It’s hard to find a list Greenville isn’t on these days.

Just this year — a mere nine weeks into 2017 — Greenville has already made the New York Times’ list of 52 places to go, was named one of Country Living’s best Southern towns for a girlfriend getaway, and was a Money magazine top pick for vacationers on a budget.

Add to that Greenville’s regular inclusion on “best of” lists for bike and walking trails, the arts, the foodie scene, business, farmers markets, downtowns, family attractions, and coolest Main Streets in recent years, and it’s evident we’re getting a lot of attention. The question is not why — we know what’s great about our town. The question is: Why now? Surely, something else is at play, too.

And that something is VisitGreenvilleSC.

“Greenville wasn’t looked at as a tourist destination. Our citizenry never believed that Greenville was that kind of place,” said Chris Stone, president of VisitGreenvilleSC, which began in 2012 to get Greenville on the radar of out-of-market leisure travelers. “We thought you had to drive or fly somewhere else to go someplace cool. Tourism was something that happened elsewhere.”

Tourism is one of South Carolina’s major industries, with an annual economic impact of $20.2 billion, according to figures released last week by the South Carolina Department of Parks and Tourism.

And Greenville’s share of it has dramatically increased since the start of the decade.

In 2015, Greenville was fourth in the state in domestic travel impact, behind Horry, Charleston, and Beaufort. Visitors spent $1.145 billion in Greenville County, or 9.1 percent of the state’s lucrative travel market share. And that’s without having a beach or a heavy concentration of golf courses, two of the state and region’s top built-in tourism magnets.

Accommodations tax revenue, collected on hotel rooms and other lodging, has increased by 65 percent in the city of Greenville, 44 percent in the county. Hospitality tax revenue, a tax added to bills for prepared food and beverages, has increased from $6.85 million in 2011 to $9.67 million in 2015. Thirty percent of restaurant sales come from visitors.

More evidence that Greenville is attracting tourists on top of the business travelers it has always drawn is a change in hotel occupancy patterns, according to Jennifer Stilwell, VisitGreenville’s executive vice president and chief strategic officer.

In years past, Greenville hotels had more guests during the week than on weekends, indicating most visitors were in town for business. Over time that has shifted, especially downtown, with hotel occupancy rates countywide increasing from 58 percent in 2008 to 73 percent in 2016, dramatically outperforming state, regional, and national figures.

“We’ve gone from zero to one of the South’s hottest tourism destinations,” Stilwell said.

Twenty years ago, Chris Stone recognized that Main Street had the potential to draw tourists to Greenville. He just had to help others see the same thing.

“I tried to elevate the aspirations. Whatever they were trying to do, I encouraged them to do better,” he said. “Whatever we did, we needed to do it to the degree that a visitor would say it was great.”

And then Falls Park was completed in 2004.

“That was the turning point in getting the destination to the point that there were enough things to do in Greenville to be attractive to tourists,” Stone said. “The restaurant scene began to flourish. The Peace Center began to have shows. The arena popped up.”

But the challenge was that few people outside of Greenville knew about what the city offered.

“We didn’t do Main Street for it to be a cool place, but it was. We didn’t think about becoming a tourist destination, but we were. The problem was nobody knew,” Stone said. “It wasn’t that Greenville had a negative connotation. There was zero connotation.”

But 60 couples from Atlanta convinced Stone that Greenville had something to sell. In the early 2000s, VisitGreenvilleSC, known then as the Greenville Convention and Visitors Bureau, brought in the couples over two weekends. Before they went home, they were asked if they’d spend the weekend in Greenville and all of them said yes.

“That proved to me Greenville had something to sell,” he said. “The beginning days were harder because people thought Greenville was a place for football games or weddings, not for the weekend.”

In 2012, in came Stilwell, an advertising agency veteran, to market the product.

“Greenville is a classic business story. The product in our case is the destination and experience. The product became good, then it became really good,” Stone said. “But the marketing challenge was nobody knew about our really good product.”

When Stilwell asked what her marketing budget was and was told $30,000, she thought she had made the biggest mistake of her career. “We’re competing against markets that are dramatically outspending us and who have been advertising for 15, 20, 25-plus years,” she said.

“Greenville is a virgin brand in terms of telling its story,” Stilwell said. “We literally had to create Greenville’s story.” And with no real advertising budget, she knew she’d have to rely on an incredibly aggressive public relations campaign that has become Greenville’s calling card: “Yeah, That Greenville.”

The catchphrase was meant to help distinguish Greenville, S.C., from the other 35 Greenvilles scattered across the country. “At the time, none of the Greenvilles stood out from the rest. People would end up at GSP [Greenville Spartanburg International Airport] thinking they were in Greenville, N.C., and vice versa,” Stilwell said. “The question was how do you use that as an advantage?”

While Greenville residents believe their city has special and unique qualities, the biggest difference is the people, Stilwell said.

So when “Yeah, That Greenville” was launched in 2013, it set out to tell Greenville’s story. Stilwell’s meager advertising budget paid for the first television ads ever placed by the convention and visitors bureau — 2,000 spots on cable channels in 18 Southeastern markets — as well as a social media push and an outreach effort aimed at travel writers.

And they were saying a lot.

In 2016, Greenville was mentioned in 185 media outlets, exposure that would have cost $4.6 million in advertising. “Yeah, That Greenville” also had nearly 427.4 million social media impressions, an increase of 372 percent.

The campaign has made Greenville one of the South’s hottest tourist destinations — with double-digit growth — even though we don’t have a beach, a national park, a Civil War fort, or a plantation. And there’s plenty of room for growth.

“There are still so many people who don’t know about Greenville,” Stilwell said.

So far, the “Yeah, That Greenville” campaign has focused on “drive markets” in the Carolinas, Georgia, Tennessee, and Florida that are within 350 miles of Greenville, but the campaign is expanding into select markets in the Midwest and the Northeast.

“In the markets we’re in, we’re nowhere near saturation,” she said. “And there are still a lot of markets where we’re completely off the radar.”

“The challenge is to expose more people to Greenville. The markets we’re in, we need to increase our penetration. There are still a huge number of people who aren’t aware of Greenville,” she said. VisitGreenvilleSC has a return on investment in near-markets of $117 for each dollar spent. In far-markets, the return is more than $400 for each one spent because visitors from those locations are likely to spend more time here because of the distance.

Increasing awareness is just as important as ever; after all, the supply of hotel rooms in downtown Greenville is exploding.

“It’s daunting,” Stilwell admitted. “We have to make sure we create the demand to fill the rooms. We’ve got to expose more people to our message.”

Stone said in addition to the growth downtown, restaurants and hotels in the Woodruff Road, Interstate 85, and Interstate 385 area are also hungry for more business.

“The job we have is to continue to build demand,” he said. “To stay in the game, you can’t stop marketing yourself.”

Greenville’s biggest opportunities will be connectivity between the city and the mountains, parks, lakes, and hiking trails, Stone said. “That clearly fits with the vision the citizenry has, too,” he said.

Cycling provides a big opportunity as well, he said. Improving the Greenville Health System Swamp Rabbit Trail with inclement weather shelters and connecting it to Highway 11 with infrastructure that is conducive to biking could be huge, he said.

Stone said the success of Greenville’s Main Street should serve as an example of what can happen in other places in Greenville County. Travelers Rest, for instance, took advantage of the location of the Swap Rabbit Trail to transform itself into a tourist destination.

“Travelers Rest is a wonderful example of creating a place out of something that that was nothing more than a pass-through,” he said. “We need to think about our community — Greer, Fountain Inn, Simpsonville, Mauldin, Pleasantburg, and Haywood — and talk about how to carry on the tradition of quality thoroughfares and places.”

“Main Street can serve as an inspiration,” he said. 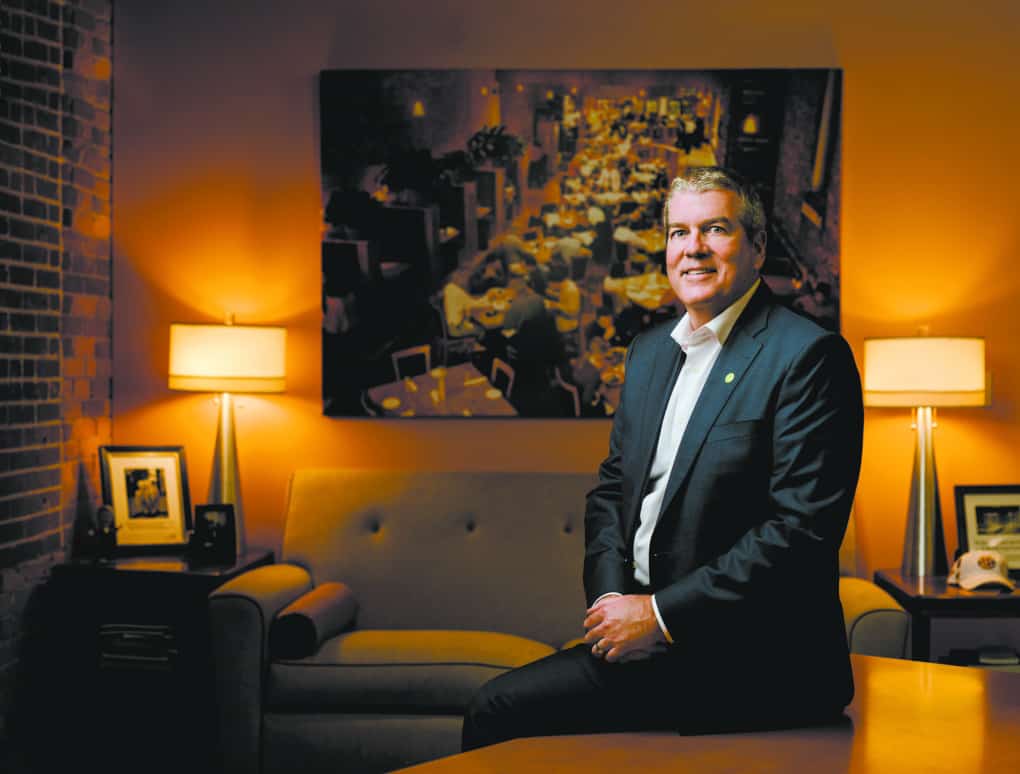 Chris Stone: The Tourist in Chief 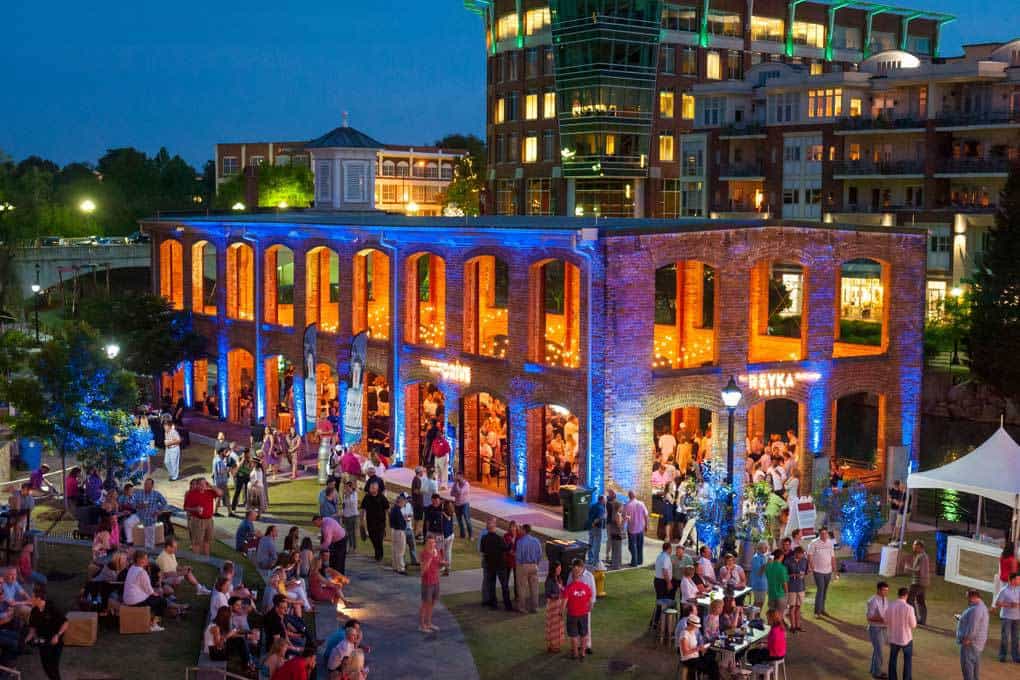 Outrageously normal? Not this Greenville