It’s difficult for us at Community Journals to watch the Jan. 17 opening of chef Greg McPhee’s The Anchorage 15 steps away from our front door in the Village of West Greenville without feeling the pride of parents watching their child take his first few wobbly steps.

Certainly we claim no responsibility for McPhee’s accomplished resumé as an alum of Husk Charleston and Restaurant 17 in Travelers Rest, or the amount of planning and work he and his crew have put in to rehab 586 Perry Ave., but as onlookers, and sometimes participants, we’ve been indirectly involved and invested in the process since its beginning.

Through our front wall of tinted windows, we’ve watched the historic building at the corner of Perry Avenue and Pendleton Street quite literally be resurrected brick by brick, header by header, for eight-plus hours a day over a period of several months. We’ve huddled by the windows as feats of engineering were undertaken to stabilize the crumbling building, instinctively ducked when a second-floor window was kicked through and heaved down from the rooftop, thudding loudly into the dumpster in the street below. We winced while watching construction workers deftly traverse precarious scaffolding.

We’ve seen McPhee and his wife, Beth, in dust-and-dirt-stained T-shirts and jeans, work alongside their crew for as many hours as they could manage, and then some, often waking in the morning and donning the same dirty work clothes they’d worn the previous day.

We marveled as artists Sunny Mullarkey McGowan and Elizabeth Kinney climbed onto a hydraulic lift and first drew and then painted the two-story high mural running the length of the building depicting a vegetable garden at the base of the Blue Ridge Mountains. They free-handed the white logo running vertically on the front of the building. That was impressive.

We dreamed (and admittedly salivated) as more details emerged about the planned locally sourced, vegetable-centric menu. As members of the burgeoning Village of West Greenville community, we’ve participated in the hopeful conversations about what such an establishment could do for the growing arts community. And as a community news organization first, we’ve jumped at every chance to inform our readers about The Anchorage’s progress, the second acclaimed restaurant in our part of town after Golden Brown & Delicious opened across the street in August. Subsequently, we’ve wondered and anticipated what the predicted level of culinary skill could do for Greenville’s exponentially growing restaurant scene.

So it’s no surprise when the soft opening was announced for the week before the restaurant officially opened, that many of us were invited, along with those in the local restaurant community and media to enjoy the first fruits of their labors.

Most of us had previously toured the restaurant in various stages of completion, even as recently as the week or two before. But, entering through the front door, and being greeted by Beth McPhee and the other friendly faces we’ve seen bobbing around the Village — some employees of GB&D, others local artists — was the first of many moments throughout the evening that confirmed the sense of community McPhee has been promoting since The Anchorage was first announced.

The white shiplap wrapping the interior walls would make Joanna Gaines of HGTV’s “Fixer Upper” proud. The whitewashed exposed brick on the exterior wall forms a simple backdrop for the blue banquette seating that runs the length of the first-floor dining room and the original art curated by Village studio Art & Light, along with a stunning moss piece created by Kendra Schirmer of Laurel Creek Florals. Schirmer is also a server. 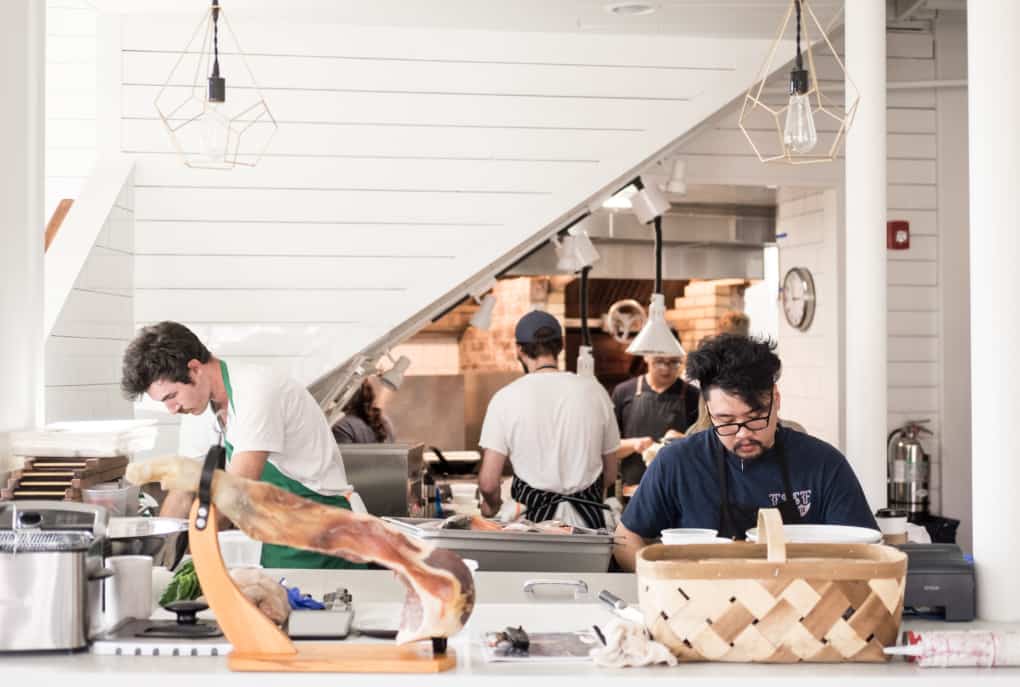 To the right of the dining room entrance, the open kitchen teaming with staff is a white hot-spot of quartz, tile and stainless steel in the otherwise farmhouse rustic interior. Several of us who had toured the kitchen before it was completed wondered quietly amongst ourselves how McPhee’s staff would maneuver in such a seemingly small space, but after watching them in action after only a few days’ practice, we realized our concerns were clearly unfounded. Their synchronicity is helped by the fact that many members of McPhee’s back-of-house staff migrated from Restaurant 17 with him.

In the dining room, as well as in the second-floor bar that is worth a tour even if you don’t land there, the warm glow from the custom light fixtures creates an ambiance perfect for a leisurely dinner but — Instagramers be warned — inadequate for stunning food photography. But darn it if we all didn’t try to ’gram each expertly plated dish placed on our table. (Scan local social media and you’ll see a host of unfortunately orange-tinted photos from the last week).

The cardstock menu, which doubles as a placemat, is printed daily according to the exact ingredients being used with a wide variety of small plate offerings and the impressive Whole High Valley Farms Rainbow Trout for Two on the left column. In the center column are the For the Table charcuturie board (even non-paté lovers raved about the Bourbon Liver Mousse) and vegetables (Southerners rejoice: grits are included in this category). Recommended wines and whimsically named craft cocktails are listed on the right. For example, the Shiso Vain (we see what you did there) is a blend of Four Roses, Goslings Black Seal, Tonic, Ginger, Birds Fly South Lemon Bitters and Shiso. The entire wine list is printed on the back.

Since the restaurant’s walk-in refrigerator is big enough to fit only about 24-hours’ worth of fresh ingredients, the menu we tasted during the soft opening will almost certainly be slightly different than the following weeks’. In fact, the afternoon of opening night, Beth was busy printing out new menus to reflect the absence of the black garlic pureé on the Slow Roasted Muscovy Duck dish and a cabernet sauvignon substitution.

From the outset, McPhee has explained that he plans to keep a balance of local meats and fresh seafood, while highlighting local vegetables and offering vegetarian and gluten-free options.

The service was warm and attentive. The kitchen staff kept up with the demand at an appropriately leisurely pace, and the bar mixed up cocktails at the tick expected when egg-white is an ingredient.

As the last plates were cleared from the table, the sense of accomplishment and pride was tangible, both from the staff and the diners. And it was discussed by all that this new space would likely become a frequent after-work stop for a drink or two and a couple small plates, which is exactly what McPhee envisions.

If we are to believe opening night represents merely chef Greg McPhee’s first steps, we can’t wait to see him run.