Two World War II artillerymen from Spartanburg were the first allied troops to meet with Pope Pius XII after German and Italian troops abandoned the city in face of Gen. Mark Clark’s powerful assault on June 4, 1944.

The encounter came quite by accident 68 years ago, when retired Spartanburg businessman J.D. Edwards and his driver, Gus Cantrell, were scouting for a place to site their massive 240-millimeter howitzers.

Just two months shy of his 95th birthday, Edwards, who was a master sergeant on one of the gun crews, remembers the war years well. Cantrell, his driver through much of the Italian campaign, was from Fairforest, while Edwards has always lived within 1.5 miles of his current home, off Warren H. Abernathy Highway on Woodridge Drive.

“The Germans and the Italians had abandoned Rome and my driver, Gus, and I were scouting around on the north side of the city,” Edwards said. “I saw this big church and I told the driver I wanted to ride up there and see it.

“We rode up there and parked the jeep, and then we walked down some steps. We had our guns – a pistol and a little old (Thompson) machine gun. A couple of guys come running out of a little house. I didn’t know who they were at the time, but they were Swiss guards – they had these funny looking hats on and they were about a head taller than my driver and I.

“One came running up with a rifle in his hands. Cantrell, my driver, slapped it out of his hands, laid it on the ground, and kicked him in the pants. They run off and we left the rifle lying in the courtyard of the church.”

As they passed through the massive doors of St. Peter’s Basilica, it struck Edwards they just might be paying a visit to the Vatican and he stopped Cantrell from washing up in a basin of holy water.

They had free run of the largest church in the world for about a half hour, wandering through some of the most venerated rooms in the Catholic world all by themselves.

As they entered the courtyard the pair noticed a group of men approaching.

“One of them was dressed in white and about six of the other ones were in black. I guess they were the cardinals or something like that,” Edwards said.

The group approached and the man in white – “It was Pope Pius,” Edwards said – held out his hands and the procession stopped.

“Gus asked him, ‘Are you the preacher at this church?'” Edwards said. “He didn’t even answer him. He (the pope) pulled out a card and handed it to us, but that didn’t impress Gus.”

The pope told Edwards and Cantrell they weren’t supposed to have firearms at the Vatican. “We were the first persons to walk through that church with firearms, the pope told us,” Edwards said.

Gus, supremely unimpressed with the pope, said, “We’re looking for Germans. You got any Germans hiding around here?”

Again the pontiff refused to answer.

The pair returned to their bivouac and told their tale. An Italian soldier from the New York area was supremely impressed that Edwards and Cantrell had met the pontiff. He asked to borrow Edwards’ jeep. Edwards said OK and the Italian-American tore out to visit the Vatican.

He returned shortly, wide-eyed. “There’s a world of MPs guarding that place. I didn’t want any part of that.”

Later in the Italian campaign, British Prime Minister Winston Churchill visited the unit to get a firsthand look at the 240 mm guns. At 9.4 inches in muzzle diameter and firing a 360-pound projectile as far as 14 miles, they were the largest caliber guns in the American arsenal. The guns were noted for their accuracy and the devastating effect they had on fixed and hardened positions.

“While the prime minister was there, a fire mission was called in and the gun sergeant asked Churchill if he’d like to pull the lanyard,” Edwards said.

Churchill was delighted, being an old artilleryman, Edwards said, and walked toward the gun – which was being loaded with bag gunpowder.

“The sergeant said, ‘Put that cigar (Churchill’s trademark) down – see all this powder; do you want to blow us to kingdom come?’ ”

Churchill fired the cannon, which had already been sighted in, Edwards said.

“He scored a direct hit. We found out later about 75 Germans had been killed with that one round,” Edwards said.

The concussion of the massive gun blew the prime minister’s hat about 200 feet and his aides had to scramble to fetch it back, Edwards said. 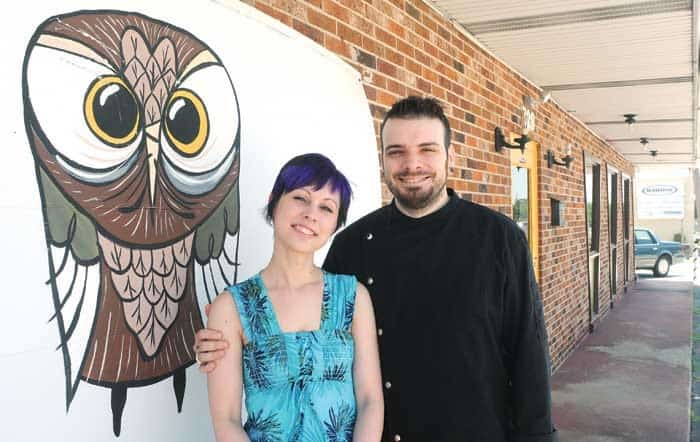 Nothing is sacred at The Owl