The corner of Henry Street and Poinsett Highway was once a juggernaut of industry in Greenville County. Home to The Piedmont Shirt Company, it employed hundreds and supported dozens of suppliers.

Today, the abandoned complex and trash-laden field is an eyesore typical of the corridor connecting Travelers Rest and downtown Greenville. But the intersection, positioned roughly between Greenco Beverage and the North Main neighborhood, is in the throes of an ambitious second act.

Posted signs state Henry Street will close, and the factory campus will be redeveloped. Various owners are involved, and rumors swirl that Furman might be in play for the front facing lot; the bottling plant next door could be related office space, a coffee shop and café.

What is certain are plans for the 65,000 square feet of warehouse and depot space that make up what’s left of the original textile footprint. It has been named Poinsett Collective, deemed “The Collective,” and its developer had little reason to dive into a massive redevelopment project 18 months ago.

Matt McClain was simply looking for some elbow room for his three businesses, Treehugger Customs, Invert Stand Up Paddleboards and Ride Garden, when a 90-year-old warehouse popped up for sale on Poinsett Highway. Most recently used for storage by Brooks Furniture, the multi-story complex whispered to McClain, showing off its best features: long tread oak flooring, masonry walls, southwest-facing rollup doors and original factory signage.

It would take tax credits to make a transformation possible and the Bailey Bill could pave the way for McClain to establish a mixed-use space as comprehensive as The Collective. The legislation (SC Code of Laws §4-9-195 and §5-21-140) stays property taxes for historic structures at pre-renovation assessment for up to 20 years, but approval can take rounds of negotiated planning to secure. 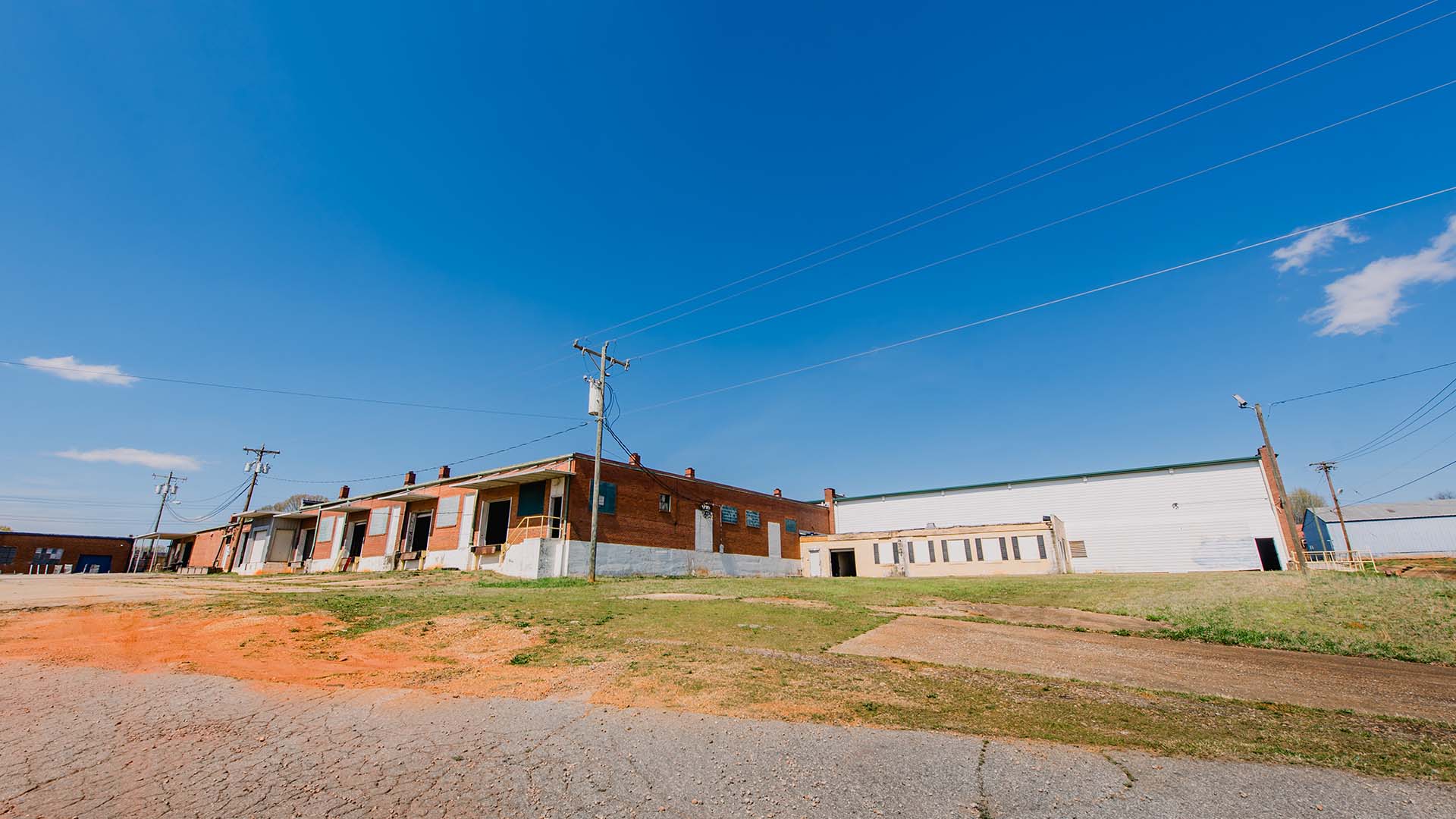 McClain was the first tenant at Hampton Station and witnessed the draw of preserving buildings of commerce. “We engaged Johnson Design Group to help us figure out the flow of our concept for The Collective. We were teed up to be under construction when (COVID-19) hit and it came to a screeching halt,” McClain says. “Lots of our potential tenants were suddenly just trying to figure out how to stay in business, not how to move over here.”

He says the pandemic afforded him time to embrace the purpose of the structures and memorialize the aesthetic that once was. “We weren’t jiving with SHPO’s (State Historic Preservation Office) guidelines. We wanted to blow out walls and create new-looking spaces; (COVID-19) gave us the time to rethink it,” he says.

McClain pulled the application and regrouped. 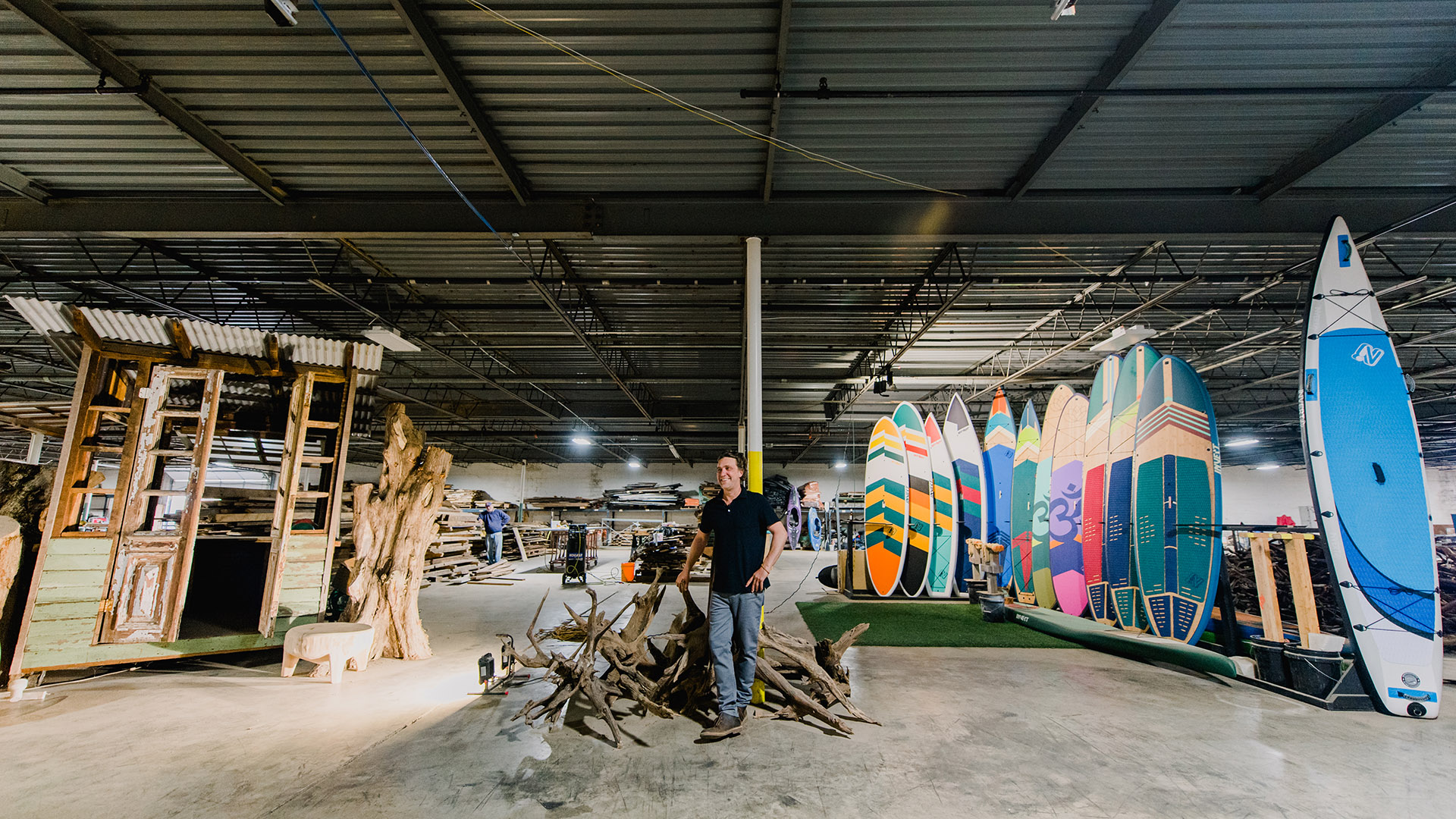 The buildings were designed for shipping and distribution. Shepard Saltzman built the complex beginning in 1938 for his growing company, The Piedmont Shirt Company. The Russian immigrant set a new employment standard in Greenville County paying high wages, hiring women, including Black women, and offering life and health insurance and paid time off for every employee. The building has a proud and storied past. Each floor has its own “interior street,” and McClain can envision the bustling lane of people, equipment and vehicles during business hours. Storerooms still contain massive fire doors, and structural poles and doorways throughout are painted safety yellow. This was a place that cared for its people.A basement break-in revealed yet another surprise: the outline of casement windows and exterior wood siding beneath metal housing. McClain realized The Collective could work in the same configurations that Saltzman’s employees did, just a century later.

“The Bailey Bill rewards protecting the historical imprint of a space and that’s exactly what we plan to do now,” McClain says. “We can’t touch anything until we get approval but then, it’s on. I can’t wait to start.” 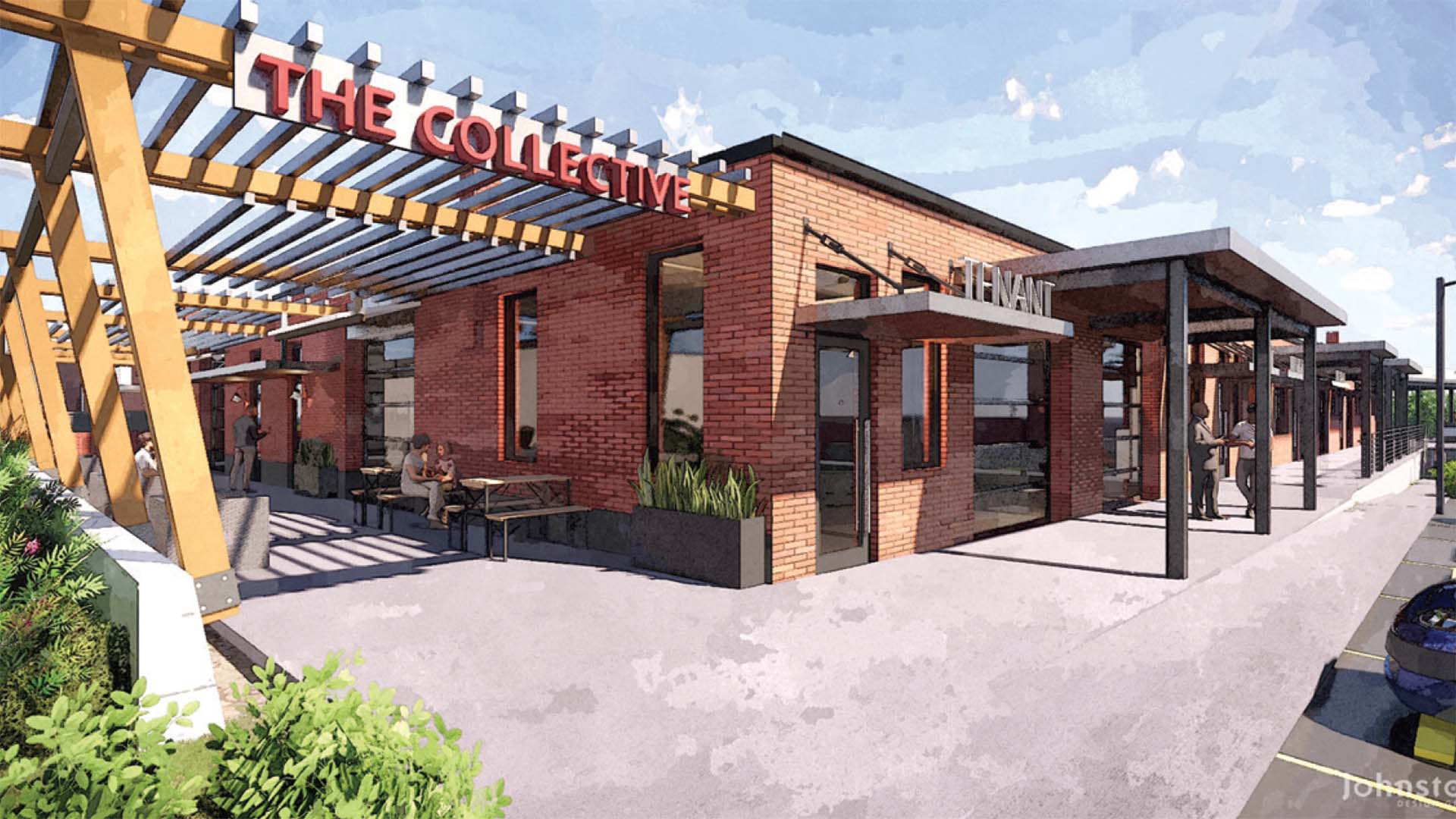 The end game is to enhance the utility of the buildings, courtyard and lawn to fit the needs of a modern community of like-minded tenants, from a dozen art studios to an 80-seat restaurant, bar, brewery and possible music venue. The “backyard” could host a biergarten and parking abuts the future orange line of the Prisma Health Swamp Rabbit Trail. A pump track is planned, and an alley strung with lights and café seating.

Jeweler Tanya Stiegler is tenant number one. McClain’s businesses have moved in, too. Distinct Cider Room is hoping to make The Collective its new home; it would mean triple the ciders on tap and room for craft beer, bottled and canned cider, and seating both indoors and out. 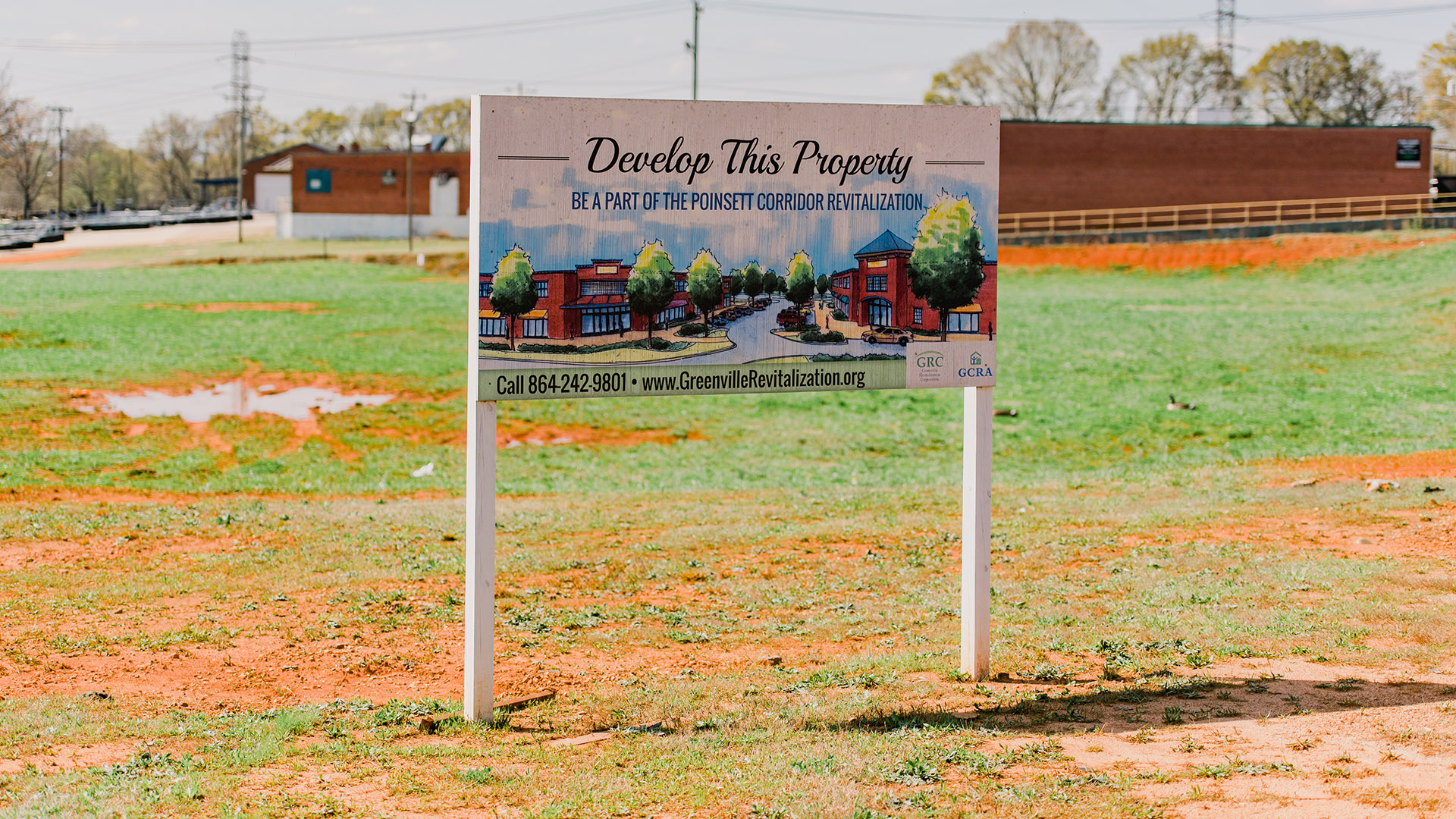 A Main Street restaurant is revisiting a move to The Collective and a brewery is coming to walk the property. McClain admits everything hinges on Bailey Bill approval. “Historical tax credits are so important because we want entrepreneurs, crafts-people and women-owned businesses to be here. We can only attract them if we’re able to predictably control our costs moving forward,” he says.

The Collective’s first purveyor will be Naked Pasta. Proprietor Chris Barest has announced the fast-growing pasta company will relocate to The Collective as soon as upfit is approved and completed.

“We’ll have pasta-centric groceries, onsite wine and beer with apps and antipasti,” Barest says. “We manufacture pasta, so come watch us make it and have a drink and a snack. Take home dinner to bake or go to a restaurant in The Collective. We plan to be a family of businesses here; the community is a big part of the draw for us.”

She selected the back corner off the alley for Naked Pasta; it’s about 2,000 square feet, at grade level, with beautiful light coming off the trail and more room than her company has ever worked in.

“Our incubation kitchen, and its location in the Village of West Greenville, helped us to grow as much as we have in three short years,” Barest says. “Moving to The Collective lets us take it to the next level in a high-profile location we can call our own. Plus, we won’t get all the calls from our customers asking us where to park.”

Parking will not be a problem at Naked Pasta’s new home. Henry Street’s closing adds acreage to the front lot and increases parking for the complex overall, but The Collective has enough parking as it stands today to support 20-plus tenants; there are 200 parking spaces behind the warehouse structures, more than double the public parking offered by similar mill projects. Goldsmith Street will become the development’s new intersection with Poinsett Highway, offering easy access to points of interest.

“We’re creating a place for people to recreate,” McClain says. “We are where we want to be forever.”

In the distance, the towers and smokestacks of Southern Spinning, Poe Mill and Hampton Station are clearly visible one after the other. The history of the county seems very much alive, once again.

Dr. Judith Bainbridge has researched the history of the site extensively. One surprising discovery was that The Piedmont Shirt Company was Max Heller’s first employer. The following is an excerpt from her findings:

The company’s male employees included Max Heller, an Austrian Jew who fled from the Nazis in 1938. Saltzman hired him at the request of Mary Mills, who had met the young man at a dance in Vienna the previous year. When Heller arrived by train in Greenville with $1.60 in his pocket and very little English, he was greeted by Miss Mills and Saltzman before immediately starting work as a sweeper at the factory. Company manager Harry Abrams, whom Saltzman had brought from New York, gave him a home. Saltzman later helped Heller save his parents, who also escaped from Europe and settled in Greenville, and he also hired Max’s father. Heller went on to become a supervisor and then vice president of the company before starting his own apparel factory in 1945. After he retired in the 1960s, he became one of the city’s most important leaders, and as mayor was responsible for much of Greenville’s revitalization. 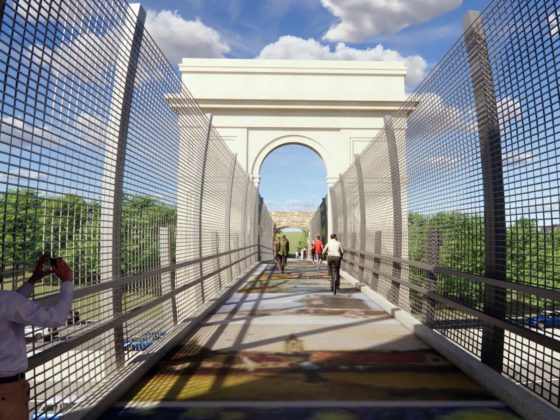