The data, highlighted by the Center for Educator Recruitment, Retention, and Advancement’s Annual Educator Supply and Demand Report, paint a troubling picture for South Carolina schools that worsens each year.

South Carolina has contended with a growing number of teachers leaving classrooms for the past seven years, exacerbated by a declining rate of students graduating with education degrees. 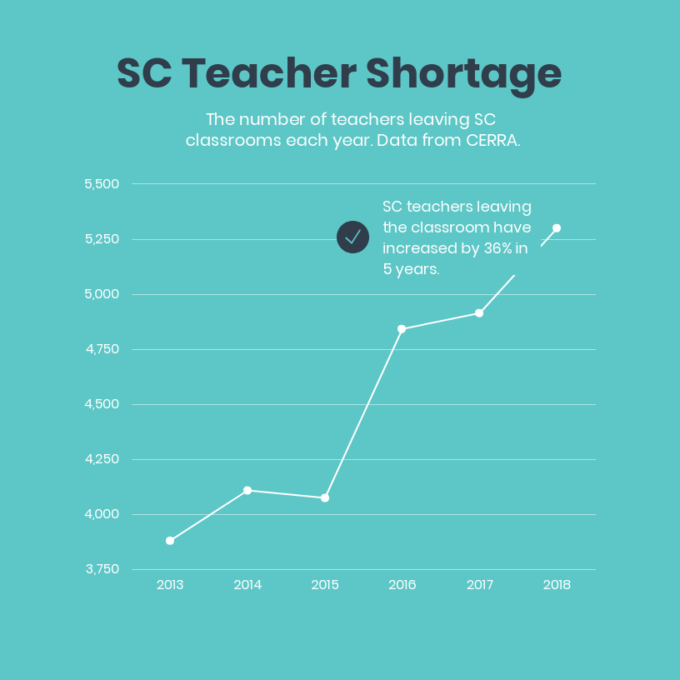 The number of students graduating each year with a teaching degree has dropped by 32 percent since 2012-13, while the number of total teaching positions has slowly increased.

The report, released the same day teachers in the Los Angeles Unified School District went on strike for the first time in 30 years, emphasizes a statewide shortage of teachers amid concerns shared by educators nationwide over low pay, large class sizes, and an increasing number of standardized tests.

Jennifer Garrett, coordinator of research and program evaluation with CERRA, said the term “teacher shortage” wasn’t used in the report until a few years ago.

“Three, four years ago in the report is probably the first time we even said ‘teacher shortage,’” Garrett said. “I think it’s [come] over time, and I think it’s really concentrated in the last few years.”

Districts reported 621 teaching vacancies at the start of the 2018-19 school year — a 16-percent increase from the year before.

This year, state legislators have promised education reform — less than a week into the 2019 legislative session, more than a dozen bills have already been filed regarding teacher compensation and retirement benefits.

Garrett said teachers don’t go into the profession thinking they’ll make a lot of money, but a pay bump could still make a small impact.

Outside of low pay, Ansel Sanders, president and CEO of Public Education Partners, points to trust and respect as two major factors in the teacher shortage.

“That old adage, ‘If you can’t do anything else, you should teach,’ that is a statement that I think defines a lot of how we think about our teachers and how we value teachers,” Sanders said. “I think everybody would say they value teachers and respect them, but I think we have to align our policies and practices if we’re very serious about that. You’re seeing the shortage as a symptom of a deeper challenge to the profession itself.”