Lillian Brock Flemming knows that as a single vote on a seven-member City Council, she can’t accomplish much by herself. But her ability to work with residents, fellow council members, and the private sector has allowed the veteran council member to get things accomplished.

“One person can lead the charge, but they can’t do it by themselves,” said Flemming, who has represented District 2 since 1981 and is seeking another term. “My vote alone is just that — one vote. But as a team, we’re solid.”

Flemming, a Democrat, faces opposition from at least one challenger. Commercial banker Matt Cotner will run for the District 2 seat as a Republican.

District 2 snakes its way through the city, touching three other districts, and includes parts of North Main Street, the Southernside neighborhood, West Greenville, the West End, part of Augusta Street, and the Pleasant Ridge area. 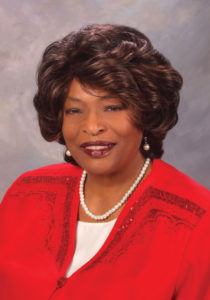 Flemming said she’s proven she can get things done during her time on council, the most recent examples being her spearheading the effort to get City Council to earmark money for affordable housing and City Park, the massive park planned for west of downtown.

“The new park is something we’ve been working on for a long time and it is much needed,” said Flemming, who pushed for council to earmark up to $2 million per year in tourism tax money for 20 years to pay for the park. “It’s important that it be a true park of its own, not just an extension of Cleveland Park. It needs to be a new entity that has it’s own feel and look.”

More money for affordable housing is key, too, especially in District 2, which has felt the affects of downtown’s rapid residential development. “Greenville’s not unlike hundreds of other cities where private investors look for opportunities, normally upscale housing. It can change the demographics of a neighborhood,” she said. “We have to make sure Greenville is a city in which people of all incomes can live.”

One way would be through inclusionary zoning, Flemming said. The city is pushing for the state legislature to pass legislation that would allow municipalities to offer developers incentives such as increased density for putting affordable housing units in their developments or contributing to a fund that would be used to build affordable units elsewhere.

Other issues facing the city are improving the quality of the Reedy River, one of the main reasons for City Council’s decision to move the public works complex on Hudson Street and turn the area into a park, and paying the increased costs of employee insurance and retirement plans.

In addition, she said, the city must be smart about growth. Programs to help low-income homeowners stay in their homes are just as important as programs to increase the number of affordable housing units.

“I’m accessible, dependable, and have great knowledge of the community and its assets. I know the history of why some things work the way they do,” she said. “I find out what the people want and don’t assume I know. I’m a community servant.”

Flemming is an employment recruiter and former teacher for the Greenville County School District. She attended Furman University, where she was one of the university’s first African-American students, and earned her bachelors and masters degree in education.