Imagine an innovation district that would be home to tech startups, small and medium-size businesses, and an expanded higher education presence, creating a tenant pipeline for downtown.

How about eliminating the cloverleaf exit ramps from Church Street, redirecting traffic, and freeing up for development the prime real estate now used for the interchanges? Or turning the area under the Church Street bridge into a park — perhaps creating a downtown dog park — and entertainment district.

Those were some of the ideas included in a draft of Greenville’s new downtown master plan unveiled by Pittsburgh-based urban planner Urban Design Associates at the end of a series of charrettes last week.

The city’s downtown master plan hasn’t been updated since 2008.

Mayor Knox White said following the city’s downtown plan from 1997 has played a key part in its success today. That plan called for residential development, design guidelines, more retail, public art, and reclaiming the Reedy River and the falls.

“Following that plan created the magic that is downtown Greenville,” he said.

The new plan could have the same impact, White said.

Downtown Greenville is a blend of vintage town transformed into modern city that has happened in a relatively short time span, said Rob Robinson, managing principal of Urban Design Associates.

“The momentum is getting faster and faster,” he said.

Robinson said he doesn’t think the growth to stop. Expected population growth of mostly higher-income residents is likely to exceed the supply of market-rate multifamily residential, generating a demand for 2,400 to 3,000 additional units by 2028.

But the new, luxury residential offerings and a lack of affordable-living options downtown are deepening the city’s existing racial and socioeconomic inequality, Robinson said. The median household income for whites living downtown is $61,000, compared with $16,000 for blacks and $18,000 for Hispanics.

Robinson said the new downtown plan would focus on attracting entrepreneurs into downtown, improving connectivity and access to jobs downtown, and improving parking availability through better management. In addition, he said the plan would direct development to appropriate locations for scale and context.

Robinson said the highways coming into downtown such as Academy, Church, North, and Buncombe should be “tamed,” transforming them into urban streets instead of thoroughfares. College, Academy, and Beattie streets create a “bunch of islands” that make Heritage Green feel like a remote location, even though it is mere blocks from Main Street, he said.

The planners recommend making College Avenue and Buncombe two-way, with three lanes of traffic, one of which can be reversed during peak hours, and parking.

“It would be a passage to downtown’s most valuable assets instead of a thoroughfare,” he said. “It’s all about speed and behaving nicely when you’re downtown.”

The draft plan calls for protected bike lanes. “It’s not adequate to paint it on the streets,” he said.

Robinson said the city has a big need for small pocket parks downtown so residents don’t have to go to the bigger parks, and its trails network should be expanded.

With its available vacant land, the eastern part of downtown, behind the Camperdown development, could be home to an innovation district that could house an expanded higher education presence and tech startups, and small and medium-size businesses with growth trajectories.

An innovation district would blend into a changing emphasis when it comes to filling office space, White said. “That’s not to say we won’t recruit corporate headquarters. We will. But we want to move to the forefront our growing tech industry,” the mayor said.

In addition to office space, the innovation district would include some residential, Robinson said.

The area under the Church Street bridge could be turned into a dog park to answer downtown residents’ desire. The area could also become an entertainment district, he said.

Robinson called Buncombe Street “a NASCAR route through your city.”

But, he said, it doesn’t take much to make the Buncombe Street-Stone Avenue area a more livable space.

The key, he said, is transforming the road into an urban boulevard and enhancing walkability to the area around Heritage Green.

Robinson said the plan could include transforming the intersection of Stone Avenue and Buncombe Street into a coherent downtown district with a roundabout and on-street parking.

Because the area of Augusta Street and the southern part of downtown has so much undeveloped land, it will become the focus of new development; but Robinson said the city doesn’t want to lose the “funky” character of the area.

He said the neighborhood south of Augusta is getting a second life as a single-family residential neighborhood. But it’s a place where coherent connections east and west, and north and south, could be made.

It would be a place in which a capillary system of trails could be built. He said that requiring wider setbacks would allow multi-use paths that could connect neighborhoods and the Swamp Rabbit Trail.

Unity Park and the West End

Unity Park, the city’s new, $40 million signature park on the west side of downtown, should be knit into the existing residential areas, Robinson said.

“This is a big deal,” he said. “It’s another one of those moments in Greenville’s history that people will refer to.”

The north side has a good mix of residential housing and provides a place for workforce and affordable housing, Robinson said. The park’s south band could house a series of maker spaces for artists and small business, and for urban agriculture.

Downtown resident Sarah Schoonover said having an outsider come in allows the city to explore possibilities it may have missed and identify problems it may otherwise overlook.

“I love the idea of an outside, objective set of eyes looking at problems I don’t see as a resident,” she said.

She said the idea of taming downtown’s bigger streets is a good one.

“They are doing us a disservice by segregating the various pockets of downtown,” she said. “It’s keeping us from being very walkable.”

Allison Day, another downtown resident, said she likes the idea of growing parts of downtown together to help it flow better. Kim Tompkins, who lives outside the city but works inside it, said she liked that the plan was not just thinking about buildings, but also reworking the streets to help with flow.

But community activist Yvonne Reeder said she’s concerned the city is catering to attracting newcomers and is avoiding necessary things to retain the people who have been here.

“The hometown people — we’re left out,” she said. “We need to avoid unintended consequences. We really need to think through the effects these changes will have on existing residents. It’s a slippery slope. It has to be balanced, and I’m missing the balance.”

The plan is expected to be finalized and go before the city’s Design Review Board and Planning Commission during the first quarter of 2019. 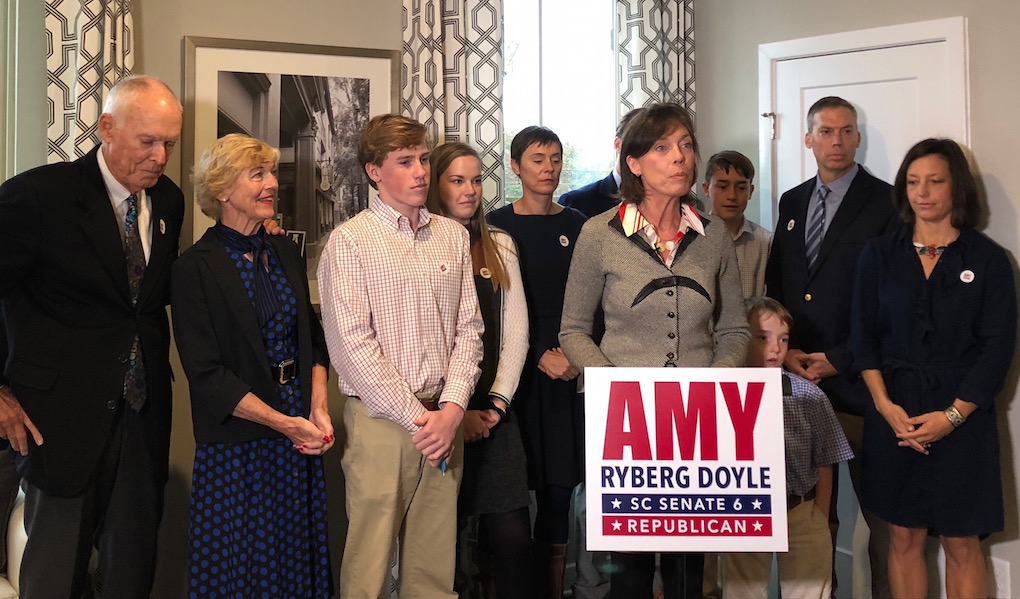 Incumbent Greenville County Schools board members will keep their seats