Editor’s note: Like many areas across the country, Greenville saw its fair share of protests in recent months. This story highlights the protests and the process, not the message protesters are delivering. The Greenville Journal is proud to be a news organization that is with, for and about Greenville. We have been, and will stay, fair and balanced in our coverage of what is happening in our city, county and local communities. As always, I invite you to reach out with any feedback, questions or concerns. Sherry Jackson, Executive Editor

At the entrance to Falls Park, in front of the Peace Center, spread out like a fan on the steps of the old courthouse, protestors have gathered to push for social and political change. In this summer of demonstrations, downtown Greenville has been their rallying point.

Since the right to protest is protected under the First Amendment, the city doesn’t have the ability to approve or deny people from gathering on public property, said Mayor Knox White.

“The only time we have some real control is when someone wishes to ‘picket,’ which is where you actually move along on the sidewalk or parade in the street,” White said.

Under Greenville’s picketing ordinance, organizers must provide the city with advance notice of the event by submitting an online notice to picket. Depending on the size of the expected crowd, the notice must be submitted anywhere from three hours to 7 days ahead of time. Organizers must also give a time frame for the event, estimate the number of participants and provide their contact information.

“We try to keep an open line of communication constantly with the organizers,” White said.

Since June 1, 64 pickets have been filed, with seven more scheduled through Oct. 10, according to data provided by the city.

Their rallying cries have been loud and varied.

Thousands have marched for police reform and racial injustice in the aftermath of the killing of George Floyd in May. Floyd, who was Black, died after a white Minneapolis police officer knelt on his neck for nearly eight minutes.

Protesters have called for the removal of the Confederate war statue in Springwood Cemetery or demanded that the memorial stay. They’ve pushed for the return of sports and extracurriculars in Greenville County Schools and urged the repeal of the state’s Heritage Act, which protects war memorials and monuments on public property. One group submitted a picketing notice for “Christian patriotic conservative values and constitutional rights” at the amphitheater at Falls Park. Another demanded justice for Vanessa Guillén, a U.S. Army soldier in Fort Hood, Texas, whose murder has sparked a national outcry.

And yet, despite the sheer number of rallies and marches, White said Greenville’s demonstrations have lacked the vandalism and violence that have rocked other cities.

He credits Greenville’s success to the police department’s procedures and de-escalation tactics.

When the siren chant of “No justice; no peace” from thousands of protesters gripped downtown Greenville in a series of protests at the end of May, White said the police department and county Sheriff’s Office had anticipated that there might be trouble after the events were over.

“And that’s exactly what happened,” White said. “There was a crowd that arrived around 11:30 p.m., several hours after the protest march with George Floyd was over with; we had to engage them and at the same time finally had to move them along.”

As of the end of August, the city has paid out $175,000 in overtime for police and fire personnel to staff the protests, according to a city spokeswoman.

Protest organizers gave conflicting opinions about the city’s handling of protests this summer.

In June, Thomas Daniels of Upstate Peace Keepers planned a peaceful rally at Falls Park following Floyd’s death in police custody. More than 200 attended, and several City Council members spoke to the crowd. Daniels said it was his first time organizing such an event.

“I learned a lot about myself through the process — I probably consider myself more of an activist now because of it,” Daniels said.

Within a day of submitting his notice, Daniels said the city reached out to him to get a better understanding of the event. The Police Department also contacted him two days beforehand to gauge how many officers would be needed on hand.

“They pointed us in the right direction. It was easy; it wasn’t hard at all,” he said.

Bruce Wilson had a different story to tell.

Wilson, who organized the protest calling for the removal of the Confederate statue in August, said the city’s picketing ordinance was used against his protesters.

“People couldn’t bring backpacks; they couldn’t bring their pocketbooks. We had one young lady who got a ticket for having a bag with feminine products in it,” Wilson said.

Besides backpacks and coolers, the ordinance also forbids the use of selfie-sticks, aerosol containers and “any carried object that resembles or serves the purpose of a shield.”

Signs must be composed of paper, cardboard, poster board or other non-rigid materials that can’t exceed 1/32 inches in thickness or 20 inches by 30 inches in dimension, according to the ordinance. 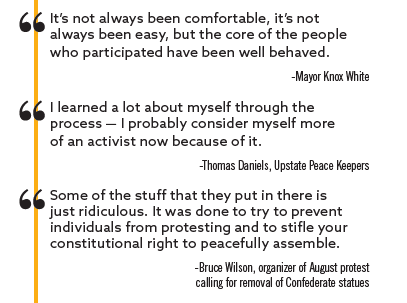 “Some of the stuff that they put in there is just ridiculous. It was done to try to prevent individuals from protesting and to stifle your constitutional right to peacefully assemble,” Wilson said.

Mike Pitts, attorney for the city of Greenville, said the picketing ordinance isn’t being used to quell First Amendment rights.

“The ordinance was the product of extensive research; it is content neutral, narrowly tailored, and calculated to balance the First Amendment rights of picketers with the city’s significant and legitimate interest in protecting law enforcement officers, motorists, pedestrians, the picketers themselves, and those accessing businesses near the site of a demonstration,” Pitts said in an email. “The city is confident the ordinance is valid and constitutional.”

There have been 64 protests filed with the city of Greenville since June 1.