I recently asked a newcomer to the area what they thought of Greenville. They replied, “Greenville is great. Let’s just hope it doesn’t get too big.”

What do you mean, too big? I wanted to ask. Aren’t you proud that Greenville has become such a hot spot? Don’t tell me you aren’t secretly satisfied whenever you share yet another Top 10 list featuring Greenville knowing that your friends in Columbia will see it. Don’t tell me you dislike the atmosphere of Main Street or the view of Falls Park. We may see pictures of the park and walk down Main all the time, but they’re still pretty awesome.

While I love the idea of Greenville continuing to grow, I also understand where the fear of becoming too big comes from. Greenville hasn’t grown just a little bit – it’s come close to doubling since 1990. In fact, Greenville County grows by about 8,000 people per year, according to the U.S. Census.

While growth brings new jobs and new housing opportunities, it’s still tough for many millennials to find either. And with growth has come added traffic, higher costs and even less parking.

The increase of individuals calling Greenville home is also affecting nightlife. In my experience, I’ve noticed casual downtown bars that once offered a laidback, fun atmosphere have become wildly packed by 10 p.m. on a weekend night, with hour-long wait lines. Bouncers who used to recognize my friends and me now hurriedly ask to check our IDs, bending them under flashlights to check for authenticity. Places like these have become so popular, it leaves millennials looking for other places to go. In the words of Yogi Berra, “Nobody goes there anymore. It’s too crowded.”

While the influx of shiny new restaurants and bars are nice, is that what Greenville is asking for? Do we need more semi-fancy establishments added to downtown, or would the millennial crowd in Greenville be more satisfied with more casual places to hang out?

The downtown lunch scene begs the same question. A few months ago, Chick-fil-A announced a new satellite location on Main Street intended for people and people working downtown. While several residents disapproved of another chain restaurant on Main, Chick-fil-A was filling a need, especially one for young professionals who might not have the time – or money – for a sit-down meal at a sit-down restaurant.

Jane Jacobs, author of “The Death and Life of American Cities,” says it well: “There is no logic that can be superimposed on the city; people make it, and it is to them, not buildings, that we must fit our plans.”

Of course, I’m not against new restaurants in downtown to try, and I feel that most millennials would probably agree. However if we’re going to keep growing at the pace we’re going and attracting more millennials to the area, we need to make sure there are enough options to meet everyone’s needs. For our generation, it’s more casual, affordable options to eat and socialize.

Greenvillians love to describe our city as the next Charlotte or Atlanta in a few decades. While I think whoever came up with this had good intentions, I don’t think it was exactly what Greenville’s city planners had in mind when mapping out downtown. Is our goal to become exactly like another town? 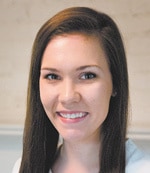 Kaitlyn Hudson is an associate at Complete PR.