Administrators with Greenville County Schools are working to determine whether to keep Woodmont High School’s International Baccalaureate program, and in a year, they’ll evaluate the IB programs at Greer and Travelers Rest high schools as well.

The IB program uses a set of standards in its courses accepted at participating schools across the globe, and IB courses in high school are generally accepted as college credits at higher education institutions.

The program was introduced in Greenville County Schools at Southside High School in 1987. Woodmont High was the second school to get approval from the district for the program in 2002, followed by Greer High School and Traveler’s Rest High School in 2003. The district is not considering axing Southside’s IB program.

Teri Brinkman, executive director of strategic communications and engagement, said all three schools’ programs were planned to be evaluated next year, but since Woodmont High has a new principal this year, it made sense to move the evaluation up. 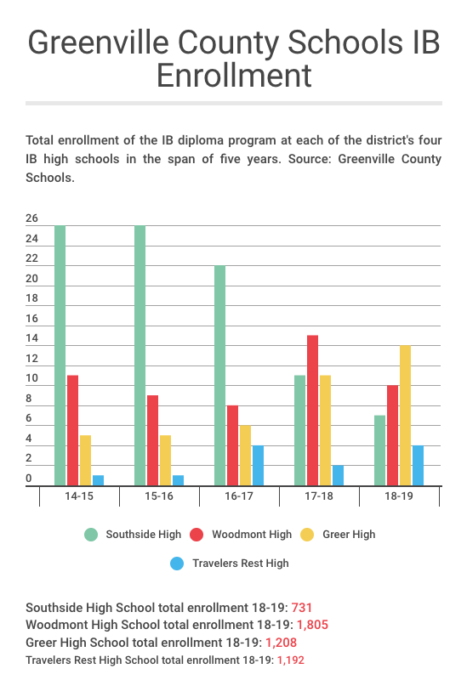 “The process with Woodmont High School was moved a year earlier because we had a principal change and the new principal would need to go through IB certification, which is a process that takes time and money,” Brinkman said. “We saw no reason to do that if there was a chance that the IB program would be discontinued and their focus would be moved to something else.”

But Brinkman wanted to make one thing clear — the district has no plans of discontinuing the IB programs and pulling those resources. If the IB program gets pulled, it will be because the community and administration express interest in another program, she said.

Enrollment in the IB programs at the three schools has fluctuated year-over-year. Currently, Woodmont has 10 students enrolled in the full diploma program, Greer High has 14, Traveler’s Rest has four, and Southside has seven.

But the schools have a higher number of students enrolled in at least one IB class who are not in the full diploma program.

Lisa Wells, Greenville County Schools board member who represents the Woodmont High area, said she’s heard people from the community on both sides of the argument — some want to keep the program while others want the school to take a different focus.

Valerie Sandoval, a 2016 graduate of Woodmont’s IB program, said it helped prepare her for Emory University, where she’s currently a junior.

“This school has people from all over, not just in the U.S., but internationally,” Sandoval said. “So originally I was a little worried my public school education from South Carolina wouldn’t be up to par with some of these private schools that a lot of these students here went to, but saying that I took IB kind of put me on the same level.”

For Sandoval, having IB differentiates Woodmont from other high schools — taking classes where the emphasis was not on one final exam at the end of the year, but on projects throughout the year, made her feel like she was on a level playing field with her peers in college.

Wells said she’s been an advocate of the IB program for years — her own children have been enrolled in the classes — but she wants the high school to have a strong focus the community can get behind with ideally higher enrollment, whether that’s IB or something else.

The district has already had a community meeting at the high school, received faculty input, and administered a survey about the program. The next steps will be to look at the data, discuss the results with the community in November — tentatively planned for Nov. 15 — and make a recommendation to the board sometime in December or January. 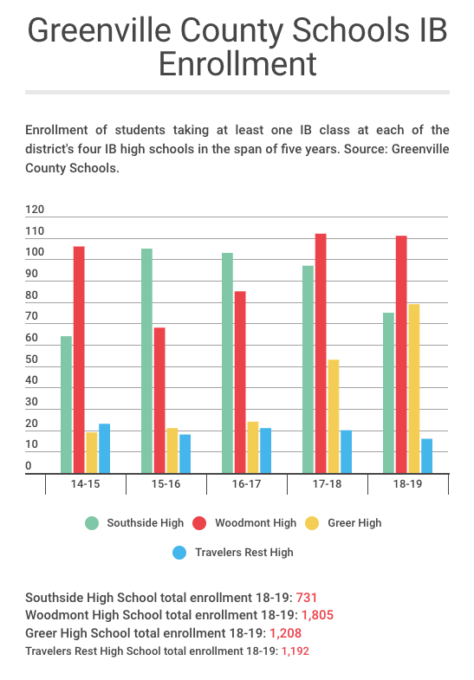