The announcement on Monday, Jan. 11, comes days after DHEC recommended hospitals to begin vaccinating patients over the age of 65. The decision applies to everyone 70 and older, not just those who are considered high-risk for the virus and its effects.

Almost 70% of the reported COVID-19 deaths in the state have been those 70 and older, according to DHEC.

The health agency said that first responders, health care workers and other people in the first phase of vaccine rollout were able to receive it. DHEC reported South Carolina has 146,500 doses of the Pfizer-BioNTech vaccine with over 82,000 doses already provided. There are about 95,000 appointments in the coming weeks for those in Phase 1a to receive the vaccine.

“Because we’ve seen a dramatic acceleration in vaccine usage and appointments in the last week, we have decided to speed things up again,” said McMaster. “We know that those 70 and older are at the greatest risk of dying from COVID-19. Making sure they have expedited access to the vaccine will help save lives.”

Dr. Brannon Traxler, interim director of public health at DHEC, said the state continues to receive weekly shipments of the vaccine from the federal government.

“When evaluating supply versus demand and as the rate of vaccines coming into the state increases compared to the rate of appointments being scheduled, we believe it is appropriate to begin scheduling appointments for additional South Carolinians,” said Traxler. “Based on current data, the mortality rate from COVID-19 for those 70 and older in South Carolina is approximately 655 deaths per 100,000 individuals. For those under the age of 70, there are approximately 37 COVID-19 deaths per 100,000 individuals. This is a staggering comparison and illustrates why vaccinating this population next is critically important in our mission to save lives.”

The vaccine can only be received at an appointment. In its announcement, DHEC provided a map of locations that will accept appointments starting on Wednesday. However, several health workers answering the phone on Monday afternoon at the locations DHEC listed said they had not been given information about the announcement beforehand and could not provide further details.

One woman at Prisma Health’s Baptist Easley Hospital said they had a meeting planned this afternoon to discuss the vaccine, while another at Prisma’s North Greenville Hospital said his office had not been given any information from his superiors about the announcement. A third pharmacy worker at Prisma Health Greer Memorial Hospital called the DHEC announcement “premature” and noted that her pharmacy didn’t even make those appointments as it’s an inpatient pharmacy.

Prisma’s spokesperson said in an emailed statement, “Our plans to help vaccinate individuals in the 70+ age group, as announced by Gov. McMaster earlier today, are being finalized. Once all the details are confirmed, the Prisma Health website will be updated. To find the site, go to PrismaHealth.org/Vaccine.”

In an emailed statement, a spokesperson for Bon Secours health system confirmed the health system would not be making appointments at their offices. “We have a task force working on reviewing all the new guidelines, and we’re working through implementing the recommendations as quickly as we can,” she said. 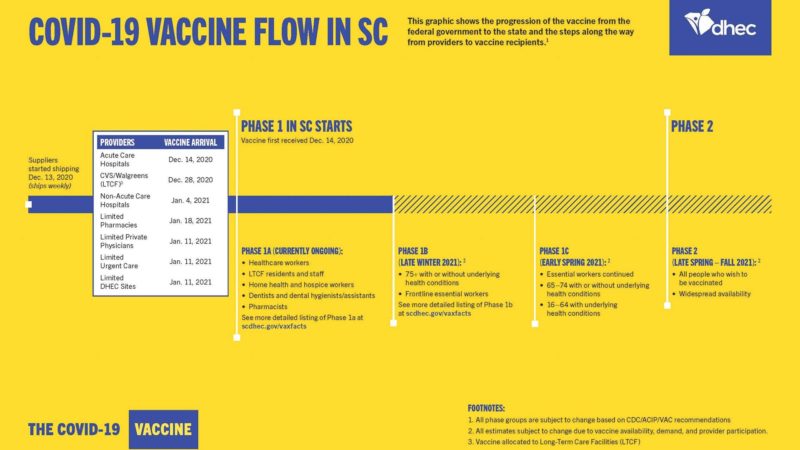