Most people would quit their jobs, buy a yacht and move to the Caribbean if they were awarded $1 million. Clemson University researchers Juan Carlos Melgar and Guido Schnabel plan to do just the opposite. They plan to grow more organic peaches.

The duo has been awarded $999,700 from the U.S. Department of Agriculture’s National Institute of Food and Agriculture to further develop a production method that could lead to more organic peaches in the Southeast, where humidity usually causes high levels of pests and diseases. The grant will be dispersed over the next four years.

Last year, Melgar and Schnabel started tying paper bags on peaches as they grew on trees, an unconventional method of protecting them from insects and disease while reducing a reliance on pesticides.

Now, thanks to the grant, the duo will expand their efforts to more orchards in South Carolina, Georgia and Florida as well as collaborate with University of Florida and University of Georgia researchers.

“This project will provide organic peach growers and growers in transition to organics in the Southeastern U.S. with an innovative strategy to increase peach orchard productivity and economic returns; to produce high-quality, low-residue peaches; and to reduce reliance on insecticide and fungicide application,” Melgar said.

Melgar and Schnabel first got the idea to bag peaches in 2012 and teamed up last year to win a grant from the USDA’s Southern Region Integrated Pest Management to test the production method, which had previously been used only in Asia and Europe.

In April 2015, about four weeks after the peach trees bloomed in South Carolina, the duo placed wet waxed paper sandwich bags on trees at the Musser Fruit Research Farm in Seneca and two farms in “The Ridge,” which is South Carolina’s predominant peach-growing region near Edgefield, Saluda and Lexington counties.

Melgar and Schnabel compared two different models – one that left the peaches bagged until harvest and another that involved removing the bags 10 days before harvest – to a control group of peaches that was not bagged at all. The researchers have repeated that process each spring.

Comparisons of the two testing models revealed that bagged peaches, specifically the peaches that were bagged until harvest, had less incidence of brown rot and insect damage than the peaches without bags.

The two researchers have found that the sugar and acidic content are the same in bagged peaches and peaches grown with pesticide applications. Melgar and Schnabel have also found that the weight and size are the same. But there is one slight difference.

“For some varieties there are no differences at all, and for some other ones we get a little less intense blush,” said Melgar. “I would not call it yellow. In countries in Asia, some people use dark bags and these ones don’t let as much light go through so they get uniformly yellow peaches,” he added.

Melgar and Schnabel use white paper bags, which let light through.

The bags could be the answer to fungicide resistance, a costly problem in which diseases adapt to pesticides, rendering them ineffective, according to Melgar. The bags could also limit skin disorders caused by pesticide residue, acid rain or heat stress. That could reduce post-harvest waste and create more marketable peaches for farmers.

Melgar and Schnabel believe that bagging peaches could reap economic benefits. “There is great demand among customers for organic peaches, but production of organic peaches is concentrated in western states, such as California and Washington,” Melgar said.

“We don’t know yet if this can be done on a large scale in the Southeast, but we will find out,” Schnabel added.

Bagging peaches might not displace pesticide applications in large-scale applications, but it could create a niche business for farmers that would serve health-minded consumers willing to pay a premium for chemical-free produce.

“For conventional growers, I could imagine people bagging some fruit and selling them as priority peaches or low-residue peaches for a premium. I could also imagine that this could be a key component for organic producers, who currently don’t really have the tools to produce quality fruits,” said Schnabel. “Those bags might be the answer.”

Since last year, Melgar and Schnabel have surveyed consumers at the Clemson Farmers Market and a fruit stand near the university. Participating consumers were shown two batches of peaches and asked which one looked more attractive. 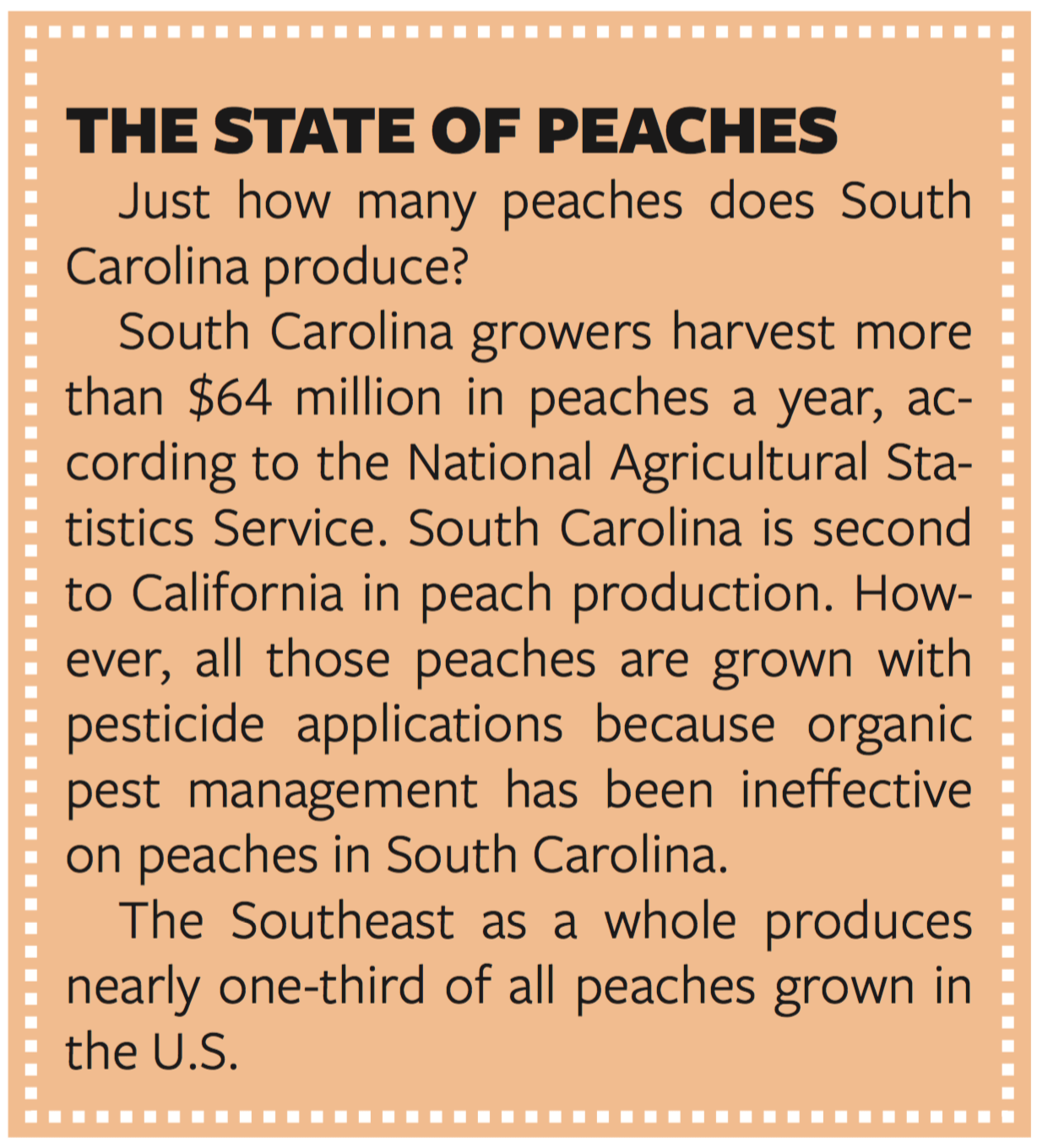 In one instance, the duo found that most of the surveyed consumers preferred blush-red peaches to peaches grown in bags. However, after being told the bagged peaches were free of chemicals, most consumers changed their mind.

Melgar and Schnabel also found that those consumers were willing to pay a premium of up to $1 per pound, which is 80 percent more compared to conventionally grown peaches.

But the researchers have calculated that farmers might have to sell bagged peaches for around 10 to 15 cents more per pound than conventional peaches to make up for the increased labor costs of bagging peaches. For that reason, the two researchers are working to determine if consumers would pay enough of a premium.

Melgar and Schnabel are also trying to assess how much it costs for different amounts of acreage; how pest populations and spray programs can be reduced and the impacts of that deduction on beneficial insects; the disease incidence in organic bagged peaches versus organic non-bagged peaches; and the peach varieties that grow best when bagged and what the best timings are for placing and removing the bags.

Throughout the next four years, Melgar and Schnabel plan to repeat the application and survey process each spring and summer. The duo also plans to present their findings at various horticulture conferences and growers meetings throughout the Southeast.

In the meantime, Melgar and Schnabel have prepared a fact sheet for organic growers who are interested in adopting the production method. Also, Clemson recently started selling peach bags for interested growers.

“We have already been contacted by some growers in other regions of the country, and in Canada that are interested in using bags in their orchards. So there is interest on this strategy already,” Melgar said.