To say Merle Johnson has a diverse background is an understatement.

Johnson, who joined the city of Greenville as its new economic development director on July 6, replaces Nancy Whitworth, who retired in January after a 40-year tenure.

“The city has got a lot going on,” Johnson said during a rare break in what has been a whirlwind month. “I feel like I’m truly drinking from the fire hose right now.”

Johnson, 46, previously worked for the Charleston Regional Development Alliance and Charleston County Economic Development, where he served as the deputy director. Prior to that, Johnson had a manufacturing background, working as a production supervisor at a glass manufacturing plant in Richburg, South Carolina, before moving to Charleston for a job at Unitech, a defense contractor that provided maritime security training at major ports around the country.

“I guess it took me a while to find my home,” Johnson said.

Born in Seoul, South Korea, to an African American father and Korean mother, Johnson grew up as a military brat and lived all over the world.

He attended the U.S. Coast Guard Academy in New London, Connecticut, before joining the Coast Guard as a deck watch officer. Many years later, Johnson would reconnect with his Coast Guard roots at the company Unitech.

Staffed entirely by former Coast Guard officers and maritime experts, Unitech at the time had just secured a $7 million contract for an anti-terrorism and crisis training program at 24 of the country’s 40 major ports, according to an article in the Post & Courier newspaper. The company was later acquired by Lockheed Martin in 2009.

But it was Johnson’s unusual background that ultimately led him to a career in economic development.

“Economic development is not just a team sport; it’s also very relationship driven, and I can relate to people,” Johnson said. “Because I have such a diverse background, that’s what got my feet in the door.”

Johnson already had seven years under his belt at Charleston County Economic Development when he learned of the opening in Greenville and decided to apply.

He had vacationed in Greenville a handful of times before and loved the small town, big city feel. He also liked how walkable the city’s downtown was, and as a father to three school-aged boys, valued the good school system.

“Let’s be honest — Main Street is incredible in how it’s grown,” Johnson said. 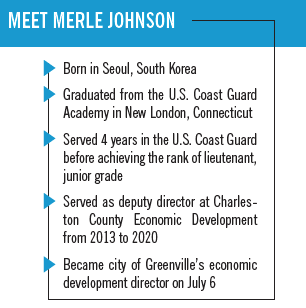 In his new role at the city of Greenville, Johnson said he’ll focus on filling in the office space downtown and assist in growing Greenville’s fledgling high-tech and entrepreneurial startup space. The city is already off to a great start with the NEXT Innovation Center and the venture capitalist firm VentureSouth, Johnson said.

Another priority for Johnson is workforce development, which means working with Greenville County Schools and Greenville Technical College to ensure the next generations of workers “are able to take any job that we land.”

“You’ve got to be able to staff up the type of industries and companies that would be looking at the city of Greenville,” Johnson said.