Jamie and Tim Brockman’s journey as parents has been as unique as the family they’ve created. The couple had three biological children, Grace, 16, Charleigh, 12, and William, 9, punctuated by rounds of fertility drugs and heartbreaking miscarriages, before realizing the best way to grow their family would be through adoption. That decision changed their lives in unexpected ways.

The family moved from Cincinnati, Ohio, to Greenville seeking a warmer climate to facilitate pain management for a collagen disorder Jamie Brockman and her biological children have. Starting over in a new city after taking an 85% pay cut hardly seemed the best time to adopt, but the Brockmans moved forward, pursuing international adoption. They were drawn to the profile of Dennis, an 18-month-old boy in China with a more severe form of the condition.

“If you’re not familiar with it, it seems scary, but we had already adapted. It was part of our life,” says Jamie Brockman.

Around the same time, the Brockmans began mentoring with Fostering Great Ideas (FGI), a nonprofit that works to improve the lives of children in foster care. Jamie Brockman met Jasmine, who would become their first foster child. It was obvious to the Brockmans, then 30, that they were too young to be parents of a teen, but her situation was dire.

“She was having trouble at her foster placement and would be sent to a group home in Columbia. At that time, we knew that would destroy her,” Brockman says. “We said, ‘We’ll foster her, she’ll be 18 soon.’ She moved in a week before she turned 17; at 17 and a half we adopted her. Ten days later, we got on a plane to get our son.”

Kimberly is an adult now, but chooses to remain anonymous. She was in foster care in South Carolina. Here’s what she has to say about luggage: ⁠ ⁠ “I didn’t get 10 mins or a trash bag of my clothing. I went to my first group home with the clothing I had on my back. I didn’t get to grab family pictures or my favorite hair brush or my school supplies. Getting ripped from the only life you know and expecting to just accept it is hard.” ⁠ ⁠ This is why we collect luggage for kids in foster care. ⁠ ⁠ Kids and youth should get to travel with dignity. A nice piece of new or gently used luggage helps them know that they matter! ⁠ ⁠ We’re excited about our Luggage Day in TR (Upstate SC). To get details, visit our IGTV interviews!

While attending an FGI gathering of foster care alumni, Jamie Brockman noticed Jasmine having an especially joyful reunion with a young man. When asked who he was, she said, “That’s my brother; I hadn’t seen him for years!” Three of her four older siblings had aged out of foster care with no family. Recognizing the importance of these relationships for their daughter, the Brockmans started having them over, getting to know them, seeing the struggles they faced.

“They were all floundering,” Brockman says. “You age out of foster care without life skills and a support system, of course you fail.”

Over the next few years, Andrea, 28, Sonya, 27, and Brandon, 25 — some with partners and children — moved into the Brockman home when they needed to. Eventually, the couple adopted all three, providing the secure family connections they craved.

“It only takes one caring adult to change the trajectory of someone’s future. We didn’t save any of them; all we did was love them. Every child needs someone who will love them, even when they screw up. Fostering is one of the hardest things we have ever done, but nothing we’ve ever done has been more fulfilling than seeing a life change,” Brockman says.

“Just one interaction has a ripple effect. If we hadn’t met Jasmine, she wouldn’t have graduated from high school, gone to college and met her fiancé. If we hadn’t met her siblings, Sonya’s son wouldn’t exist. Brandon would be homeless. He, his girlfriend and sons wouldn’t live here for her to attend college.”

Now 36, with eight children and four grandchildren, the Brockmans still foster children, some with severe medical or emotional issues.

“One question we’re often asked is, ‘Aren’t you worried about the impact on your “real” kids?’” Brockman says. “Of course we were, but this is by far the best thing we have ever done for them. They’ve learned empathy and compassion.”

The Community Foundation of Greenville is proud to support FGI as they provide support throughout the foster care journey. To learn more about becoming a foster parent, visit https://fgi4kids.org/care2foster/. To see other ways to improve the lives of children in foster care, visit fgi4kids.org. 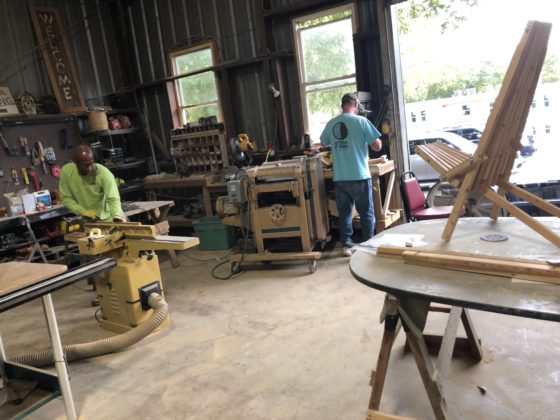