Oakblue Kitchen is an intriguing addition to the Main Street dining scene, a place that leans heavily on American and European traditions despite the proliferation of sushi bars and other international fare. Self-described as a restaurant of Southern staples, Korean barbecue and craft cocktails, Oakblue, in particular its Korean offerings, is particularly daring for our downtown culinary landscape.

To be sure, Korean flavors are not entirely exotic or unknown to Americans, or even Greenvillians. Los Angeles restaurateur Roy Choi made his mark with a gourmet Korean food truck in 2008, and that trend has found its way east – just look to Asheville’s El Kimchi food truck or the Korean barbecue tacos at either Local Taco location in Greenville. And to be sure, we have our own excellent, homegrown, mom-and-pop restaurants like Korean BBQ and Kimchee.

However, until Oakblue, Greenville hadn’t seen a restaurant that combines the easy accessibility of Main Street with a prominent feature of Korean flavors.

Located in the North Main space, Oakblue has an interior that appropriately reflects the hipness of its concept. It’s a clean, urban interior – grays, exposed brick and piney tabletops – and while dim, tables are appropriately spotlit in each booth.

I ordered the ssam plate, the hot fried chicken sandwich and the Korean barbecue plate. They are, essentially, a sampling of all the things on Oakblue’s menu that I’ve not seen elsewhere on Greenville’s Main Street. (You’ll also find pulled pork, brisket, a pimiento cheese plate and the ubiquitous chicken tenders on the menu.) 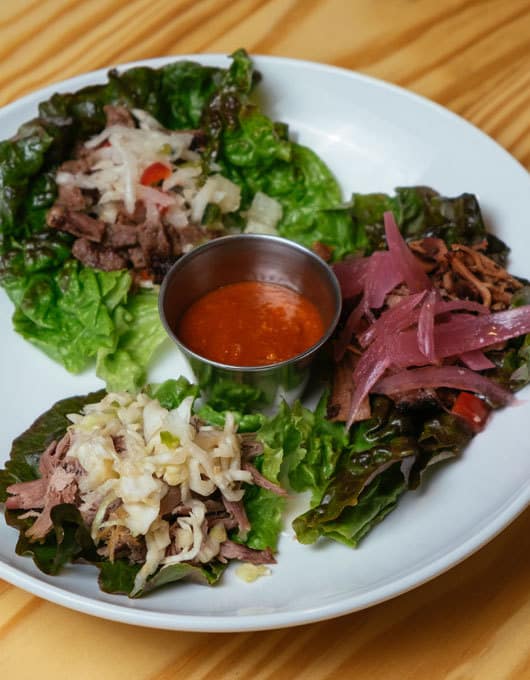 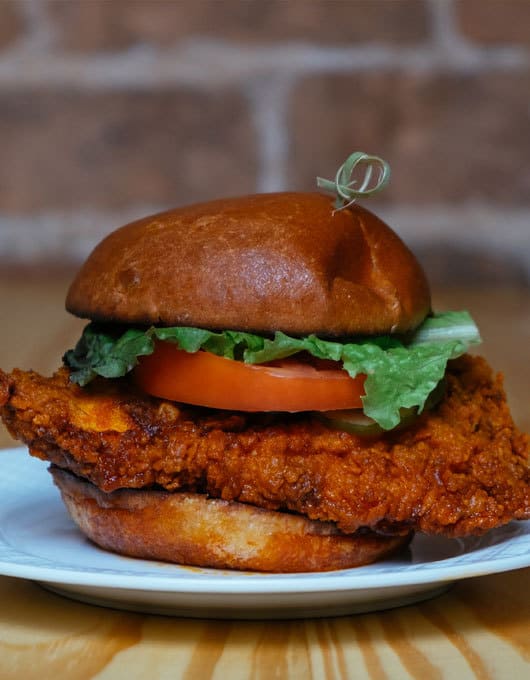 Ssam – the literal translation of which means “wrapped” – is basically a Korean lettuce wrap, and at Oakblue, the dish ends up being the most indicative of the restaurant’s potential. The plate comes with three variations of ssam: pulled pork and cabbage relish; chopped brisket and pickled onion slaw; and galbi (Korean short ribs) with daikon. A cup of ssamjang – a thick, spicy and garlicky sauce – comes on the side.

Each variation takes the same formula – protein and tangy, crunchy, pickled vegetables wrapped in a lettuce leaf – but there’s a uniquely Southern or Korean spin to each. The wraps offer a punchy mouthful of flavor, even before the addition of ssamjang, which adds a mild, earthy, lingering spicy dimension.

The fried chicken sandwich doesn’t have the same impact on me. It’s a matter of consistency. On one occasion, the chicken was a flat, characterless kind of spicy and a slow accumulation of heat that was unnoticeable until halfway through the sandwich when I realized sweat was beading on my forehead. However, when I tried the sandwich later, I got the bright, scorching, juicy Nashville-style hot chicken I’d been hoping for. It’s punishingly spicy and antithetically addictive. When it lives up to its namesake, this hot chicken sandwich qualifies as the best chicken sandwich I’ve had in recent memory – and I’ve eaten a lot of Chick-fil-A. 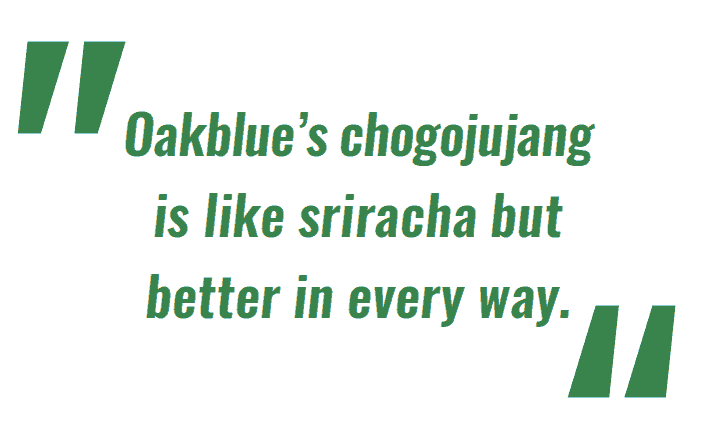 The Korean barbecue plate was an improvement. Galbi – Korean short ribs chopped laterally through the bone – is the centerpiece of this plate, although it also comes with rice, a cup of napa kimchi, some chogochujang sauce and a side. The ribs have a layer of char, which provides a nice bit of carbonized crunch that balances out the sweetness imparted by the galbi’s marinade. Again, the sauce is excellent: the chogojujang is thick and a little grainy, and has more of a chili note than the ssamjang. It’s also incredibly addictive. Oakblue’s chogojujang is like sriracha but better in every way.

All told, I wish Oakblue gave more attention to the Korean aspect of their concept. Yes, by even listing Korean food as part of their core identity, Oakblue is doing something different for Main Street. However, the menu still leans heavily towards the Southern staples aspect – there were only four Korean-influenced items on their full menu when I visited. And that’s a shame, because the ssam plate speaks to the creative potential of melding Southern and Korean, and the Korean condiments are a worthy highlight. Those elements deserve more time in the spotlight.