She lay in bed around 3 a.m., her whole body vibrating with anxiety. It had been two days since Gov. Henry McMaster ordered all dine-in restaurants to close their doors in an effort to stall the spread of the coronavirus.

Lauren Ortiz, who runs Luna Rosa Gelato Café & Restaurant in downtown Greenville with her family, now didn’t know how she was going to keep the business afloat.

The truth is, she still doesn’t know.

“I feel like we’re in a movie,” she said the next morning, seated at the bar inside Luna Rosa, a strong cup of coffee in hand. “I’m so heartbroken. At this point, we’re just hoping we can feed our immediate family.”

It’s a key distinction, the fact that Lauren Ortiz said “immediate family,” because she often talks about her family at Luna Rosa being more than just her husband, her parents and her two school-age children. Some of her employees have been at the restaurant for almost a decade, and within the span of just a few days, she had to lay off all 20 of them.

“If I were a bigwig, without question I’d pay my staff until we got through this,” Lauren Ortiz said. “But I’m not a bigwig. That’s the honest truth.”

Luna Rosa has been open in Greenville since 2007, the passion project of Lauren Ortiz and her husband, Jose Ortiz, along with her parents, Richard and Linda Schweitzer. The restaurant spent 10 years on West Washington Street before moving in 2019 to its current location on Main Street. That move required a significant investment, which is a concern now that two of Luna Rosa’s most lucrative months appear to be wiped away all but entirely.

“Everything we have is in here,” said Lauren Ortiz’s father, Richard Schweitzer, as he took a short break from preparing that day’s takeout orders.

For now, that’s all Luna Rosa’s owners can do. They hope customers will keep calling to place orders and keep picking up food from the curbside area they’ve set up outside, but business has nevertheless dried to a trickle.

“And I can’t even blame them,” Lauren Ortiz said. “How do you deal with that balance? The news is telling everyone to stay home, so how do I selfishly say, ‘Please come and support our business so we can stay open?’ I’m worried too. My daughter has ulcerative colitis, which means she gets an infusion to suppress her immune system, and I don’t know what happens if she gets sick. That scares the ever-living hell out of me. My parents are healthy, but they’re 68 and 70, and I just worry that something might – ”

“Hey, it’s OK. Stop yelling,” Richard Schweitzer said. He smiled at his daughter, then added, “Our family, we have a tendency to be very loud.”

Or maybe it was just because voices inside Luna Rosa carried more than ever this morning. After all, the restaurant was empty.

Luna Rosa is one restaurant, one family.

But there are more than 1 million restaurants across the country, employing about 15.6 million people. And 90% of these restaurants are small businesses with fewer than 50 employees, according to the National Restaurant Association.

For an industry that is already operating on margins as thin as 3%, according to the point of sale and restaurant analytics company Toast, the impact of widespread closures or limited service due to the coronavirus pandemic is especially brutal. Restaurants are expected to lose upward of $225 billion in sales, or about a quarter of total sales for the year, according to the restaurant trade group.

While many restaurants — Luna Rosa included — are still operating with takeout and delivery services, that’s not enough to get by. Deliveries only account for about 3% of sales across the restaurant industry, according to the data analytics firm NPD Group. Restaurants with bigger pockets or multiple locations might be able to weather the storm, but countless small restaurants, which make up the vast majority of the industry, will be forced to close their doors for good. 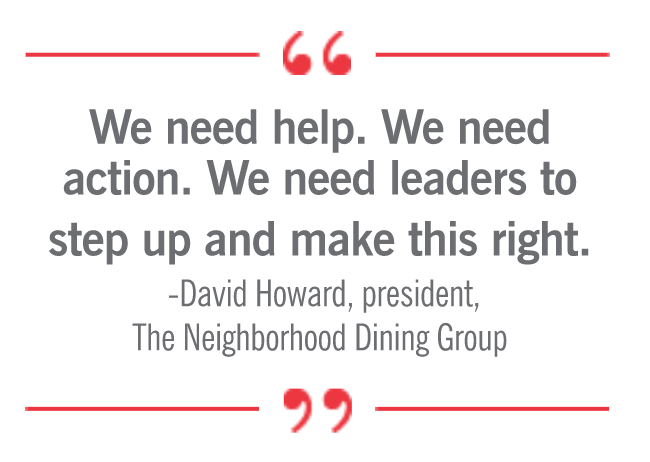 “It’s devastating,” said David Howard, president of The Neighborhood Dining Group, which operates restaurants across the South, including Husk in Greenville. Howard shut down the group’s restaurants for the foreseeable future, offering employees pay and health care until April, but he said even that amount of staff assistance is impossible for most restaurants.

Howard predicts small, independent restaurants like Luna Rosa will be hit the hardest. Despite four decades in the restaurant industry himself, the unprecedented nature of the past few weeks has left Howard at a complete loss for any words of advice to give.

“What could I even say to them?” he said. “It sounds hokey, but if I were standing there looking at them, I don’t think I would say anything to them. I would just give them a hug — but no, I can’t even do that anymore. We need help. We need action. We need leaders to step up and make this right.”

Inside Luna Rosa, the family was nearly ready to open for takeout orders and delivery, even if they weren’t holding out much hope for an especially busy day.

Jose Ortiz was preparing the front for curbside orders. Lauren Ortiz was working back in the kitchen with her mother, Linda Schweitzer, while her father, Richard Schweitzer, sat at the bar tapping through forms on the computer. He had worked from 3 p.m. until 11 p.m. the night before filling out a Small Business Administration disaster relief loan form, at one point breaking down in tears as his web browser’s window closed unexpectedly. The maze-like complexities of the SBA loan form only added to his uncertainty.

His family was prayed-out and yet still folding their hands, still nodding their heads. He already knows they won’t be able to pay the rent. The family is hoping something happens, some kind of relief is offered, even if they don’t know what that something is.

No one else, not the government or industry peers, seems to know what it is either.

Meanwhile, Lauren and Jose Ortiz’s two children were here as well. Now that schools are closed and the whole family was running the restaurant on their own without staff, this was the only place for them. Luca, age 7, played games on his iPad at the empty bar, while 12-year-old Mia walked in with her backpack, ready to do some schoolwork in the dining area, where customers once sipped wine and laughed over homemade-style baked ziti and paninis.

Mia is old enough to know something is wrong, but her mother tells her not to worry. A few days earlier, Mia had walked in and asked her mom if they would have to close the restaurant forever.

Now, thinking on that, Lauren Ortiz could only sip her coffee and shake her head.

“She said to me, ‘Mom, this is our legacy, though,’” Lauren Ortiz said. “Because Mia was just 4 months old when we opened the place. This has been her whole existence. I told her, ‘It’s not for you to worry about. This is only a building.’ I don’t need her losing sleep over this. But that’s what happens when you have a close family. I can only shield her from so much.”

For now, the family will take it day by day.

Lauren’s mother, coming out of the kitchen, stood by the bar with her gloved hands hanging at her sides.

“We’re going to keep going,” Linda Schweitzer said. “And to everybody else out there, that’s the only thing I can say to you: Just keep going.”

At that very moment, the quiet restaurant was interrupted by a sudden noise, which echoed over the obsessively sanitized surfaces of the empty tables and chairs. For the family, it was the best sound in the world.

The phone was ringing.

With a gloved hand, Jose was quick to answer it, saying the words he and his family hope more than anything they’ll be able to keep saying: “Luna Rosa Gelato Café & Restaurant. How can we help you?”

If you want to help out Luna Rosa, the family has just created a GoFundMe page, with all donations going to their laid-off employees 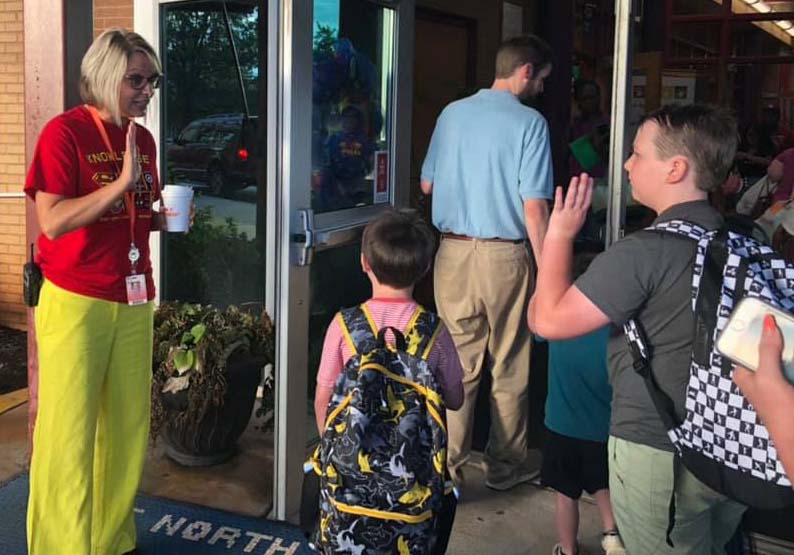