In an area where the Scots have played an important historical role, it comes as no surprise that Greenville hosts an annual celebration dedicated to the Upstate’s Celtic heritage. It is also “one of the only festivals with it’s own official bottled beer,” said Jay Spivey, marketing director for the Greenville Scottish Games.

As the sole beer provider at the games since they began in 2005, Thomas Creek Brewery is creating a special brew for the second year specifically for the Scottish celebration over the Memorial Day weekend.

“The Gallabrae Scottish Ale is based off true Scottish ale,” said Tom Davis, founder and owner of Thomas Creek Brewery. During a 14-day process, the ale is smoked with peat from a bog using a “peated malt” recipe, he said. The taste of the Scottish Ale can be described as a sweet, amber caramel flavor. “It smells like and tastes like a backyard BBQ got in it,” said Tim Smith, marketing analyst for the brewery. 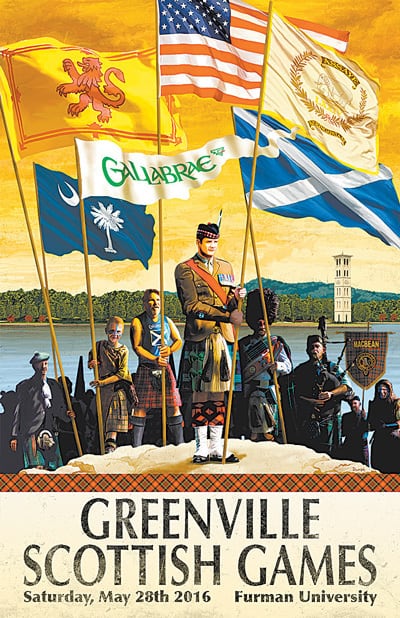 Gallabrae, a two-day Scottish celebration presented by the Greenville Scottish Games, will kick off with a parade on Friday, May 27, on Main Street in downtown Greenville and continue with the 11th annual games on Saturday, May 28, at Furman University.

The Great Scot! Parade will march up Main Street from Broad Street to East North Street in downtown led by the Royal Highland Fusiliers, sponsored each year by the St. Andrews Society of Upper South Carolina. They serve as the honor guard of the games and will also open and preside over the military tribute ceremony at the games.

The awards ceremony begins at 5 p.m. and for the first time will be immediately followed with “the greatest Scottish happy hour in the world” that will include a Celtic concert, pipe bands and beer starting at 5:30 p.m., according to the Gallabrae website.

Over the years, the games have been visited by numerous Scottish dignitaries including Britain’s Prince Edward, the Earl of Caithness; the Duke of Hamilton and members of the Queen’s Privy Council. Several U.S. senators, congressmen, mayors and the governor have also attended, Spivey said. The Honored Chief of the Greenville Scottish Games this year is Jamie Macnab of Macnab, 24th Chief of Clan Macnab.

For more information and to purchase tickets, visit gallabrae.com.