A dust of red clay shoots into the air as the runner slides into third. Safe! The home team dugout at Timmons Park comes alive, as cheers ripple across the 26-acre haven nestled between Wade Hampton Avenue and East North Street.

The donation of the highly-used public green space is just one of many ways the Timmons family has left its mark upon the community. The Greenville Chamber of Commerce, Furman University, Christ Church Episcopal School, the Metropolitan Arts Council, the Peace Center and dozens of other nonprofit groups bear the fingerprints of this five-generation, Greenville-based family.

Architect Bill Pelham scans the Timmons family directory. The burgeoning document lists just over 100, including spouses and fifth-generation newborns. Pelham is third-generation through his mother, Jean Timmons Pelham. Everyone can trace their lineage back to William R. Timmons Sr. and his wife, Eva.

“I never knew him,” Pelham reveals of his grandfather. “I wish I had, but he died young. I’m told he was a magnificent tenor, a leader and an entrepreneur.”

To call William Richardson Timmons a leader is like saying Greenville has a small stream trickling through downtown. William Timmons graduated from Furman University to enter World War I.  Upon his return, he doubled the size of the Upstate’s oldest business organization: the Greenville Chamber of Commerce.  He also utilized his entrepreneurial spirit to build Central Realty Corporation and Canal Insurance. Those two companies grew into bigger businesses, side businesses and a holding company that continue to operate today.

“Most family businesses don’t survive to the third generation,” reveals Pelham. “There’s a definite pride in ownership, but we’ve been lucky, and my uncles were very smart in what they did, and current leadership has expanded it as well.” 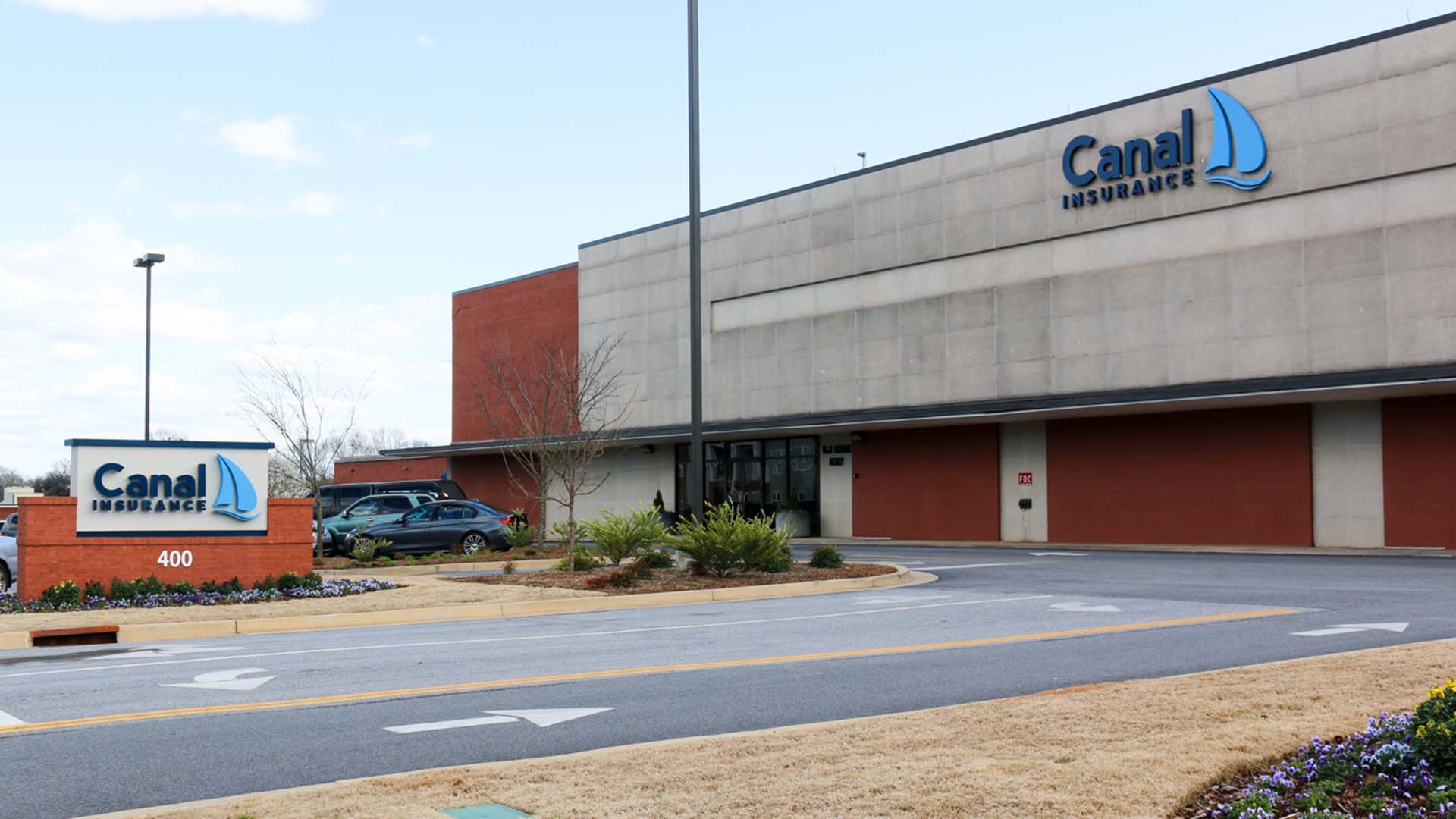 Pelham’s cousin Chuck Timmons was the last family member to serve as president and CEO of Canal Insurance, before the company and board looked to outside executives and directors as a “best practices” approach. “Our parents worked long hours and it grew much bigger, so we were driven to do the same,” he explains. “We love to work hard and grow our family business, and we love to give back to the community.”

Another cousin in the ranks: Sydney Timmons Taylor. “As long as I worked really, really hard, I figured I might as well be doing it for the family business,” she shares. “My Uncle Charlie once said he tried to make other employees forget he’s a Timmons. That’s the way it was: old school.”

After decades at Canal, both Sydney Timmons Taylor and Chuck Timmons retired, yet today remain engaged by serving on family-company boards. Currently, Canal employs 233, while providing insurance to trucking operations in 48 states.

Sydney Timmons Taylor’s brother, Rick Timmons, currently serves as senior vice president of investments and board member at Canal, and financial vice president and board member of Central Realty Holdings. Over the years, the real estate arm of the family business has developed Greenville’s first mall (Wade Hampton Mall), which is now owned by Bob Jones University, restaurants and retail at I-85 and Pelham Road, and the mixed-use NorthPointe, which stands in various stages of occupancy and completion at the corner of Wade Hampton Boulevard and Stone Avenue.

Just as the businesses have grown, so has the family. The 14 cousins who grew up spending holidays together at their Grandmother Eva’s home on Chick Springs Road gave birth to a fourth generation of 35 descendants, who live as far away as Salt Lake City, Utah. In 2006, the Timmons family started exploring ways to keep all relatives updated on business affairs and philanthropic matters while strengthening family connections. The third generation eventually formed the EVA Assembly, which hosts an all-family gathering twice a year.

“It’s a great deal of fun, we get together and eat, drink and visit,” says Pelham. “Outside speakers are often on the program, and as the fourth generation expands, we’re all evolving within our own communities. We all learn from each other and support each other.”

Sydney Timmons Taylor adds, “Understanding the businesses and how they work just increases the sense of stewardship of the companies. It’s been really good and something my generation didn’t know as children. It’s going to be exciting, whatever the next generation comes up with when they are in charge.”

That transition is starting to happen, with fourth-generation member Brittany Timmons serving as an EVA leader in recent years.

Although on-roads exist to work at the family companies, the fourth generation is paving different career paths in education, corporate America, real estate and even politics for U.S. Rep. William R. Timmons IV. They work individually and collectively to support groups, projects and improvements across the region. Yet young and old alike prefer to avoid using the word “legacy.”

“We’re a humble family,” admits Chuck Timmons. “I don’t know if that came from our parents or our grandfather, but most of us are that way. We are warm and sincere and caring of Greenville.”

Pelham echoes the sentiment, adding, “We are a family that is interested in giving back to the community in terms of time, talent and treasure.” Treasure that makes Greenville shine that much brighter. 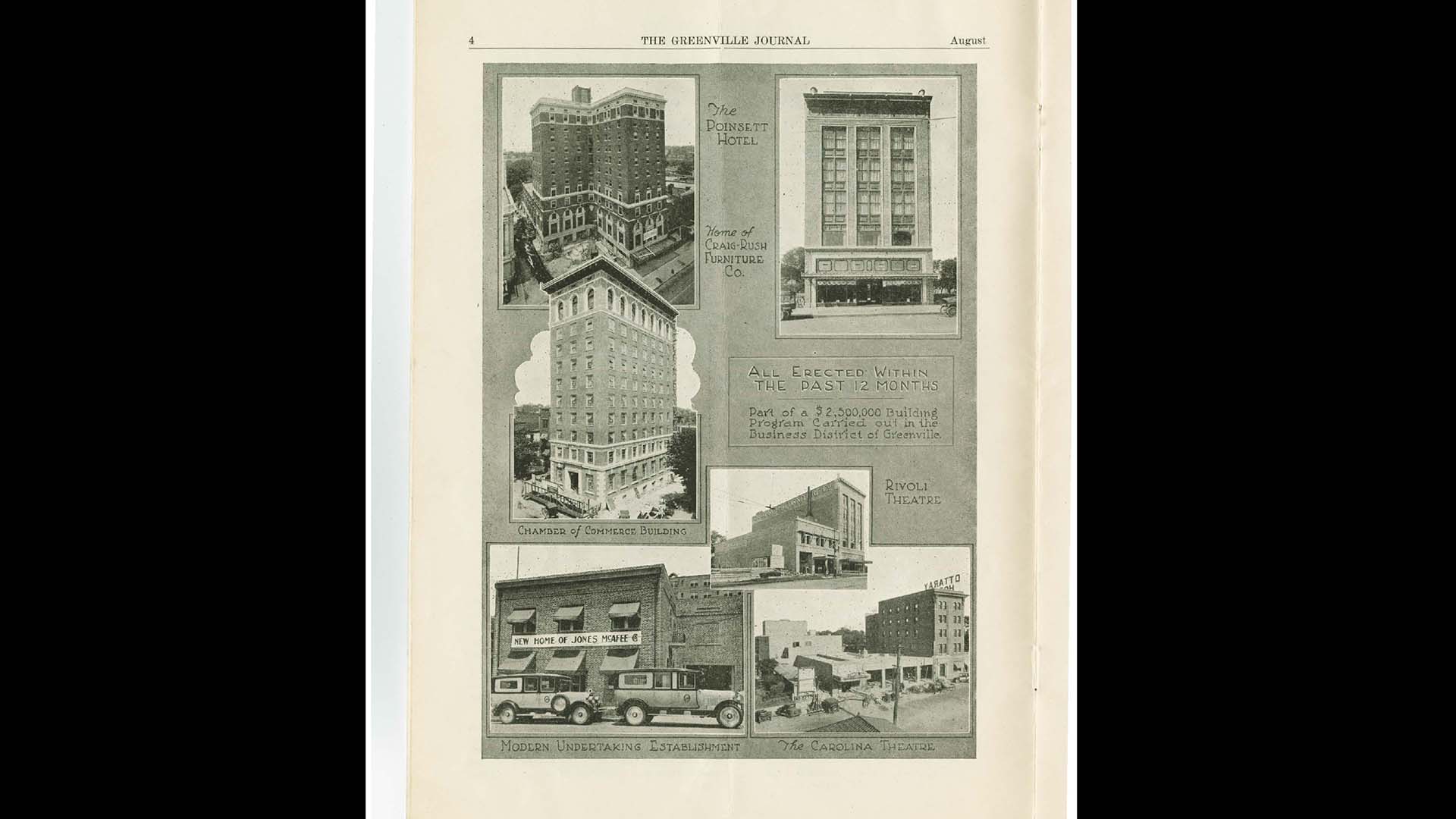 The Roaring ’20s had just begun when William R. Timmons Sr. started serving as secretary of Greenville’s Chamber of Commerce. The 31-year-old business group was holding steady at 1,000 members when leaders looked for ways to expand industry in the region after World War I. Across Timmons’ tenure, the Chamber doubled in size to 2,009, becoming one of the largest chapters in the South. The committed figurehead’s recruitment efforts included a new monthly magazine, barnstorming train tours and even musical compositions singing the praises of Greenville.

In 1921, Timmons launched “Greenville: A Civic and Commercial Journal,” touting the region’s commercial opportunities through letters, articles and advertising. In 1924, he rallied more than 100 members to embark on goodwill tours from Cuba to Canada, selling the area’s attributes. The secretary even used his musical skills with the Chamber of Commerce Quartet to perform “We are From Greenville” on Charlotte radio station WBT. 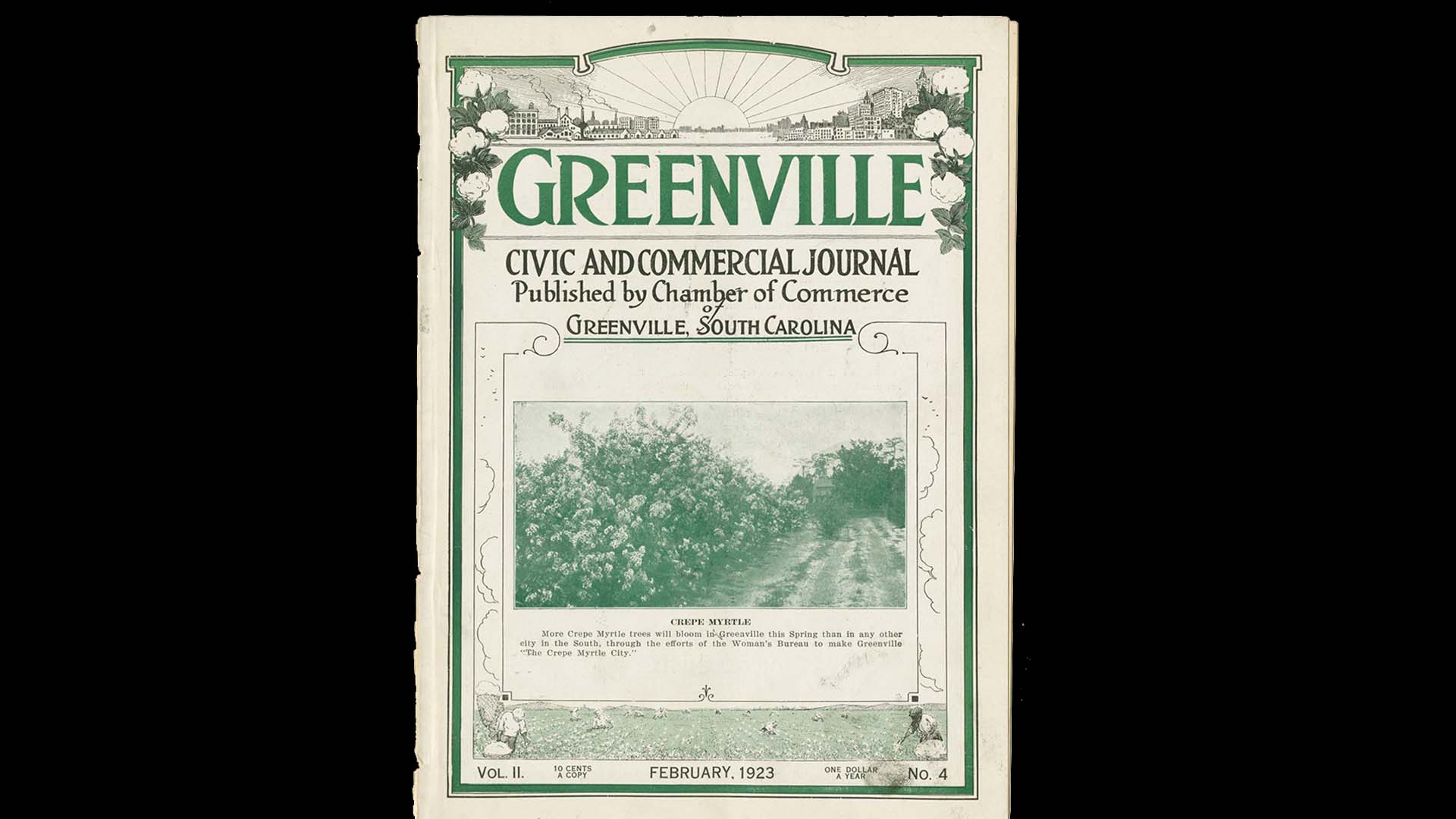 Timmons was also charged with promoting construction of a 10-story “skyscraper” on Main and Court streets. The Liberty Life Building, as it’s now called, came to symbolize “New Greenville.” When the $250,000 structure opened, the Chamber of Commerce occupied the first floor, welcoming all who visited downtown. Upon his untimely death in an auto accident on a rain-drenched road, colleagues described Timmons as “the best secretary the Greenville Chamber of Commerce ever had … and one of the outstanding secretaries in the Southeast.”

No one can question the Timmons family’s ability to heed Furman University’s alma mater, singing, “Our love, our lives we give to thee.” Since William R. Timmons graduated in 1912, the family has supported the private liberal-arts institution from academics to the end zone.

In “The Bell Tower and Beyond: Reflections on Learning and Living,” former Furman president David Shi writes, “The entire Timmons family has been a pillar of support to the university for many years.” Each generation includes members who have attended Furman, while others reside on the rolls of the Advisory Council, Athletic Hall of Fame and Benefactors Circle. Furman’s Board of Trustees has included a Timmons for many years. Bill Timmons completed five terms as a trustee, and his son, Rick Timmons, currently sits on the board.

In 1988, the family donated $4 million as the lead gift for Timmons Arena. The family is also credited with sponsoring Furman Pro-Am events, endowing a music scholarship and funding digital scoreboards. 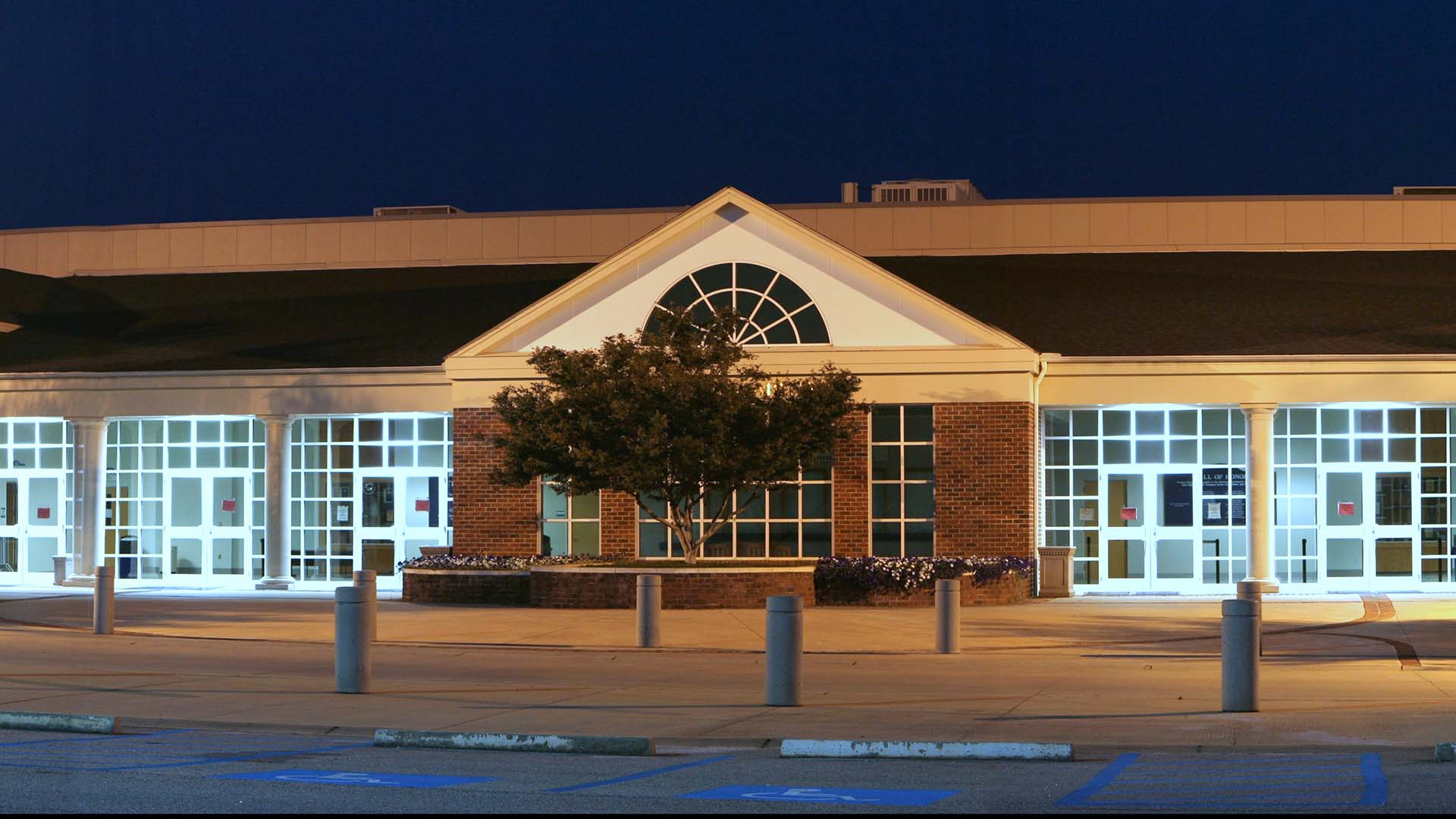 The family has donated millions of dollars to wide-ranging projects, groups and institutions over the years. Rick Timmons credits his ancestors, saying, “Probably the greatest legacy of the second generation was their estate plan that passed a large portion of their accumulated wealth to charitable foundations that will benefit the communities where their descendants live for many years to come.”

Children’s Museum of the Upstate

Junior Achievement of the Upstate

SC Governor’s School for the Arts

1912: William R. Timmons Sr. graduates from Furman University and joins the U.S. Army during WWI, rising to the rank of captain.

1920: Timmons marries Eva McDonald and serves as secretary of Greenville’s Chamber of Commerce.

1948: William R. Timmons Sr. dies in an auto accident, leading his sons, Bill and Charlie Timmons, to join Canal to work alongside a veteran management team.

1992: Canal Insurances moves into the old Sears building on Stone Avenue, where it remains today.

2000: Canal goes on a run, tripling its business across five years.

2009: Chuck Timmons retires after 33 years with the company.