The Greenville skyline fills the high-arch windows of Hayne Hipp’s office in the old Liberty Life building at the corner of Main and Court streets. As he looks down from the 10th floor, he reminisces about his first job with the company his grandfather founded.

“I was 12 years old,” he recalls. “I worked in the print shop, there where the Peace Center now sits. I would print stuff for the branch offices, and then come here and fill candy machines on each floor, and hitch a ride home with Dad.”

That young boy grew up to run the Liberty Corp., a publicly held holding company that included a multimillion-dollar insurance business, broadcast empire and support services. By 2006, all arms of the corporation were gone – successfully separated and sold. Yet today, “Liberty” lives on for thousands to enjoy at the Liberty Bridge in Falls Park, the Liberty Clock on Main Street and the multi-building complex on Wade Hampton Boulevard that now houses NEXT High School and Concentrix.

Those are just fingerprints of the callus-forming work the Hipp family has been engaged in over the years to create a vibrant and diverse community. The 80-year-old patriarch paints the many accomplishments of four generations with a broad brushstroke, saying, “Whether you’re trying to build a neighborhood park, or change the whole state, the important thing is to have a positive impact on making South Carolinians better, South Carolinians happier, more productive and more skilled, so they are in a better place. That’s the joy in doing that.”

It’s hard to believe that two-penny insurance policies provided the springboard for that joy.

Hayne Hipp’s grandfather, W. Frank Hipp, grew up in Newberry, South Carolina. After a two-year bout with tuberculosis, he moved his young family to Greenville and organized Liberty Life Insurance in 1919.  The company specialized in selling 2-cent life insurance policies to mill workers. Hipp’s creation survived the stock market crash of 1929 and the Great Depression, ranking ninth in the nation in policies written. W. Frank Hipp gobbled up regional insurance companies, bought his first radio station (WIS in Columbia), and moved into new headquarters on Main Street, across from the Poinsett Hotel.

The founder died in 1943, leaving his three sons to run the growing conglomerate. During Liberty Life’s Golden Anniversary in 1955, Hayne Hipp’s father, Francis M. Hipp, set the cornerstone for a $2.5 million facility at Wade Hampton Boulevard and Pleasantburg Drive, which became the largest single-office building in the state. By 1969, the brothers created The Liberty Corp., which was one of the first four South Carolina-based companies listed on the New York Stock Exchange. That’s the same year Hayne Hipp joined the company as an executive.

“The myth is that Liberty Corporation was a family-owned, family-dominated company,” Hipp clarifies. “Once we sold shares, our ownership went from 90% to 40%. The Hipp family did not control Liberty Corporation except through their ability to run a very efficient, profitable business.”

The Hipp family worked the “we” way beyond business, starting with Francis M. Hipp.  In 1959, Gov. Ernest Hollings appointed Hayne Hipp’s father to chair the state Development Board, where he set the stage for industrial growth across the region. “They all actively participated in the community,” Hayne Hipp recollects of his elders. “You can look at Aunt Dot Gunter with the [Peace Center Gunter] theater down here, or Uncle Herman and Hipp Hall at Furman, or Uncle Calhoun and the Hipp scholarships at Davidson.”

Hayne Hipp also worked to support and strengthen many groups, agencies and nonprofits over the years, including helping start the Greenville Urban League (now the Urban League of the Upstate) and Alliance for Quality Education. Perhaps his farthest-reaching 501(c)(3) effort is the Liberty Fellowship, which he founded with his wife, Anna Kate, and others in 2003. Through intense seminars, the group brings together a cross-section of state leaders from every niche to open lines of communication and trust. Each fellow is then charged to use these new relationships to break barriers, tackle issues and solve problems. “It’s critical,” says Hayne Hipp. “It’s an investment directly into the bloodstream of South Carolina leaders. We’ve got to break down the silos of arrogance and learn to collaborate. Liberty Fellows can make the difference, to show where we’re going and how to get there.”

One Liberty Fellow in particular is showing the way, while following in her father’s footsteps.

Mary Hipp checks her phone with each ping and ding. She’s trying to nail down a lease for new office space for Feed & Seed, the nonprofit she helped found in 2016.

“Our mission is to make fresh food affordable to all of South Carolina,” Hayne Hipp’s oldest child explains. “We have the local farmers and we have the end-users, but the structure to connect the two is either broken or nonexistent.”

Food has been a passion of Mary Hipp’s since her days at Washington and Lee University when she cooked for friends. Culinary arts called her to jobs from coast to coast. A pit stop home in 2004 turned into a permanent parking spot. “I had no intention of staying,” she admits. “I still had the Greenville I left decades ago in my head, and no appreciation for the Greenville it had become. I got to meet a new Greenville.”

The chef stumbled into service and mimicked what her parents modeled.  First, she chaired Friends of the Greenville Zoo, then served on boards from the Humane Society and the Greenville Chamber of Commerce to the Peace Center and Project Host. She’s a founding board member of Greenville Women Giving (which has granted $6 million locally) and enhances the downtown vibe through posts with the city’s Accommodations Tax Advisory Committee and Metropolitan Arts Council.

“Mary led the organization to its first year of surpassing $1 million in income,” reveals MAC Executive Director Alan Ethridge. “Her experience in fundraising, nonprofit policy and marketing were true assets at a pivotal period in the organization’s history.”

Mary Hipp simply sees her work as continuing the family legacy. “There’s never been a conversation from Mom and Dad, but I watched Liberty Insurance sponsor things, and Mom and Dad get involved with the community,” she shares. “I am not Liberty Corporation. But if I have the time, means or treasure, I do feel a responsibility to engage.”

Her father hopes future generations will feel the same. “I consider myself very lucky,” Hayne Hipp reflects. “We were lucky to be here in Greenville, in South Carolina at a time when this state was moving forward aggressively and we were able to build our business. In any community, you will always find individuals and families who are inclined to give. They have been successful, or very lucky. We have the opportunity to move things forward. Let’s continue to find common ground and collaborate.” 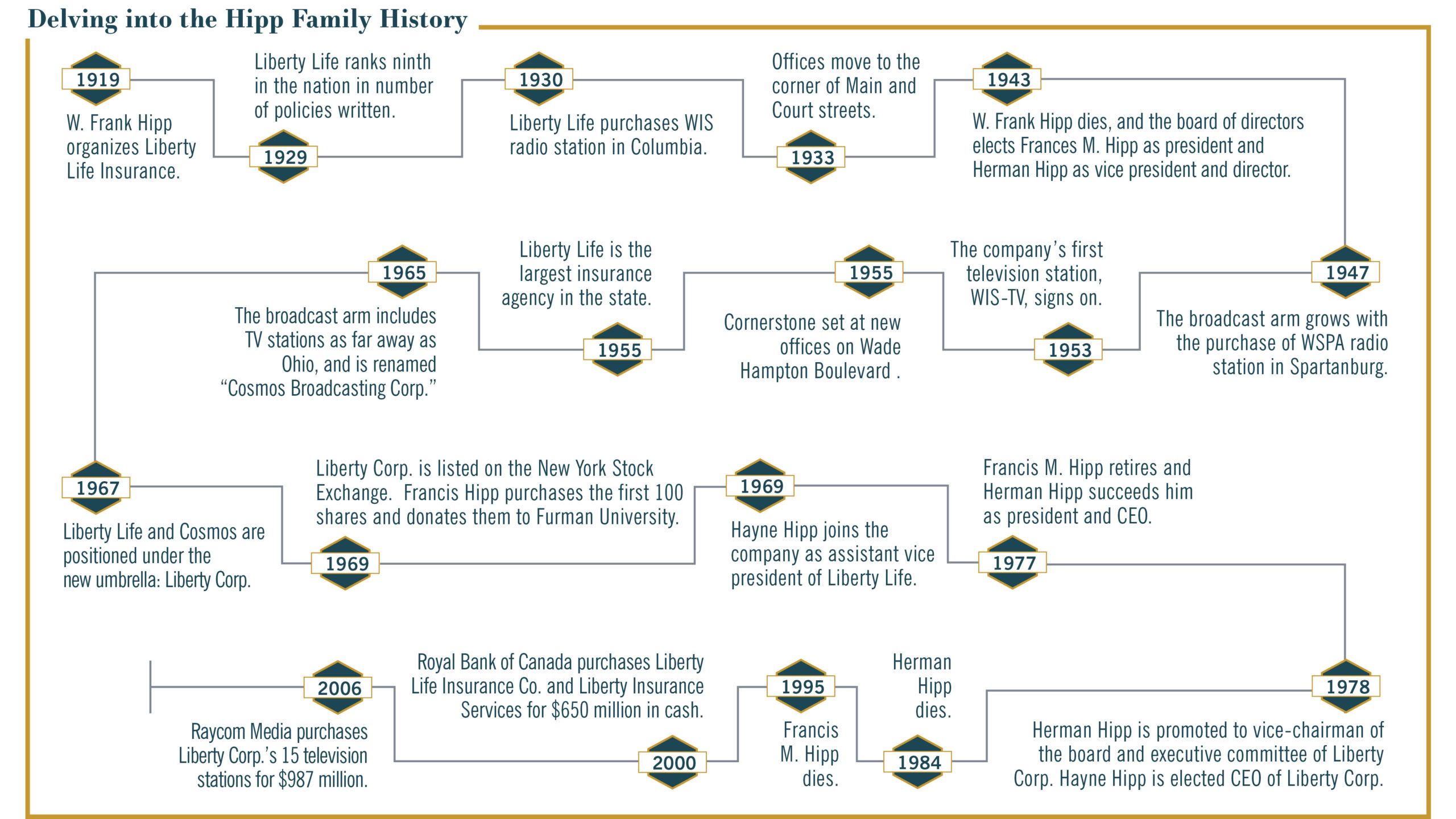 The Beaux Arts style building was built in 1924-25, when Court Square was renovated. As one of the first skyscrapers on the downtown horizon, it symbolized a “new Greenville.” The chamber of commerce lost ownership of the building during the Depression, and it became the home office of Liberty Life Insurance. The Liberty Corp. eventually sold the building. Yet in recent years, when Liberty Fellowship leased office space on-site, the new owner told Hayne Hipp he had the original Liberty Life elevator doors in storage. The two pulled them out and restored them, allowing Lady Liberty to greet all who enter.

Many call the towering pedestrian bridge overlooking Reedy River Falls the “crown jewel” of downtown Greenville. One of the community leaders who helped set the glistening gem in place: Anna Kate Hipp. Her efforts started in the 1960s, when the Carolina Foothills Garden Club reclaimed 26 acres for the park. They toiled across four decades to clean the river, build the park and restore the historic Falls Cottage. Once the four-lane Camperdown Bridge fell to reveal the falls in 2002, a landscape architect designed the world-class public garden, while Hipp and Pedrick Lowrey chaired raising more than $4 million to establish an endowment fund to maintain the park. “We wanted to create this fund to protect the park forever,” says Hipp. “It was an easy sell and the most fun I’ve ever had raising money. People were excited to see this part of town come to life.” The bridge’s name honors Liberty Corp. founder W. Frank Hipp and his children, Francis M., Herman, Calhoun, and Dorothy Hipp Gunter, for their commitment and contribution to the Greenville community.  Liberty Bridge has become a symbol of Greenville around the globe. 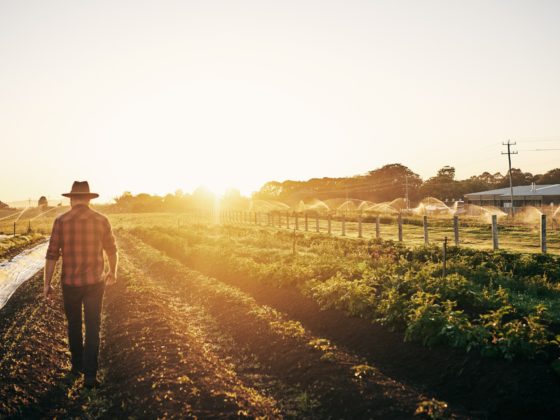