With folks using cellphone cameras to document every moment of every day, it’s hard to imagine a time when only major events were captured on film.  Photographers would stand still and steady, set an f-stop, and gently squeeze their finger. Only later, in a darkroom with a red light, would the snapshot artists discover if they’d adequately seized the moment for eternity.

Luckily for Greenville, Joe Jordan rarely missed a shot. “He loved a Rolleiflex camera,” recalls his son, Doug Jordan. “He absolutely loved those cameras because of their flexibility. He once said, ‘If I can’t use a Rolleiflex anymore, I’ll quit.’”

With that small, black German camera in hand, Joe Jordan worked the front lines of history as a police officer and politician, deputy coroner and journalist. He eventually opened his own photography business, where one of his favorite activities was hiring pilots to take aerials over the budding skyline.

“The camera opened doors for him,” shares Doug Jordan, who followed in his father’s footsteps at the studio. “He could go into different environments that most people couldn’t see.”

He shot it all: starlets and presidents, parades and progress, the KKK and friends of MLK. Unbeknownst to him at the time, he was preserving pieces of Greenville’s past — pieces that otherwise are quickly disappearing from people’s minds and Main Street.

When Joe Jordan died in 2009, he left more than 380,000 images behind.  His family has donated all the negatives, slides and prints to the Greenville Historical Society.

Local historian and documentary film producer Don Koonce has been scanning the images to upload to the Historical Society’s website by year’s end. “What Doug and his family did is so important,” explains Koonce, who serves on the board of the Historical Society. “These have such historical value. Joe started taking photos in 1953 and didn’t stop until 1998. When coupled with our other collections, we’ll have everything that happened in Greenville from the 1800s to the 2000s. This is essential to anyone doing research, or wanting to learn more about our area.”

It was important to the Jordan family to make the collection accessible to the public. “They mean basically everything to me,” admits Doug Jordan. “My father documented one of the biggest growth spurts of Greenville, and now everyone can enjoy that work. I think he’d be really, really proud. I really do.” 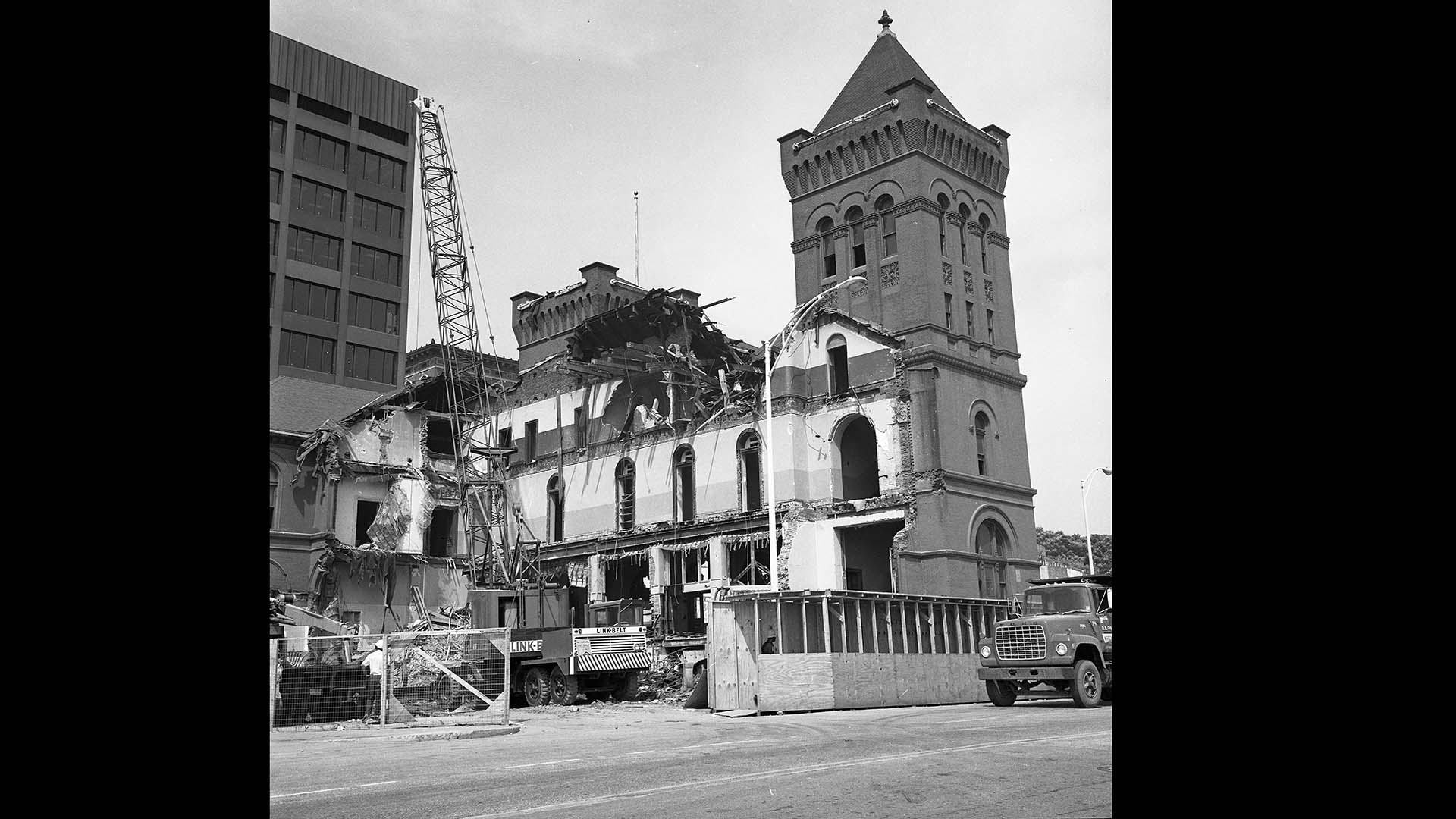 Old City Hall 1970/Demolition 1973:  This grand Romanesque Revival-style City Hall once stood on the corner of Main and Broad streets, where Fidelity Investments and the seasonal downtown ice rink now operate. Built in 1892, it was first used as a U.S. Post Office, before politicians and administrators moved in to run the town. The building was torn down in 1973, with Greenville’s new City Hall already casting a shadow upon the streetscape.

Richard Nixon Visits Main Street: Many presidential hopefuls have made campaign pit stops in Greenville, including Richard M. Nixon. In 1968, the candidate visited Main Street, meeting crowds near the South Carolina National Bank Building. When built in 1923, the 17-story structure was the tallest in both North and South Carolina. Woodside Securities owned the structure at Main and Washington, but lost it during the Depression. The building was demolished in 1974, and today Wells Fargo stands in its place. 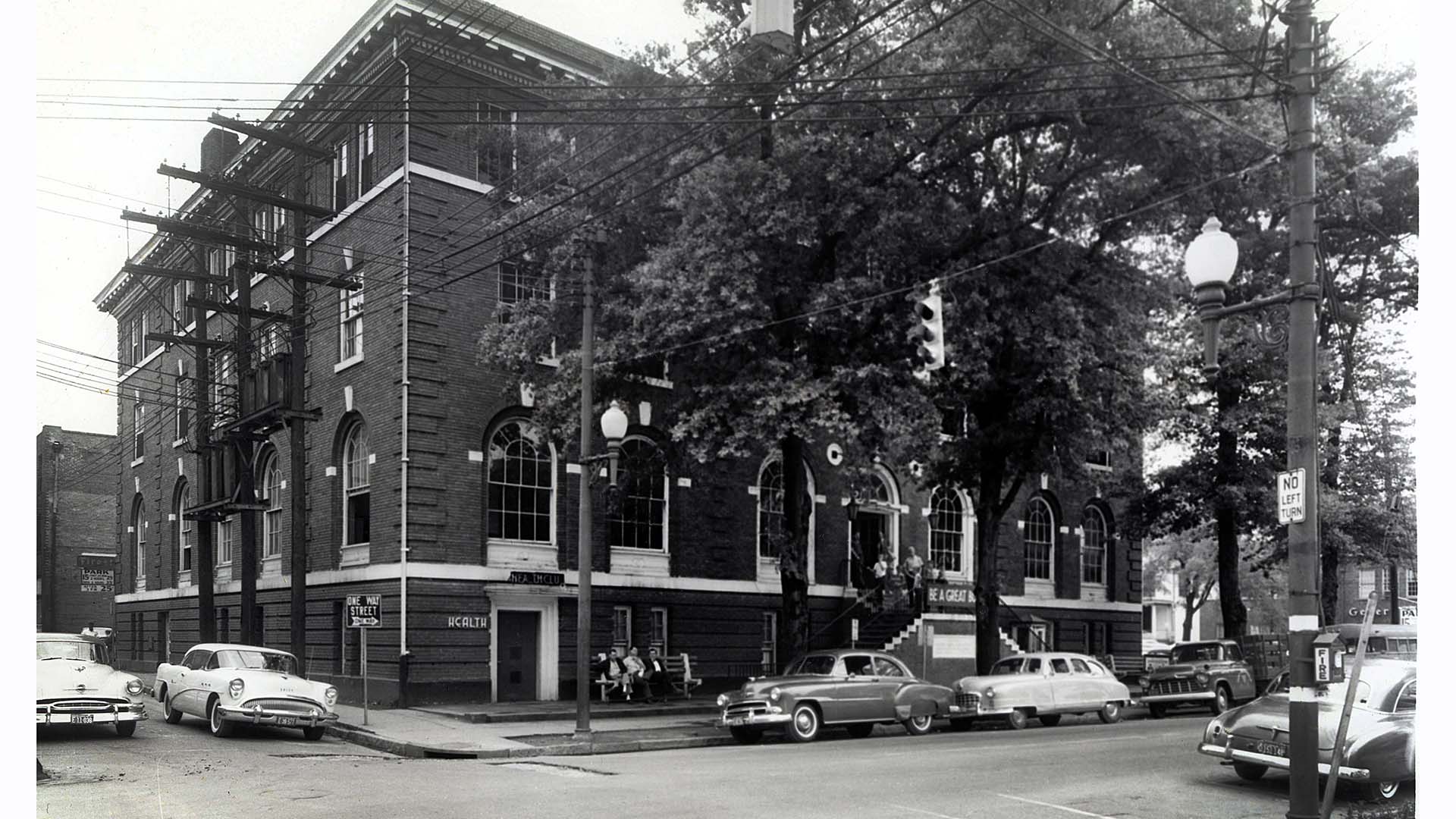 YMCA/1958 & 1960: Greenville’s first YMCA operated out of the 1822 courthouse with a gym and rec space. In 1912, the Y moved into its own building, this classic structure on the Northeast corner of East Coffee and Brown Streets. The original building was vacated and torn down in 1958, as YMCA operations relocated to the new facility on Cleveland Street.

Downtown Airport 1953 & African American Protest 1960: Now known as the Greenville Downtown Airport, the Greenville Municipal Airport opened in 1928. By the early ’30s, Amelia Earhart and Eastern Airlines were using its runways. In 1960, African American leaders marched from downtown to the airport to protest segregation. The airport had denied visiting baseball star Jackie Robinson a seat in the lobby, making him wait outside in the elements. 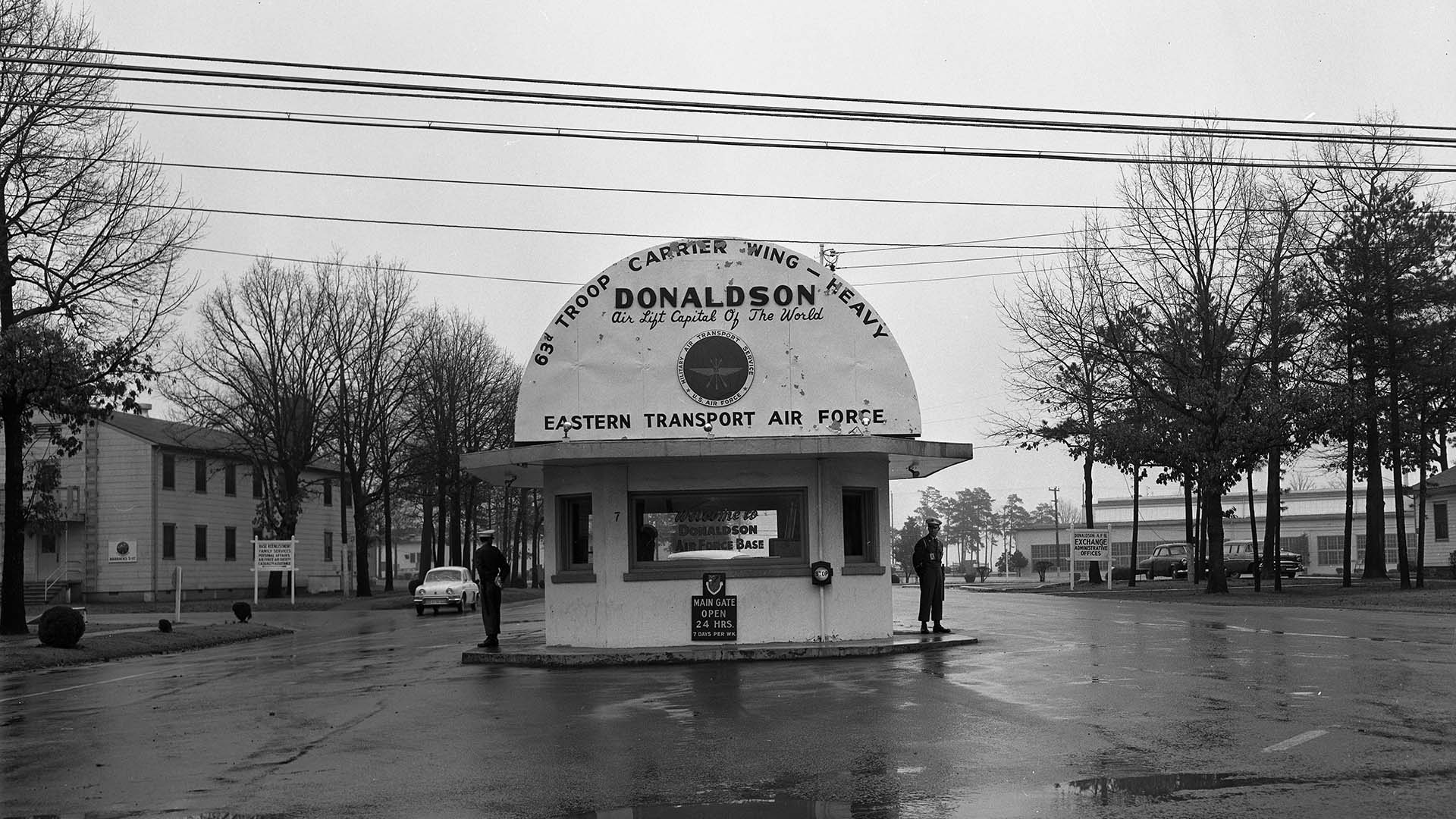 Donaldson Center Front Gate/1961: World War II birthed the Greenville Army Air Base, which was later named for World War I local flying ace Captain John O. Donaldson. In the years to come, the military dubbed Donaldson Air Force Base the “Airlift Capital of the World,” as its C-124s moved soldiers, sailors and flyers around the globe. The Air Force closed the base in 1962 with the city and county taking it over and renaming it. Today the 2,600-acre commerce park and airfield operate as the South Carolina Technology and Aviation Center (SCTAC), home to 118 companies supporting 8,500 jobs. 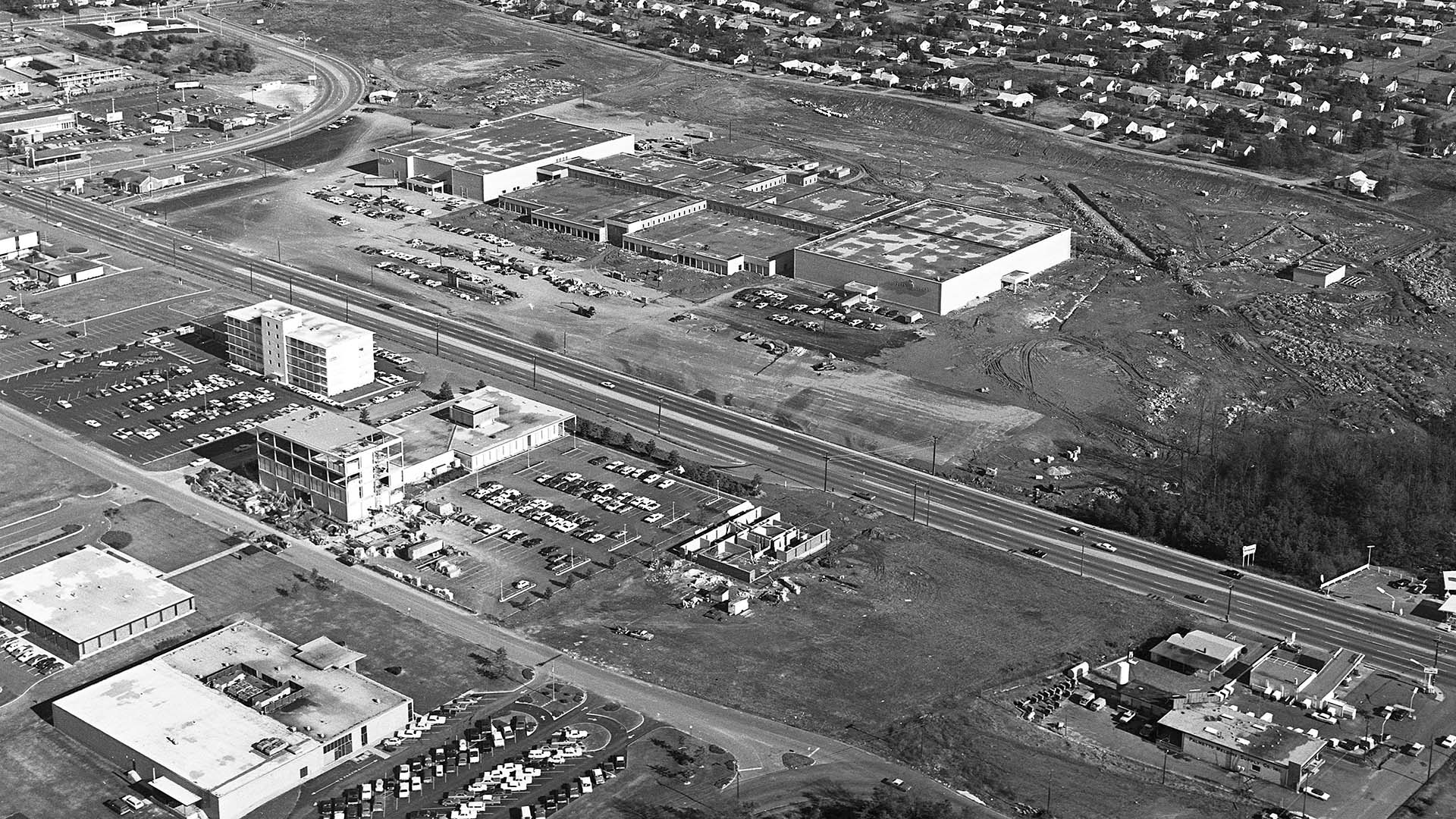 McAlister Square: After World War II, shopping centers started popping up far from Main Street, closer to suburban development. In 1968, a $6.5 million dollar shopping mall opened on Pleasantburg Drive. Anchored by Ivey’s (which became Dillard’s) and Meyers-Arnold (which became Upton’s), McAlister Square was the largest mall in South Carolina. By the turn of the millennium, all anchor stores had left. Today the space is owned by Greenville Tech and houses the University Center of Greenville. 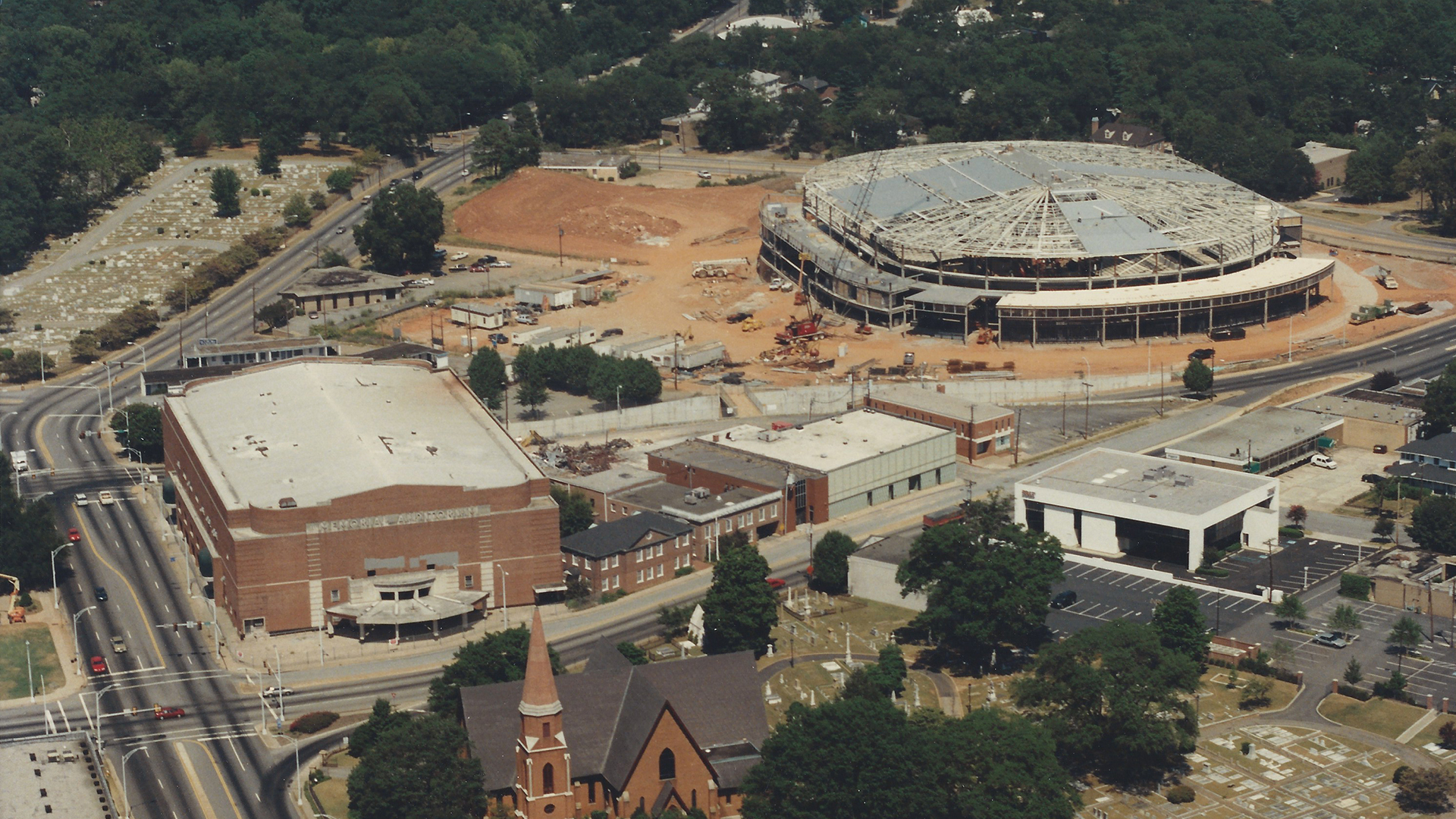 Memorial Auditorium & the former BI-LO Center: The past and present of entertainment sat side by side for a few short years. Greenville Memorial Auditorium was built in 1958 and hosted high-energy concerts, wrestling and basketball games for decades. It was imploded in 1997, while the $63 million BI-LO Center arose just down the street. With almost three times the seating of the beloved “Big Brown Box,” the modern-day arena now goes by the name Bon Secours Wellness Arena, which fans have shortened to “The Well.” 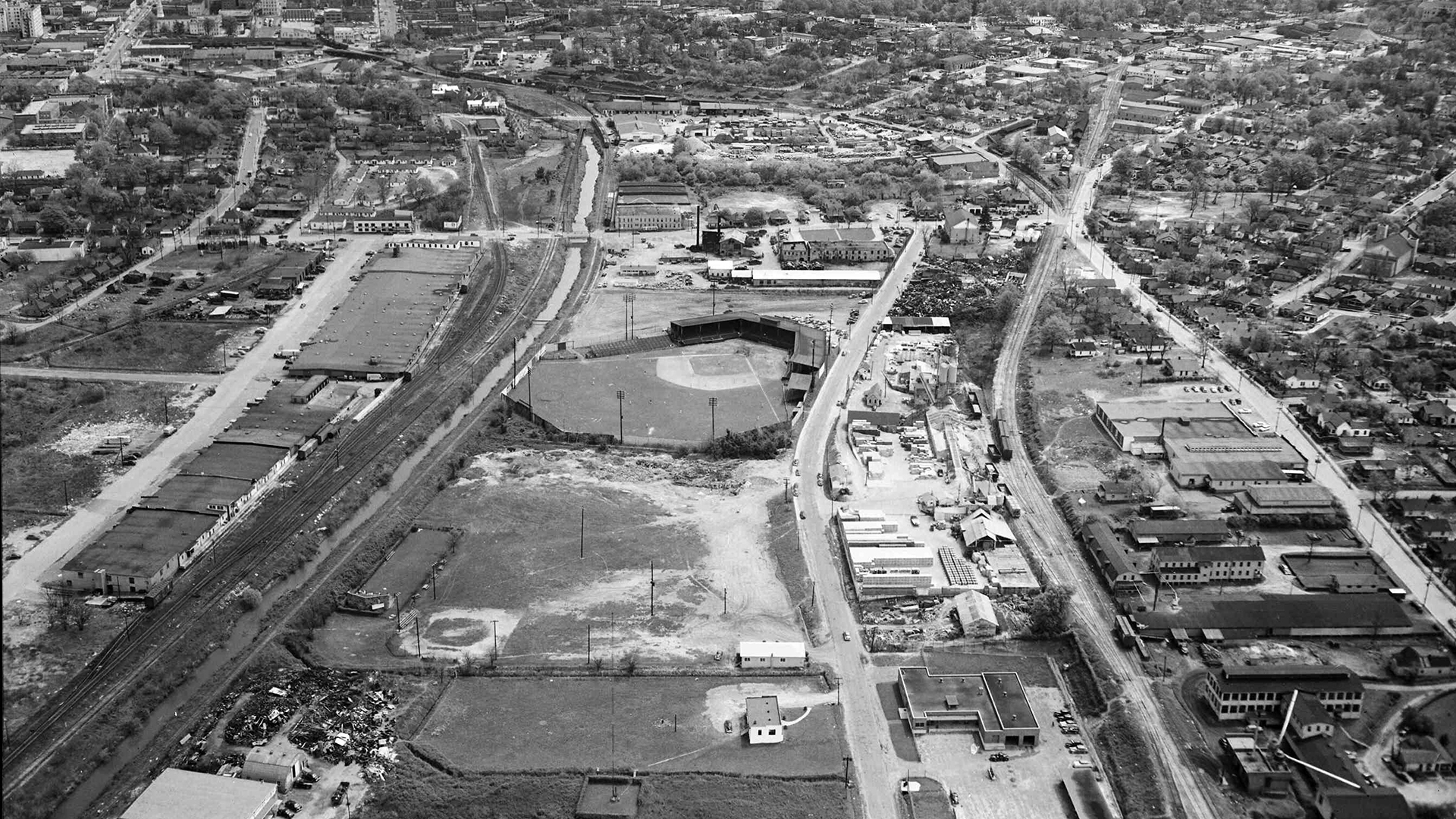 Meadowbrook Baseball Field: If you build it, they will come. The future home of Unity Park once served as Shoeless Joe Jackson’s playground and home of the Spinners: Meadowbrook Baseball Field. Other famous players to rise from the diamond there included Tommy Lasorda. The semi-pro field was flanked by the Reedy River, warehouses and train tracks on the west side of town, as well as a lesser field for minorities. The African American field was far from ideal, with permanent light poles standing within the infield and outfield areas of play, and the police pistol range mere feet off the third base line. 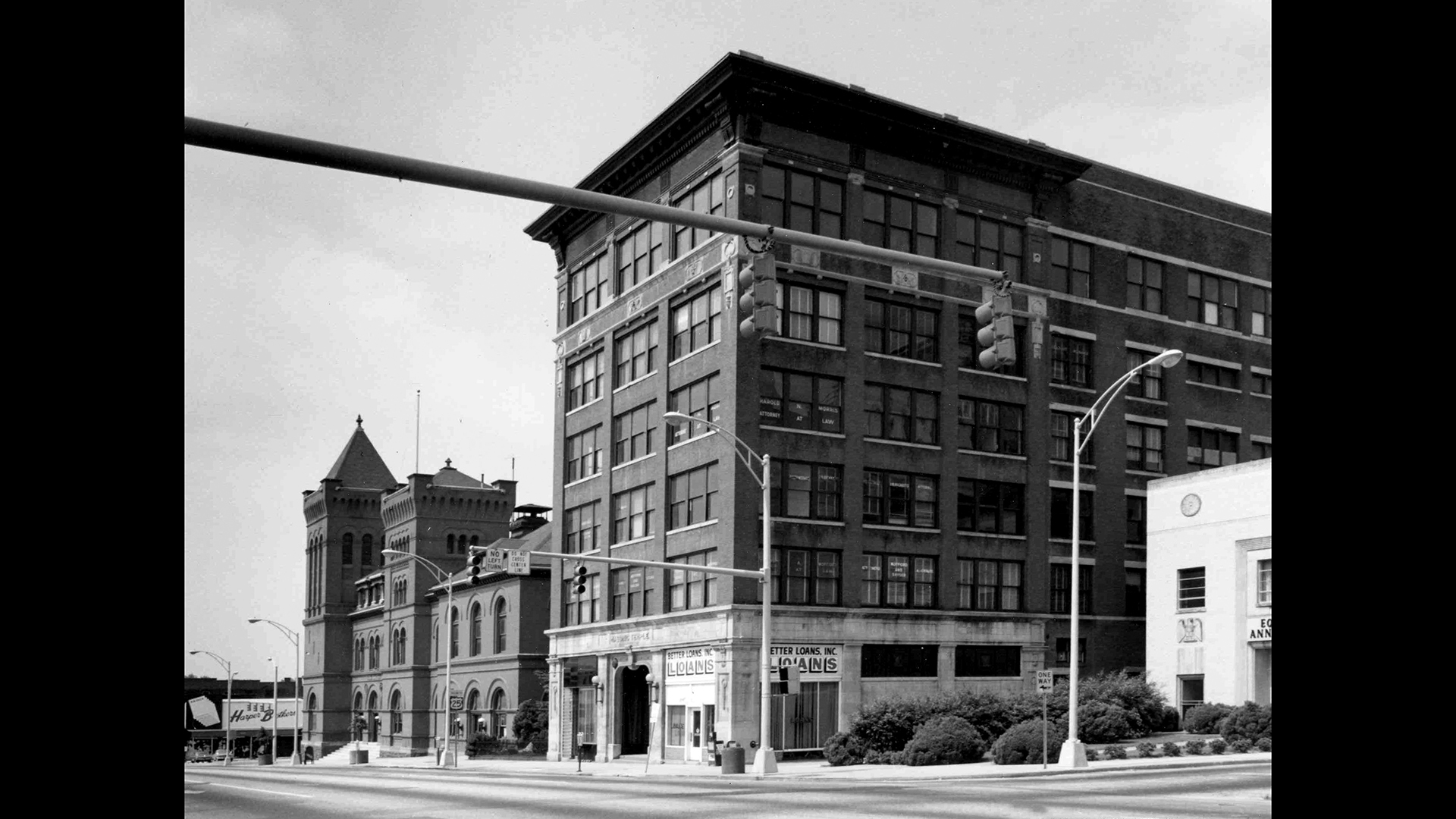 Masonic Temple 1958 & 1970: At the turn of the last century, Main Street witnessed a building boom that rivals today. The six-story Masonic Temple went up between the Romanesque Revival City Hall in 1909. By 1913, Greenville had grown into the “Textile Center of the South,” and the Masonic Temple was the unofficial headquarters of the industry. At one point in time, 24 of the Upstate’s 48 mills ran from offices inside the building, with mill owners frequently gathering to discuss business. During the Spanish Flu epidemic in 1915, members of the Greenville Rotary Club met on the roof, as they could not meet indoors anywhere else. Today, City Hall stands in the Temple’s old footprint.

Most of these photos are just one shot in a series of snapshots documenting historical places and events. A portion of the Jordan Collection is set to go up at GreenvilleHistory.org next month. The Historical Society is currently exploring options for a permanent location to house the thousands of negatives, slides and prints. 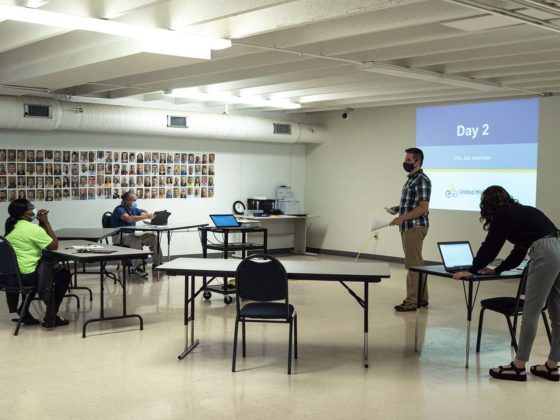 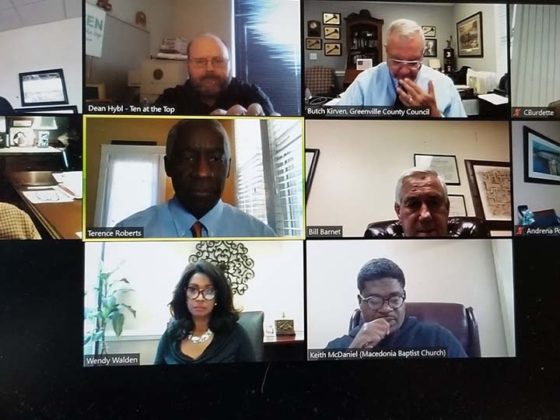