Red Benton turns left where crews are preparing to install a sediment pond and steers the orange Kubota four-wheeler onto a rutted gravel path.

Gravel crunches beneath its tires. It’s a summer morning on the Unity Park construction site, where Benton serves as senior superintendent for Harper General Contractors. Temperatures will soon soar into the 90s.

On a grassy patch of land to the left of the gravel path sits the former site of two warehouses the city purchased in 2018 and recently tore down.

Just beyond the lot where the warehouses once stood and almost out of view, excavators are ripping up sections of Welborn Street to lay a 42-inch sewer line. Duke Energy employees just finished burying power lines along this stretch of Welborn and are now removing utility poles along Hudson Street as they work their way toward West Washington Street.

Beyond Welborn sits The Commons market, offices and retail space. But on the gravel path, after Benton cuts the engine, the construction sounds are muffled to the point that it’s easy to make out the rustle of wind in the leaves of trees and the chirps of a female Northern cardinal and a Carolina wren. A young Northern mockingbird perches on a nearby branch, white bars on its wings, baby feathers molting into adult.

Across a small creek are two distinct urban wetlands. Peering through binoculars, David Palmer, president of the Greenville County Bird Club, identifies a flycatcher deep in the shadows, most likely an Eastern phoebe. Near the Reedy River, Palmer spots a belted kingfisher.

Visitors to The Commons could be forgiven if they don’t know these wetlands are here. That this creek is actually the Reedy River — or at least its original path before it was diverted into a 35-foot-wide channel nearly a century ago during the Great Depression.

But they will soon come to learn all that when Greenville’s 60-acre, $61 million Unity Park opens in a couple of years.

The transformative public-private project involves not only construction of the park but the creation of affordable housing on land in the Southernside neighborhood valued at $8 million or more and donated by the city to the Greenville Housing Fund.

With guidance from the residents of Southernside, GHF and the city have mapped out a plan for the surrounding streets – one that envisions a vibrant, sustainable and complementary mixed-income neighborhood protected from inappropriate infill and redevelopment.

Funded by a $50,000 grant from the TD Charitable Foundation, a just-completed feasibility study established the appropriate number of affordable housing units for the size of each parcel in order to scale with the neighborhood, says Bryan Brown, the housing fund’s CEO. The study established an architectural aesthetic and character for the affordable housing to ensure the homes fit in with the surrounding neighborhood.

What GHF is seeking, Brown says, is architecture that’s evocative of the park and connects residents to the outdoors and their neighbors by way of porches and terraces. Affordable and workforce housing should be indistinguishable from the high-end homes and condos that will inevitably get built on adjacent sites.

“We want to contribute to the vitality of any neighborhood where we are investing our resources,” he says. “We want to be seen as improving neighborhoods while maintaining housing affordability.”

Nearly 400 units are already in the planning stages, with the first scheduled to be completed by the time Unity Park opens in 2022.

In March, city officials delayed the start of park construction in order to assess the impact of COVID-19. The city has set a goal of raising $22 million in private funds. But with much of the public money coming from hospitality tax revenue and the city’s restaurants, bars and hotels reeling under the pandemic, the city has set aside $250,000 of Unity Park funding to help small, locally owned businesses with $1,000 microgrants.

With construction now underway, Harper General Contractors has set up shop near Hudson Street on the edge of what will become Michelin Green. Over the next several months, says Harper project manager Neil Wilson, construction equipment will be changing elevations and grades, removing unsuitable soil and contouring the land.

Stormwater drains will go in, followed by underground utilities and the construction of a new 207-vehicle parking lot to serve both the park and the businesses along Welborn. That work, in what Harper is calling Zone 1, is scheduled for completion early next year.

This fall, Harper will begin resculpting the river, starting at the west end and working its way downstream. Several areas will be widened to increase the active flood plain, which will help mitigate flooding during the most frequent storms. In addition, improvements to the soil will help the park drain more quickly. 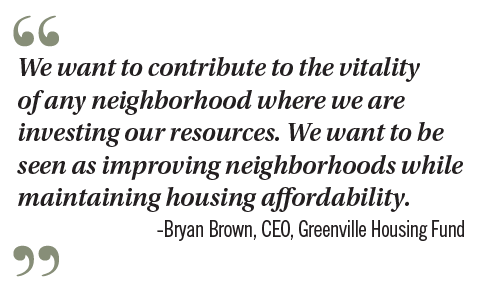 At an area of the river near where a pedestrian bridge will be constructed, crews have carved out a section of earth to model how the river’s steep banks will be benched. Landscape architect Barrett Armstrong of MKSK Studios describes how boulders will be used in places to stabilize the bank while trees and grasses create a riparian buffer to help with soil conservation and provide a natural river filtration.

Some trees along the river, particularly those growing at the water’s edge, will need to be removed, says Armstrong. Cut timber will be set back into the river to form natural habitats for fish and wildlife.

For every tree that is removed, two more will be planted, says Joelle Teachey, executive director of TreesUpstate, which has endorsed the city’s tree plan for Unity Park.

Most of the trees to be removed are invasive or in poor health, including the green ash and American elm threatened by the emerald ash borer and Dutch elm disease, respectively. Some large canopy trees like the sycamores and river birch are, sadly, in decline, she says.

About 200 trees will be preserved, and nearly 750 new trees will be planted as part of the reforestation plan designed to improve the overall health of the community forest by increasing biodiversity and the age structure. When complete, Unity Park will go from about 12 trees per acre to 20, with an extensive diversity of species suitable to the environment.

Unity Park will be a model, Teachey says, demonstrating the importance of getting arborists involved early in the planning to get their feedback in time to make suggested revisions. Harper has given TreesUpstate a seat at the table, and Teachey is eager to work with the contractor and its landscape installers.

Done correctly, she says, some of Unity Park’s trees will be around for more than a century and will provide public health, economic and environmental benefits for generations to come. 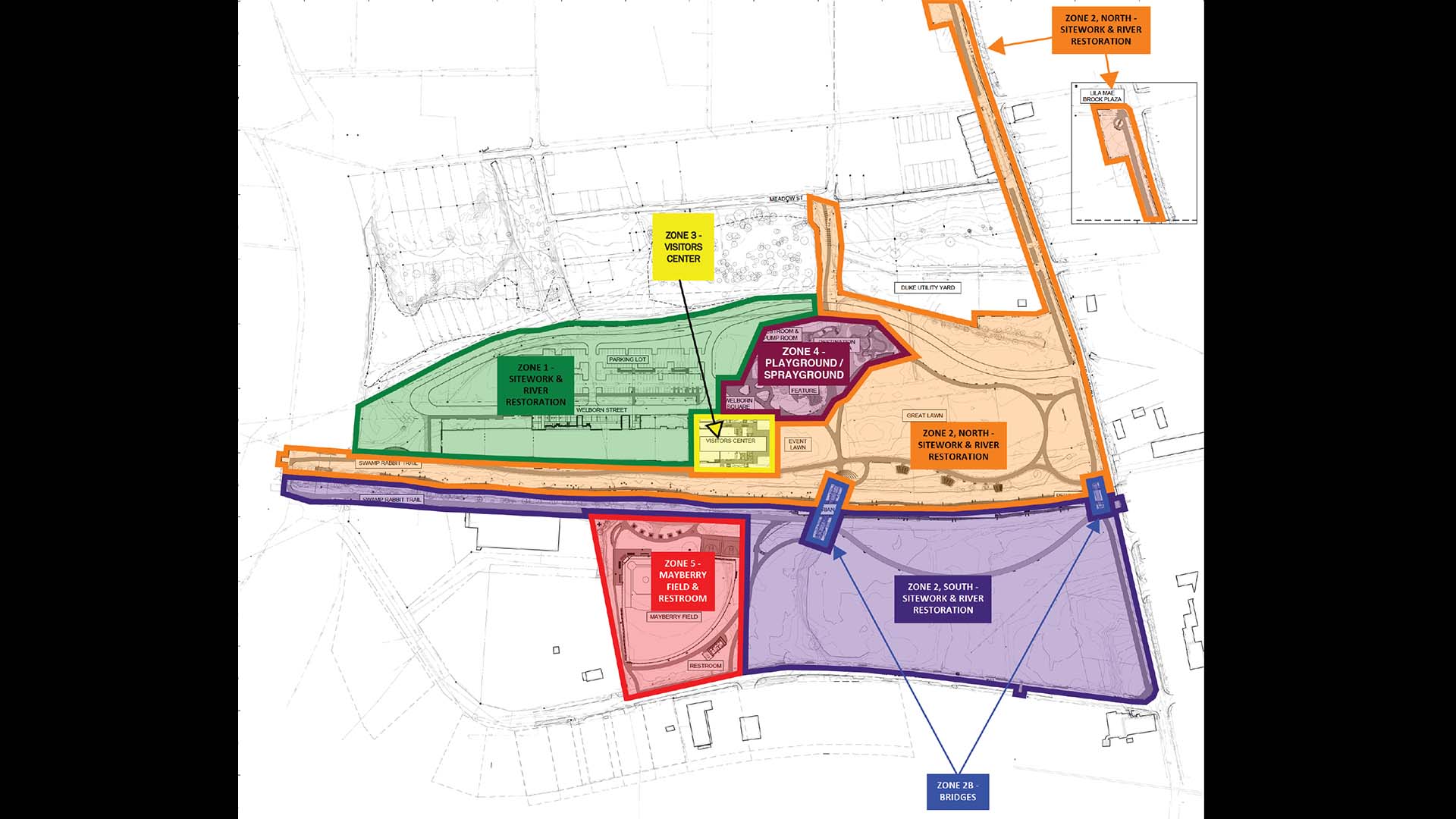