As more and more people begin to return to the office after months of working from home during the pandemic, pet owners may face problems in leaving their animals behind after so much togetherness.

New puppies adopted during the pandemic may not know a life without their humans around during the day. Older dogs may have gotten used to being able to go outside more often.

Dogs may suffer more than cats, said Dr. Madelynn Garrelts, a small animal veterinarian at Cleveland Park Animal Hospital in Greenville. She said cats tend to be more independent and self-reliant whereas dogs are social animals that tend to respond more to the people around them.

“Dogs are all about love,” Garrelts said. “They really look to us for entertainment.”

Dog owners going back to work could precipitate a common problem in canines — separation anxiety. Separation anxiety is the most common behavioral disorder in dogs and can develop at any age. Animals suffering this disorder typically show signs of distress — including panic — when left alone.  The signs include excessive barking, whining or howling and could include more destructive behaviors like chewing on furniture, doors, flooring or other household items. 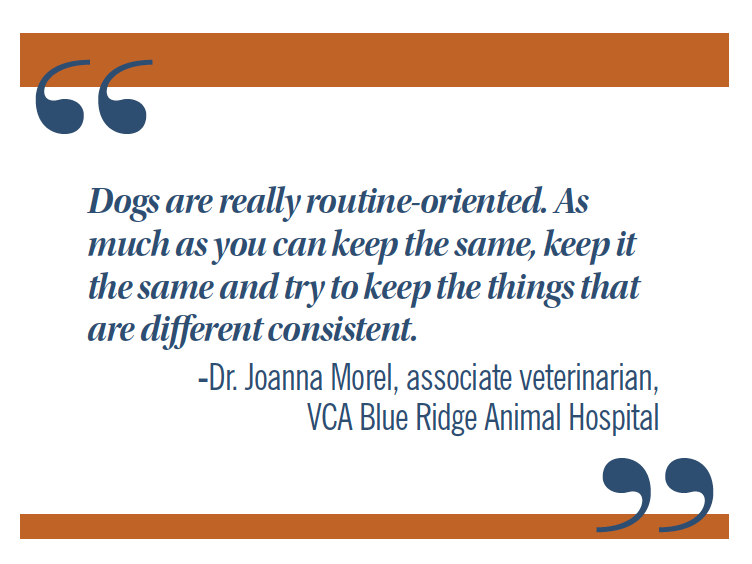 According to Cat Perry, manager at Dog Trainers Workshop and Boarding in Fountain Inn, the best way to forestall problem behaviors is for the owner to train the dog for success and independence. She, Garrelts and Morel said there are several components to preparing dogs to do well while their owners are away.

Perry said exercise is one of the best and easiest ways to keep your dog from getting into trouble while you’re gone. This means taking the dog for a walk and/or playing with them prior to leaving for an extended period of time.

She added that developing a routine of exercise is healthy for both the owner and the pet. A dog that has had 30 minutes of exercise prior to being left alone is more apt to want to rest once the owner leaves and is less likely to get into trouble.

“Turning your dog out in the backyard to run and saying, ‘Okay, I’ll be back in 30 minutes’ is not going to cut it,” Perry said.

Garrelts also said there are a number of interactive toys that can occupy a dog’s time and attention while home alone. She said playing music or leaving the television on might also help.

Stick to a routine

Morel said dogs can be sensitive to disruptions in their daily schedules, so planning ahead can help avert problems.

“Dogs are really routine-oriented,” she said. “As much as you can keep the same, keep it the same and try to keep the things that are different consistent.”

Morel and Garrelts said a good way to introduce a new routine like returning to work is starting with shorter trips away from home. Dogs struggle to adjust from spending all day, every day with you to being left alone for hours at a time. If possible, gradually build the dog’s stamina for being alone.

Morel also stressed that it is important for owners to practice “low-key reentry” when they get home. She explained that, to a dog, when their owner returns home they tend to get all the things they want out of life: attention, food, and toileting. A restrained return home can help prevent the dog from developing anxiety about the periods when no one is home.

“It can help to initially ignore them,” Morel said. “We want them to love us but not to the point of being pathological.”

Perry and Morel said training is one of the most effective ways of building good behavior and heading off bad behavior. Working with your dog is a powerful way to build a good relationship with the animal and to teach him responsibility.

“Training is always going to be the foundation of addressing any behavior issues,” Morel said.

Perry added that teaching basic obedience skills like responding to “sit” and “stay” commands can form a solid foundation for good behavior.

“You need to teach proper behavior rather than just expecting it,” Perry said. “These things are easy to do.”

Beyond obedience training, it’s important to crate train a dog, she added. Giving a dog a safe place to be confined can help keep the dog safe and help minimize problem behaviors.

“I want to come home and know my dog is safe and my home is safe,” Perry said.

Know when to seek help

Garrelts and Morel said in some cases no matter what steps an owner takes, a dog may still develop separation anxiety and exhibit destructive behaviors. Morel added that such behavior is one of the most common reasons owners relinquish their dogs, and behavior issues are the leading reasons dogs are euthanized in shelters.

She said that if behavior seems to be worsening, consulting a veterinarian is always a good idea.

“If you have any doubts we’d rather talk to you earlier,” Morel said. 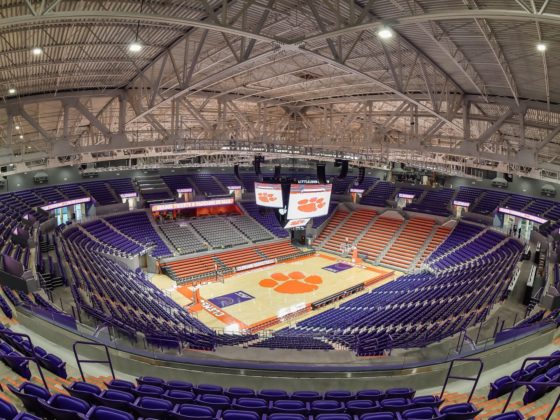