From start to finish, the city of Greenville’s “Mask Up. Life Is Waiting” campaign took just two weeks to build.

Beth Brotherton, the city’s director of communications and neighborhood relations, had been toying with the idea of a mask campaign for a while. More people were getting sick — not just the elderly — and not enough people were heeding the advice of medical professionals to wear masks.

“We wanted to make the concept of mask wearing more personal and perhaps in some ways show potential consequences of not wearing them,” Brotherton said.

She shared the idea with Community Journals Publisher Mark Johnston and its general manager, Susan Schwartzkopf, over lunch one day, and a campaign began taking shape.

“I mentioned to Beth that Community Journals has copywriting and photography resources that could supplement her team of professionals to bring the idea to life,” Schwartzkopf said. “After a few emails back and forth, we outlined the scope of the project, assembled a team, and within a week, models had been secured and the photo shoot was underway.”

Right away, Brotherton knew that the campaign would be far more effective if the photos were powerful and shot by a professional. She also wanted models who had connections to Greenville and real stories that would resonate with an audience.

To execute these ideas, Schwartzkopf brought in Jordana Megonigal, a local marketing and publishing consultant who had freelanced for Community Journals — the Greenville Journal’s parent company — in the past. Kristy Adair, magazine art director for Community Journals, and Bonfire Visuals rounded out the team.

One of Megonigal’s first steps was putting out a call for models on several Facebook groups.

“We wanted them to be diverse and showcase Greenville as it is,” Megonigal said.

Brotherton added: “This campaign is about real people in this community. No stock photos — that was important to me.”

The “Mask Up. Life Is Waiting” campaign was unveiled on July 17 at a news conference held in front of Falls Park. The city plans to promote the campaign through partnerships with VisitGreenvilleSC, hotels and major shopping centers like Magnolia Park, Haywood Mall and The Shops at Greenridge. Streetlights downtown will also soon sport “Mask Up” banners, Brotherton said.

The campaign even received an unexpected boost during a recent CNN interview with Mayor Knox White.

“Part of Community Journals’ mission is ‘To Inform. To Connect. To Inspire.’ The ‘Mask Up’ campaign does exactly that,” Schwartzkopf said. “Regardless of who you are … we all want to be safe and healthy.” 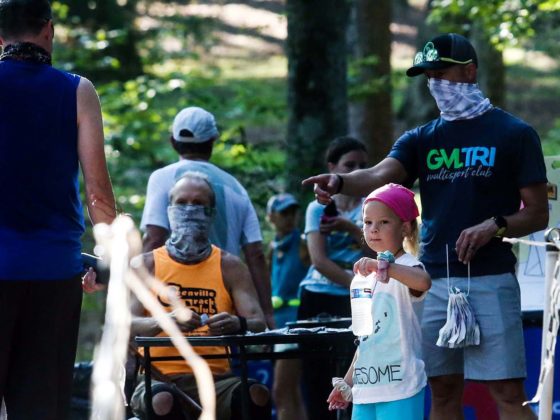