The opening of Liberty Bridge in 2004 marked a new era in Greenville history.

Gone was the outdated overpass-style bridge that obstructed views of the water in Falls Park. Those who never saw the Camperdown Bridge may not realize the full transformation of Greenville’s West End neighborhood.

The construction and opening of Liberty Bridge provided the West End with a cutting-edge, stylish reputation. More importantly, the bridge presented Greenville as a modern competitor with other growing cities. In the 15 years since the opening of Liberty Bridge, Greenville County has seen unprecedented economic and population growth. The Liberty Bridge may not have caused this astounding growth, but it has solidified Greenville as an economic and aesthetic leader of the Upstate, of South Carolina, and of the United States.

Cities rely on aesthetic value, among other factors, to demonstrate that they are thriving and healthy. Thriving cities look organized and constantly have new developments; healthy cities have effective transportation and plenty of green space. On the other hand, dying cities often appear neglected and lack substantial growth.

Until 2004, Greenville was one of those cities. Once a bustling textile town, downtown Greenville was poor and irrelevant in the decades before the turn of the century. There was hardly any industry; not much drew families to the area, and one of the most beautiful sites was covered up by a four-lane highway bridge.

Greenville Mayor Knox White wanted change from the beginning of his leadership. “We were lagging and had been for 40, 50 years. The city population had been declining. That’s not untypical of cities around the country, but we decided to push back,” White says.

For 30 to 40 years, White explains that all development took place on the east side and in suburban areas of Greenville County. That left downtown neglected.

“There was nothing in the West End, there was no baseball stadium, there was no RiverPlace, there was no Falls Park. Most people who lived in Greenville were not even aware we had a waterfall. It’s hard to imagine that now. But that’s true. So in 2001, we voted to remove the bridge, which was called the Camperdown Bridge. It was very controversial,” White says.

“So we had about a five-year campaign to reclaim the waterfall. It was a very difficult argument to make politically. The story [of Liberty Bridge] starts with the Carolina Foothills Garden Club. They had a plan for the park for decades, to make it into a park. But as long as the [Camperdown] bridge was there, they would never realize the plans. So we had to summon up the forces to promote the [Liberty] bridge. And we did.” 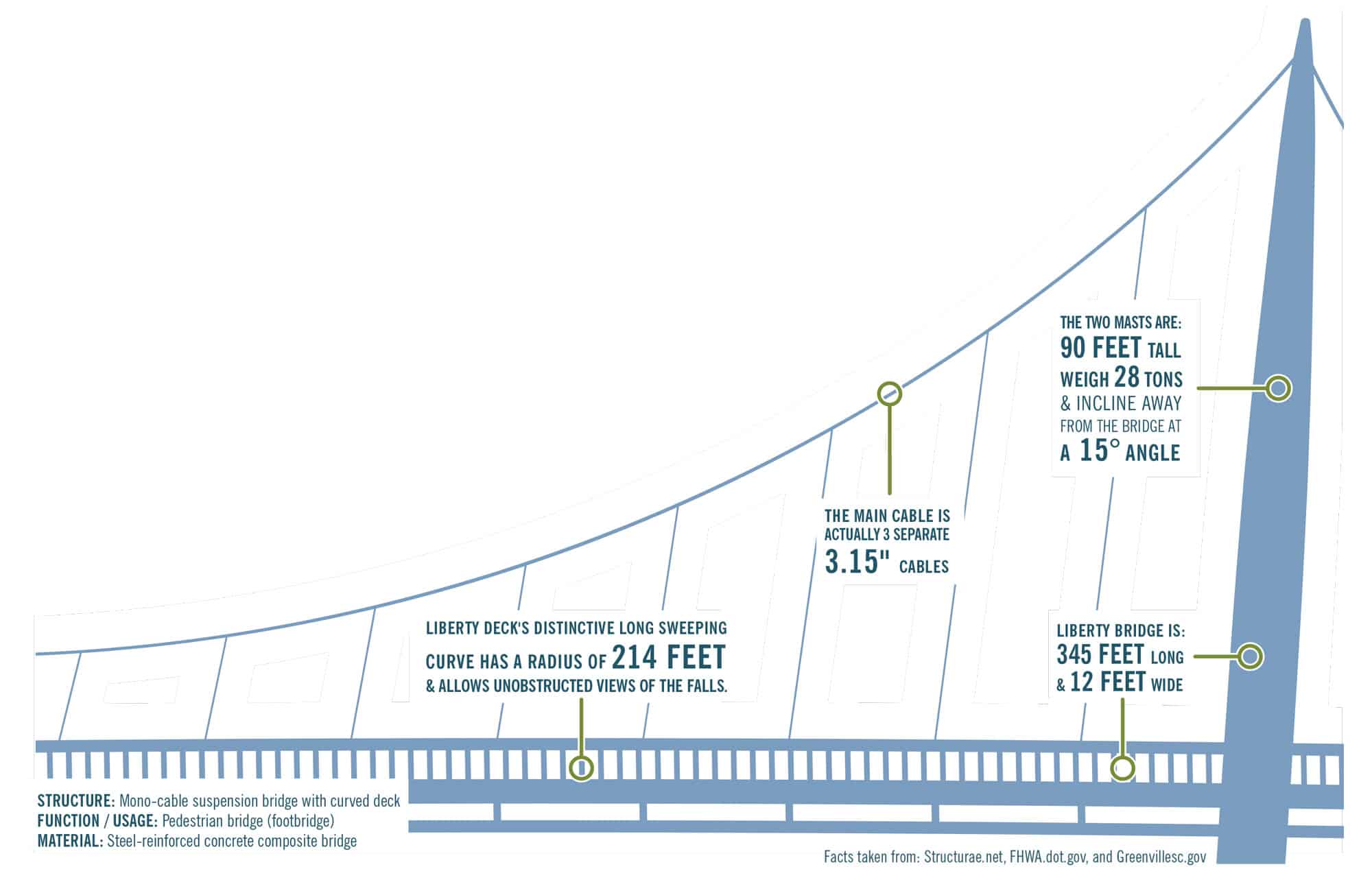 Removing Camperdown Bridge
The Carolina Foothills Garden Club, landscape architect Andrea Mains, and Mayor White shared a vision to restore the natural beauty of the Reedy River Falls area. This vision finally proceeded in 2002 when the Camperdown Bridge was removed. However, though many people had hoped for this project, the Camperdown removal was met with some resistance.

“Now, the first issue we ran into after the extended controversy over removing the bridge was, do we go back and put another bridge on top of the waterfall? Some people saw that that might not be a very smart thing to do. Maybe we should wait or something. But we went ahead,” Knox says. “She [Mains] urged us because it would be a different kind of bridge.”

Designing Liberty Bridge
Even in the preliminary stages of designing the Liberty Bridge, Mains envisioned a pedestrian bridge across Reedy River Falls.

White explains that Mains “said many times the problem with the waterfalls is you can’t see them very well. So the idea of having a bridge to let you see the waterfall in a way you’ve never seen it before was her vision. And we adopted it.”

At this point, Boston architect Miguel Rosales of Rosales & Partners came on the scene. Rosales shared the vision of building a pedestrian bridge across the falls. He came up with the idea of curving the bridge; this way, the falls would be complemented by a more natural form, not overpowered by clunky design.

“He’d never seen anything like this waterfall, an urban waterfall,” White says. “He knew his job was to build a bridge that sort of floats above the waterfall, that doesn’t dominate the falls.” White says that when Rosales interviewed for the job, “It was almost like he read our minds. He wanted to make sure that the waterfall was the most important thing to see.”

Chances are you’ve seen the Liberty Bridge reprinted and redesigned dozens of ways — the city’s adopted logo can be found on everything from cups and T-shirts to cufflinks and posters. Having such a recognizable symbol is another step in the right direction for Greenville. Images of the Liberty Bridge capture the city’s progressive achievements, its standalone landscape, and its vibrant culture. The Liberty Bridge itself is a symbol of progress and achievement; it is a response to Greenville’s major growth and a reminder to always look forward.

A conversation with architect Miguel Rosales

GJ: What inspired your design of the Liberty Bridge?
MR: The bridge site with its beautiful waterfall, mature trees and landscape inspired me to create a light, transparent, and elegant bridge that would blend with the environment.  Nature and technology completing each other.

GJ: How did you respond to the surrounding environment?
MR: We curved the bridge away  from the waterfall and created a visual counterpoint.  Also located the towers and cables leaning back so the view of the waterfall would not be impacted in any way.  The end effect is very dramatic and compelling.

GJ: How closely did you have to work with a structural engineer?
MR: Our office is specialized in bridges and we have structural engineers on staff.  For the Liberty Bridge we collaborated with SBP a company headquartered in Germany but we acted as Engineers of Record during final design.  Successful bridges always balance aesthetics and engineering and we strive to concibe the best posible solution which while being innovative and well integrated into the context is also cost effective.

GJ: What kind of challenges did you face during the design and then construction of the bridge?


MR: A unique bridge with a configuration never built before was challenging because there were no precedents 15 years ago and most of the detailing was specify designed for the bridge.  It also was a challenge to build such a bridge within a reasonable cost without compromising the bridge architecture.  At the time of construction the bridge cost was $4.5 million which now feels like a bargain given all the benefits and  visibility the bridge has given to Greenville.  It is very rewarding that the Greenville community is proud of the Liberty Bridge and I am looking forward to attending the upcoming 15th Year Anniversary celebration. 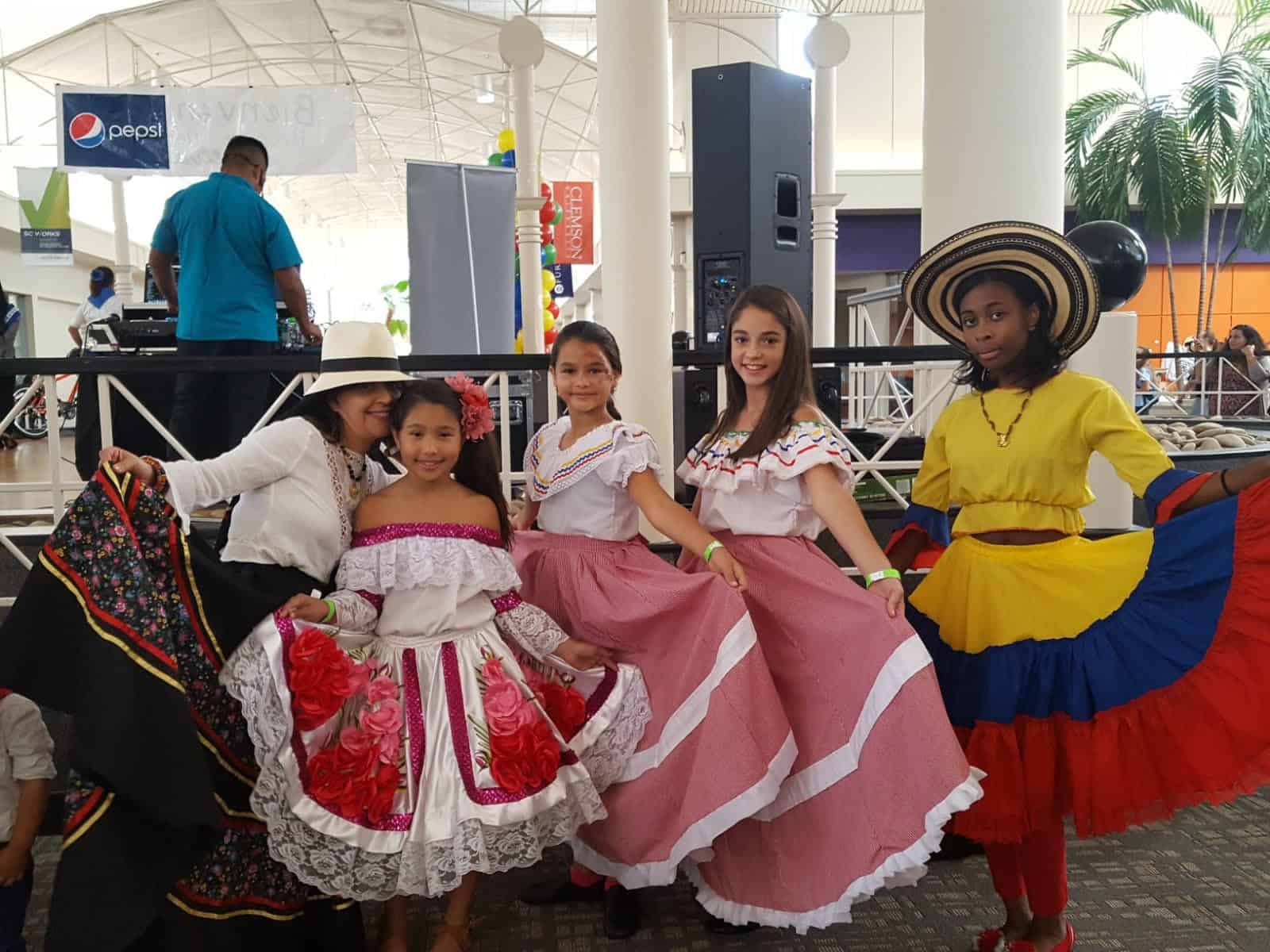 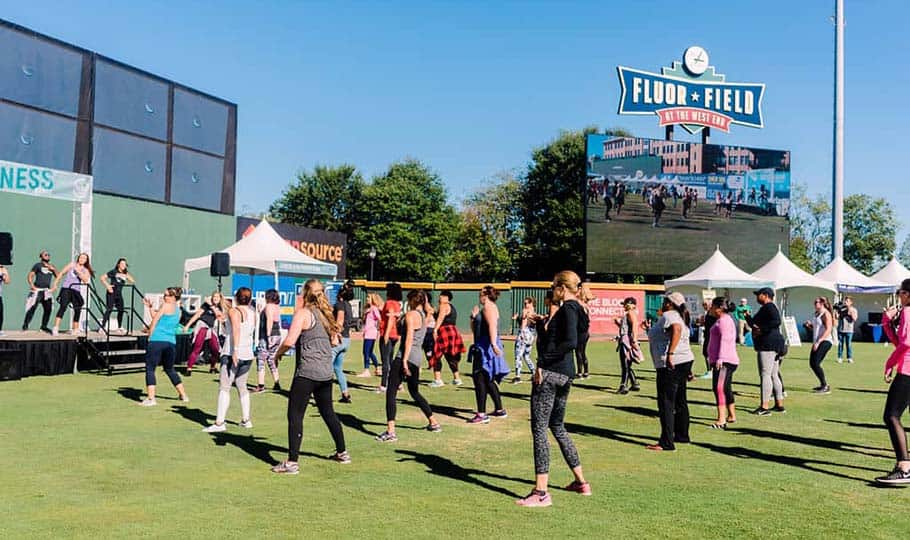 The NESS Fest creates a movement for a healthier Upstate