Bandit sits — because he can’t stand on his hind legs — on the deck of his temporary home at Small But Mighty Rescue. He arrived here three weeks ago after he was hit by a car.

On a recent morning in Campobello, he appears ready to tell his story, alongside the nonprofit’s owners, Liz Skomra and Scott Butler. With their permission, this Q&A has been edited for pronouns, Liz providing most of the interpretation from the Chihuahua-ese as noted. 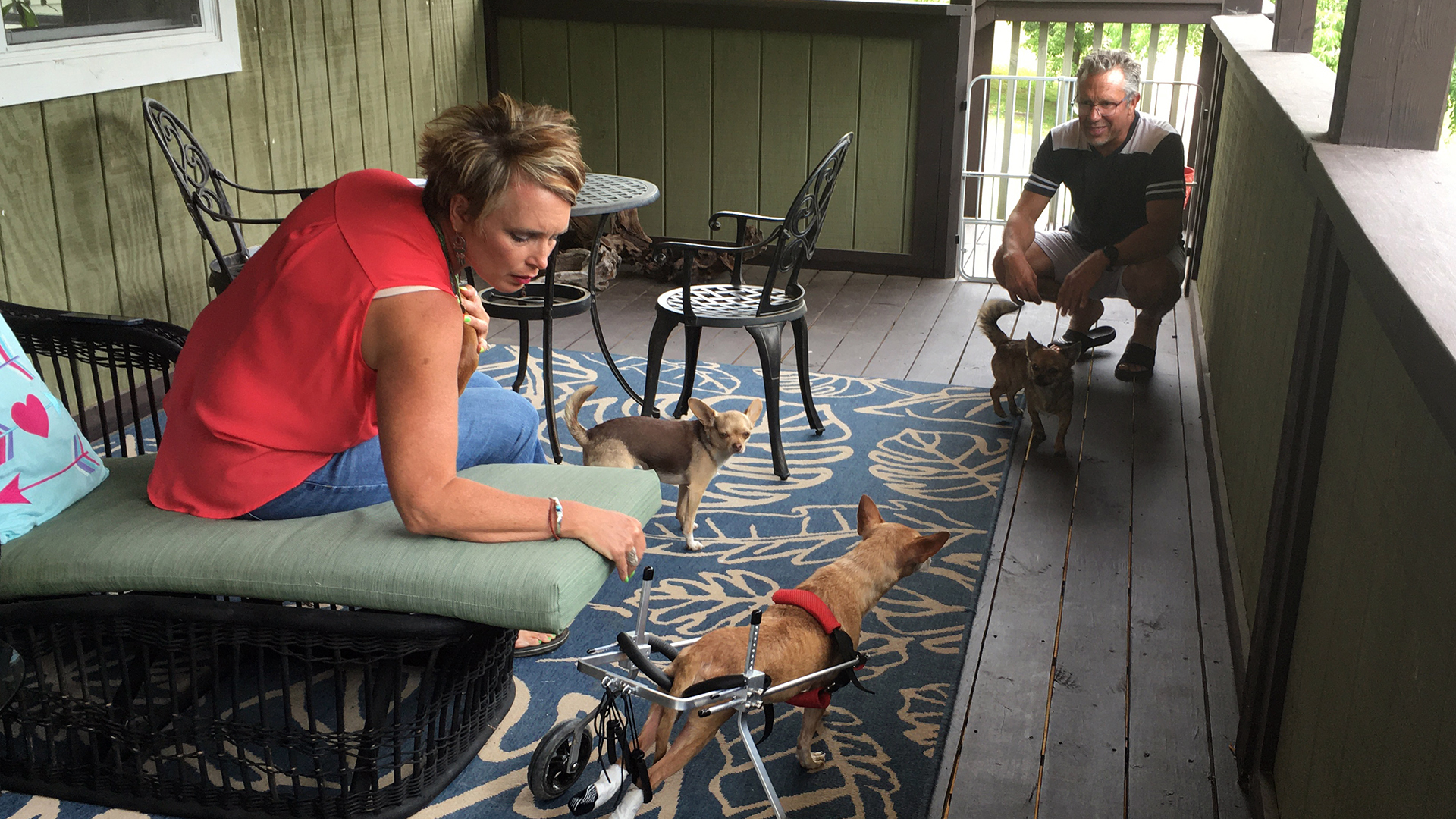 The following has also been condensed, with Frida, Ruby, Mr. T (also called Tiny Tim) and Pickle chiming in from time to time:

Greenville Journal: Geez, fella, what happened to you? I mean, I see Mr. T here with holes in his ears because Liz says some kid used a paper punch on him and …

Bandit: The Spartanburg Humane Society said that the owner brought me in and said, ‘Okay, we don’t want him anymore.’ And so I was untreated for two months with broken legs.

I am 12 years old and I have to learn how to live now with only my front legs. I’m suffering from extreme separation anxiety because the only people I knew got rid of me after this horrific accident.

GJ: Liz says they will waive your adoption fee and throw in the $200 wheelchair.

Bandit: I need to go to a very special home, that special person, a loving compassionate person who understands I deserve to live out the final chapter of life in a warm, caring environment where someone can handle disabilities.

GJ: You and these others, you’re all the same breed.

Bandit: Yeah, they focus on Chihuahuas because that is the second most-euthanized breed in the world after pit bulls.

Bandit: There are a lot of people that have Chihuahuas and what happens is, they believe that we’re these little pocket, purse dogs. And then what happens is, they find out that we have these big personalities and then the next thing you know, they don’t necessarily want to deal with it. They want this quiet little dog that rides around in their purse.

I mean, we’re all different. Some are quiet, but all of us have unique personalities, our personalities are like, big.

GJ: It looks like you’re ignoring Lotus, the yowling Siamese cat. How do the other dogs treat you here?

Bandit: I’m just sad because I lost my back legs. Yeah, it makes me sad or frustrated. Yeah, I see them having fun like I used to have. It’s really rewarding to watch them come in from wherever they were from and get to know each other and start to have fun again. [Scott] 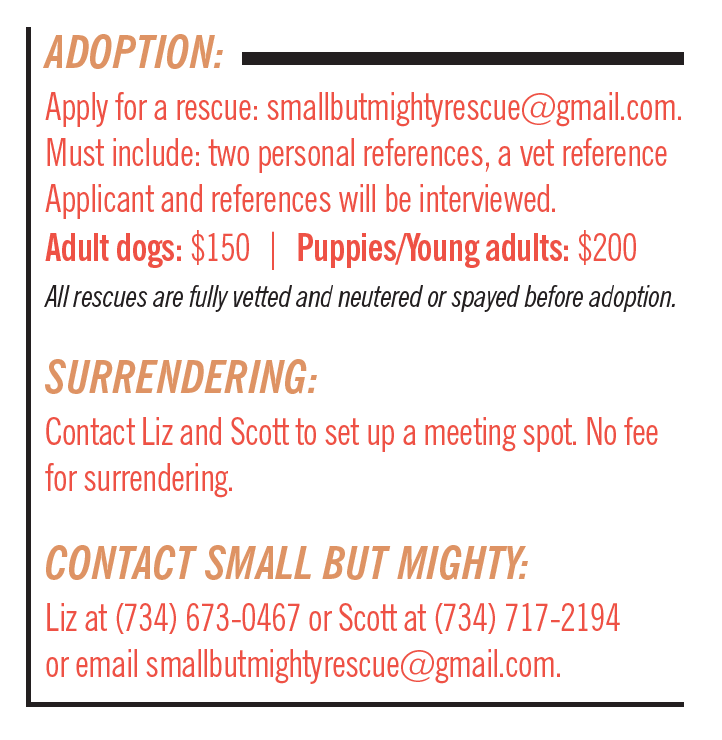 GJ: What has your experience been with the pandemic?

Bandit: COVID  has been bad for people but good for dogs because people are home, and so they are more willing to bring a rescue or dog into their life. Small dogs in particular have been exceptionally in demand.

Unfortunately, the big dogs are the ones that are building up in the shelters. But now with the world opening back up, they can start to see a little decrease and people are asking for small dogs because they’re going back to work.

GJ: So it’s looking pretty good for you, then. Liz says the others get ‘rehomed,’ as they call getting adopted, in about two weeks, but you in about a month? Where do you think you’ll go?

Bandit: A lot of times, seniors want seniors, they don’t want a high-maintenance dog. They just want someone who will sit on their lap, sit next to them on the couch and watch TV.

GJ: C’mon, man, a wheelchair, that’s high-maintenance, although Liz says they take you out for — y’know — on your regular schedule.

Bandit: The only requirement is you have to pick up a 15-pound dog. I’m really low maintenance, and I’m appreciative. I’m going to appreciate the humans I’m with. 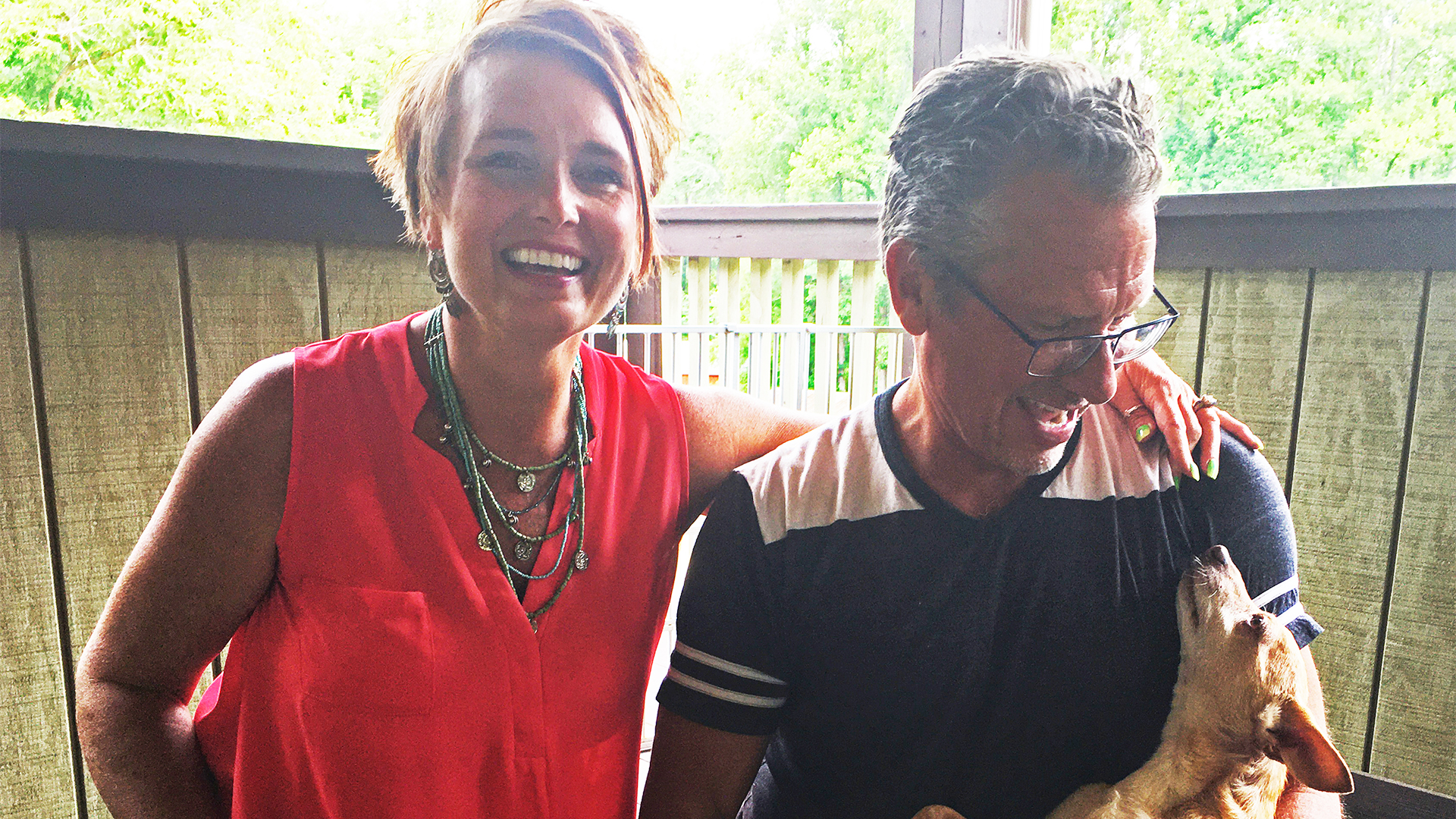 Liz Skomra and Scott Butler have been married 15 years and moved to their 23-acre spread, a former horse farm, last year. They opened Small But Mighty Dog Rescue after adopting Frida and Mr. T from Petfinders and falling head over heels for the breed.

They call adoption “rehoming.” Half of the dogs they take in — no more than 10 at a time —come from the Spartanburg Humane Society, the rest from “owner surrender,” they say.

They spend upwards of $800 per dog, and so far costs have reached roughly $10,000; Scott works in finance at BMW and Liz is an account manager at a Spartanburg manufacturer of polyester resins and specialty polymers. Small But Mighty relies heavily on donations.

“Rescuing is never easy,” Liz says, “but it’s always rewarding. I guarantee, if you take a rescue dog and you give them patience, love and kindness, it’ll be one of the most rewarding experiences of your life.

How to Adopt or Surrender a Chihuahua to Small But Mighty

Due to the high demand, most rescues are at SBM for only a few weeks. Updates on available dogs and status can be viewed on Facebook or Instagram.  To contact Small But Mighty Rescue, call Liz at (734) 673-0467or Scott at (734) 717-2194 or email smallbutmightyrescue@gmail.com

To apply for a rescue, email smallbutmightyrescue@gmail.com. Applicants must include two personal references, as well as a vet reference. SBM’s adoption coordinator, Donna Koegler, will interview the applicant and references.

Adult dogs are $150 and puppies and young adults are $200.  All rescues are fully vetted and neutered or spayed before adoption.

To surrender a dog to SBM, contact Liz and Scott to set up a meeting spot. No fee for surrendering. 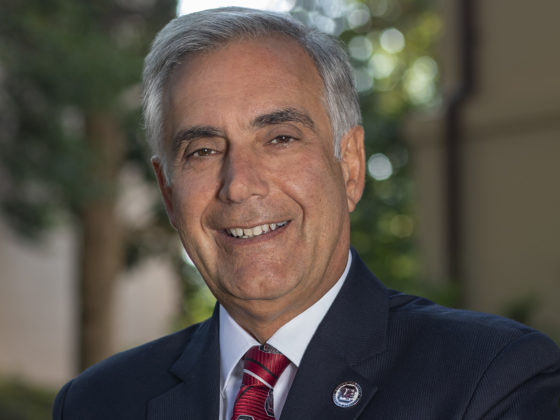 Fall for Greenville to return Oct. 8-10