The Pavilion Recreational Complex is scheduled to close for renovations March 1 with a scheduled reopening set for Sept. 30. The upgrades to the facility include new locker rooms and an expanded entrance area and follow a 2016 closure that allowed Pavilion personnel to upgrade the rink’s ice and refrigeration system.

The upgrades have been needed for decades, says Bob Mihalic, governmental affairs coordinator for Greenville County.

“These are the changes that our patrons who use the ice most often have asked for,” he says. “In 2016, we upgraded the ice, and now we’re focused on the amenities around the ice. It will get our facility ready for the next few decades.”

Every part of the facility will be closed, including the main rink, the in-line rink and the bounce house area. Only the outdoor tennis courts will remain open during the seven-month period.

The rink is currently open to the public seven days a week and serves more than 180,000 people annually, according to Mihalic.

Notice of the closure was announced in July 2019. For many of the Pavilion’s user groups, the announcement began an exodus to new ice in a region of the country where it can be hard to find.

The Pavilion currently hosts 26 adult hockey teams and 13 youth hockey teams. Among them are the Clemson University Tigers and the Greenville Swamp Rabbits, which splits its practice time between the Pavilion and Bon Secours Wellness Arena.

“This is my home rink. I’ve been here since day one,” says Charis Sloan, a contracted figure skating instructor who grew up learning to skate at the Pavilion.

Sloan, who lives 45 minutes away from the rink, teaches there 12 to 15 hours a week. During the closure, she plans to travel to the nearest available rinks in Irmo or Indian Trail, North Carolina, to continue teaching with her most dedicated skaters.

“Some students on the fringes of the sport will be faced with a decision: drive two hours away to another rink or just take time off,” says Sloan, who anticipates losing up to a third of her students due to the logistics and cost of making it to another rink.

“Right now, we’re going through a boom with a lot of people moving into town from other areas of the U.S. and the world. For the longest time, we were the only rink in the state,” Sloan says. “That’s a big thing to be part of, but at the same time, this rink wasn’t planned to serve that big of a population.”

She anticipates the expanded locker rooms and changing areas will provide safer experiences for her students. 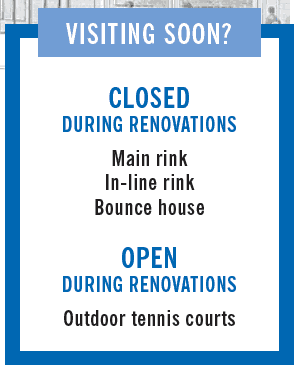 The Palmetto Curling Club has found a new temporary rink much closer to home. The club has been meeting on Tuesday nights at the Pavilion since 2010, and was the first of its kind in the state.

With its member count nearing 100, the club needed to find a new place to curl before its spring season, which starts in March.

During the closure period, the club will move to the Ice Station at 211 School St. in Greer. The new private rink, which will also be shared by the Carolina Rage youth hockey league, will be available for use in February.