It seems like only a few short months ago that Deshaun Watson was connecting with Hunter Renfrow to seal Clemson’s first national championship since 1981. What a magical ride the 2016 season turned out to be for Clemson fans.

If you had heart issues, last season surely didn’t do you any favors, as Clemson was able to win seven of its 15 games by less than eight points. To say Clemson was clutch in crunch time would be a severe understatement. However, as head coach Dabo Swinney has said, that was last year’s team, and the 2017 team hasn’t earned anything yet.

Clemson has a young roster with plenty of talented players who have experience playing on the biggest of stages. This year’s team will need to lean on that experience to reach double-digit wins for the seventh consecutive year. Let’s take a look and see how the 2017 Clemson Tigers will shape up.

If there was a reason Clemson won seven games by less than eight points last year, it was for a good reason: The Tigers played some very strong defenses.

And when it comes to the 2017 schedule, it’s not without its share of difficulties.

Clemson starts out with a layup in the home opener versus Kent State. This will be critical with the number of first-time starters on offense. Those guys will need to gel quickly, because the remainder of September gets very difficult. Auburn comes to Death Valley the next week, and with a revamped passing attack under transfer Jarrett Stidham, the SEC team is certainly capable of beating Clemson.

Later in September, Swinney’s Tigers will have to travel to both Louisville and Virginia Tech, two teams the Tigers squeaked out wins against last season.

November presents a share of problems as well. Traveling to N.C. State on Nov. 4 won’t be a walk in the park. The following week, the Tigers host Florida State at home, in what has been a de facto playoff game for making the ACC championship the last handful of years.

It’s hard to predict how the Tigers will finish the season with so many unknowns. The defense should be one of the best we’ve seen, so one figures that if they can get production out of the quarterback position, a return trip to the playoffs is not out of the question.

That’s a pretty big if, though. We’ll know much more about this team by the end of September.

With the departure of Deshaun Watson, there are some big shoes to fill at quarterback for the Tigers. Luckily, Clemson has recruited the position well, and the cupboard is far from bare. Junior Kelly Bryant will lead Clemson’s offense to start the season. Redshirt freshman Zerrick Cooper and true freshman Hunter Johnson will go back and forth throughout the season to try to take command of the backup spot. Coach Swinney has said both will see playing time this year. 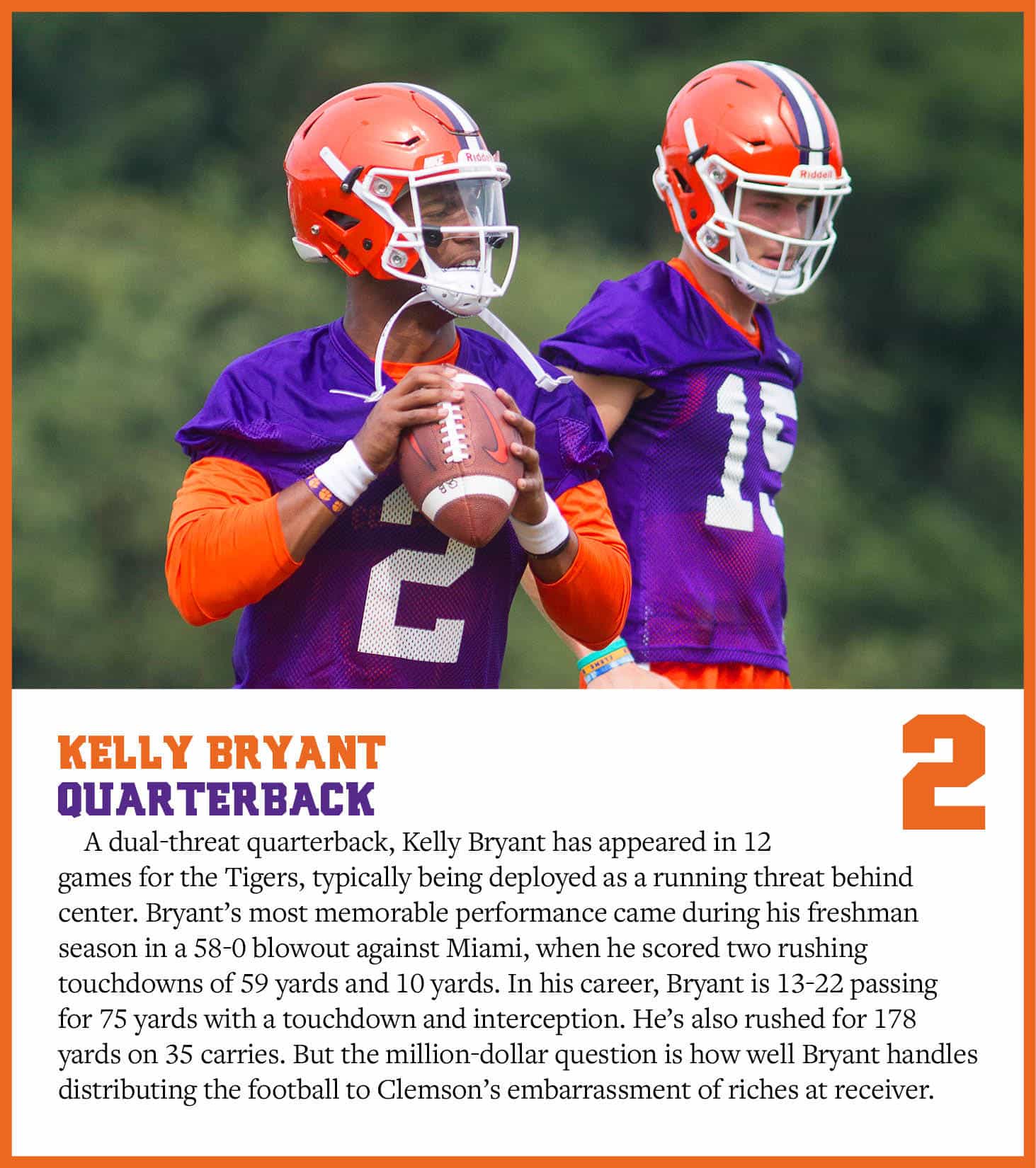 For the last three seasons, Wayne Gallman was a workhorse for the Tigers, leading the team in carries and yards on the ground. The consistency he provided at the running back position will be missed, but the Tigers have plenty of options moving forward. Redshirt junior C.J. Fuller will be at the top of the depth chart followed by sophomore Tavien Feaster and redshirt junior Adam Choice. Collectively, the three haven’t seen a lot of action on the field. Last year, Fuller led the group with 47 carries, followed by Choice’s 45 and Feaster’s 37. True freshman and Louisiana native Travis Etienne, who chose Clemson over LSU, has garnered praise from coaches, who say he has elite vision that can’t be taught. Expect the Tigers to be a running back by committee to start the season.

Even with the departures of Mike Williams and Artavis Scott, Clemson should be able to reload at the position with a mix of proven production and new talent. There should be little to no drop off at that position. The first-team trio of wide receivers Clemson will roll out should feature Deon Cain, Hunter Renfrow, and Ray-Ray McCloud. Co-offensive coordinator Jeff Scott said he feels that he has nine receivers who could start at any point and be productive. Sophomore Cornell Powell is one of the most physical receivers on the team, and sophomore Deondre Overton should also get more playing time. Clemson also has two highly touted true freshmen in Tee Higgins and Amari Rodgers. The 6-foot-5 Higgins is already drawing comparisons to former Georgia Bulldog and current Cincinnati Bengals wide receiver A.J. Green. At 5 foot 9, Rogers figures to be a slot receiver and has been praised for his good hands. Clemson is simply stacked here; the only thing that could hold them back is the ability for the quarterback to get them the ball. 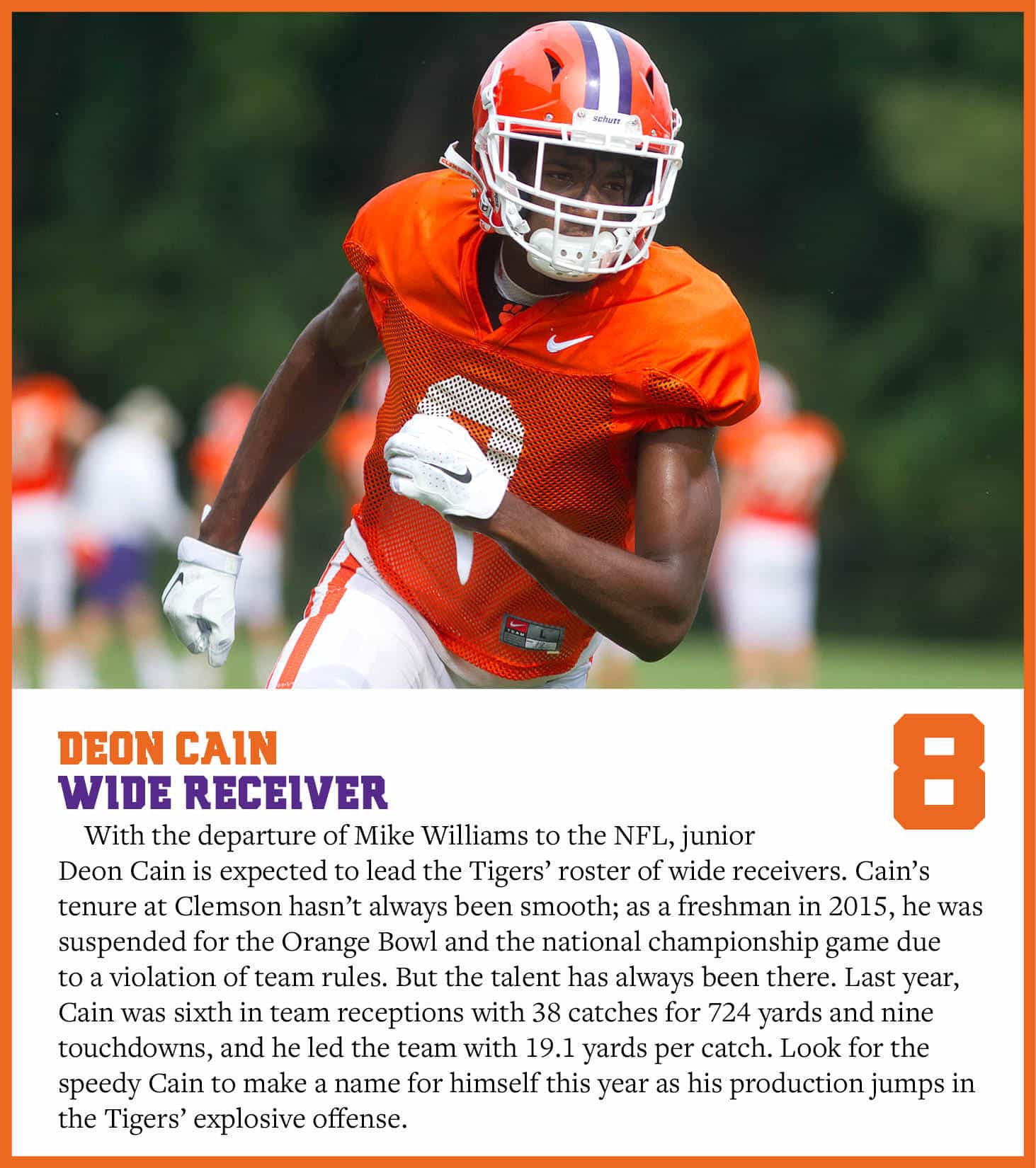 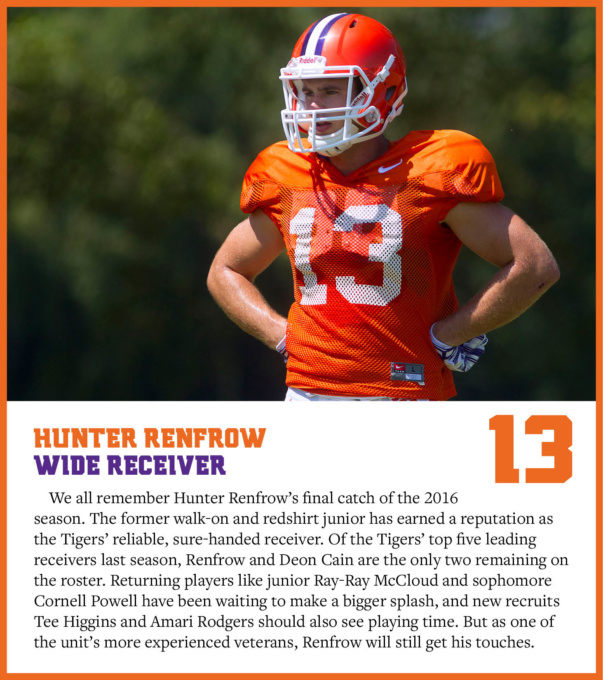 The tight end position is one of the thinner units on the roster for Clemson. Clemson will replace Jordan Leggett with redshirt junior Milan Richard. Richard came to Clemson as the sixth best tight end in the country coming out of high school and is the nephew of Herschel Walker. Richard is a downfield threat in the passing game with the ability to make catches in traffic and get separation from defenders. What he will need to improve upon will be his blocking, particularly in short-yardage situations.

Clemson returns four out of five starters from last year’s team. Anchoring the line will be junior Mitch Hyatt at left tackle. Opposite of Hyatt will be true sophomore Sean Pollard, who was forced into action last season when Jake Fruhmorgen left the team for personal reasons. Pollard held up very well, and with added muscle, he looks to become an even bigger force on the line. Starting guards Tyrone Crowder and Taylor Hearn return, with talented sophomore John Simpson providing quality depth. Having continuity in this talented and experienced offensive line is critical for a Clemson offense that is replacing so many pieces from the 2016 season. 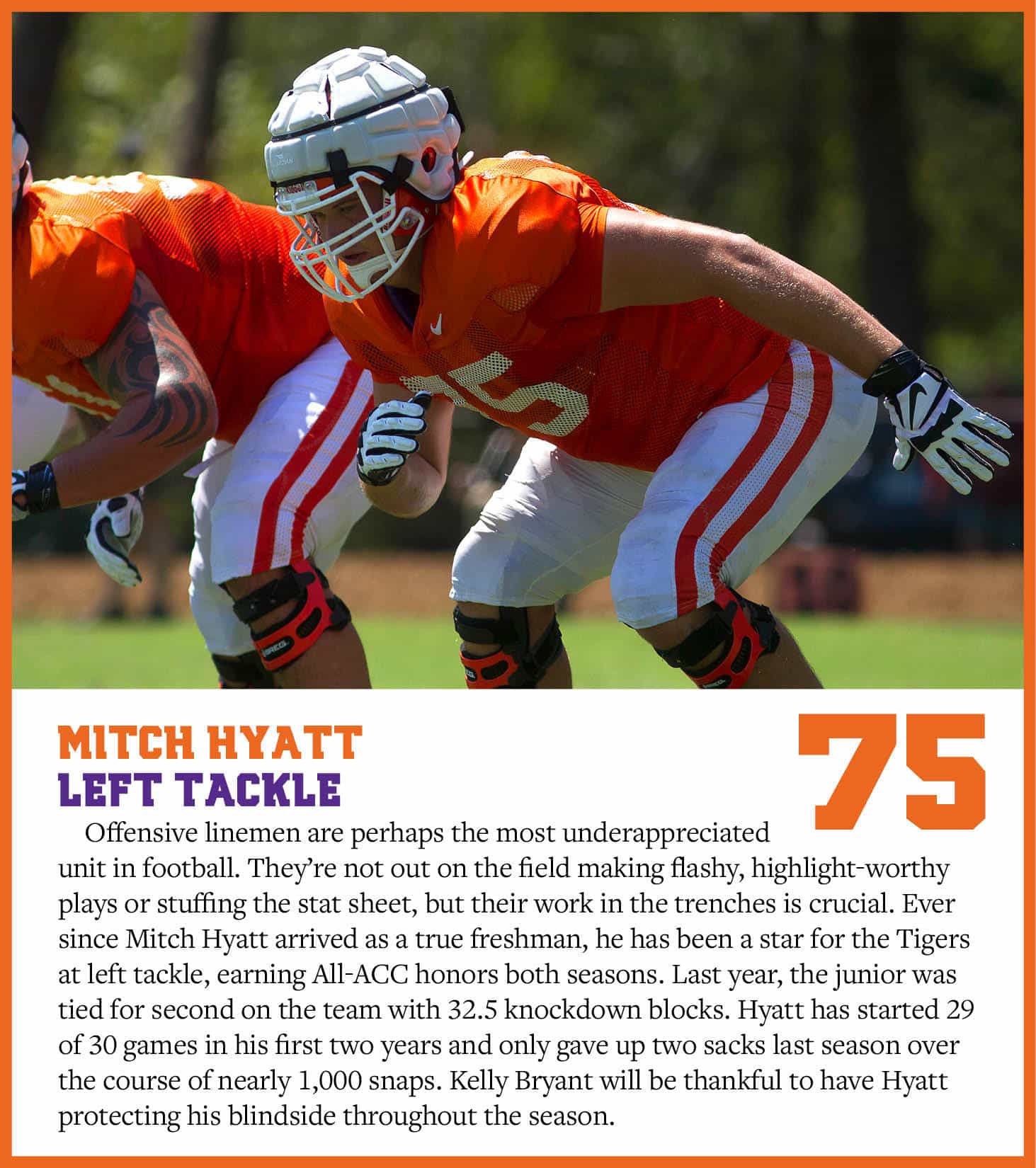 Swinney and defensive coordinator Brent Venables continue to reload at this critical position. The Tigers have one of the best defensive lines in the country and in school history. It all starts up front with junior Christian Wilkins and sophomore Dexter Lawrence. Wilkins represents a rare blend of size, speed, freaky athleticism, and a high football IQ. Lawrence is simply a mountain of a man, and it was clear upon his arrival last year that he would be too talented to keep off the field. At 6 foot 5 and 340 pounds, Lawrence possesses a striking amount of athleticism for someone his size. The defensive end spots will be held down by redshirt sophomore Clelin Ferrell and junior Austin Bryant.

Both players were highly rated coming out of high school, and both have made significant contributions on the field. Last season, Ferrell earned co-defensive rookie of the year with Lawrence. Bryant missed the first half of the 2016 season with a leg injury but came on strong toward the end of last season as he returned to health. Both Ferrell and Bryant should have productive seasons, especially given the attention that Lawrence and Wilkins command on the interior. 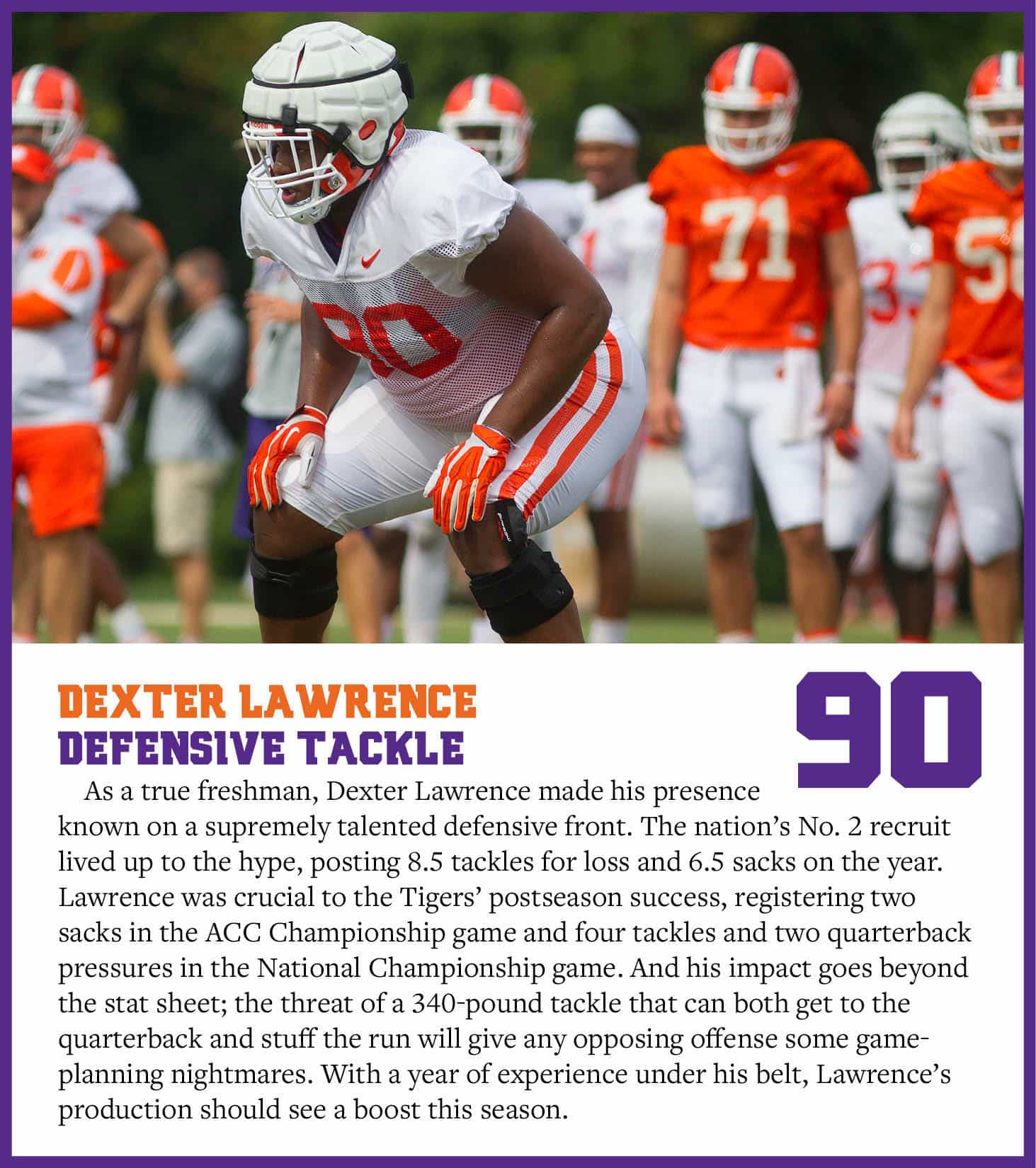 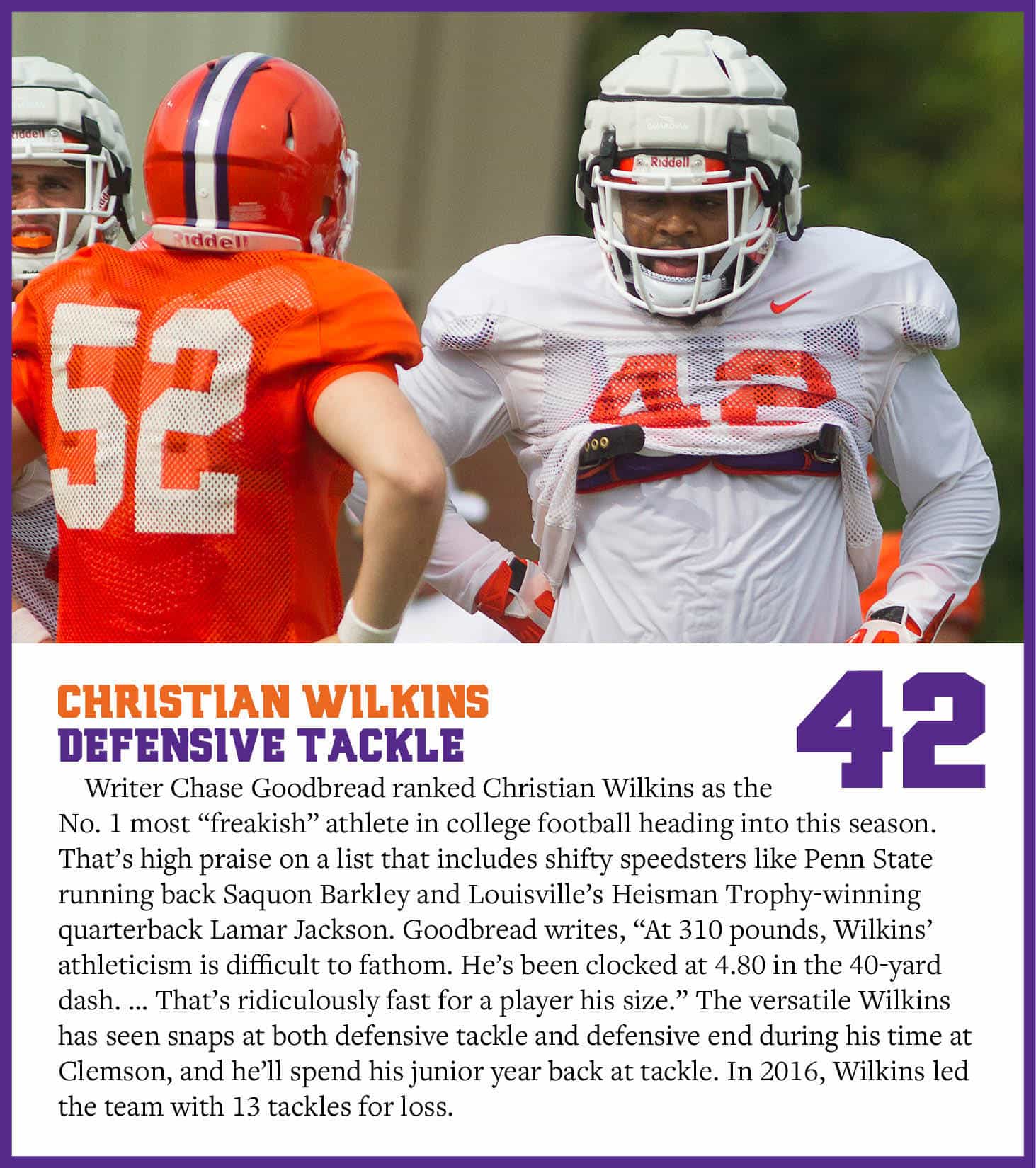 Clemson will roll out one of its most talented and deepest linebacker rotations in many years, despite the loss of defensive leader Ben Boulware. It starts with Kendall Joseph, who slides over to Boulware’s weak inside linebacker spot after starting at the middle inside linebacker spot last year. Filling in at middle inside linebacker will be highly touted sophomore Tre Lamar. He didn’t play as much as many people thought he would last year, mainly due to how productive Joseph turned out to be, but he was still effective when given an opportunity, notching an efficient 22 tackles in just over 100 snaps. Senior Dorian O’Daniel will round out the linebacker unit and is returning as starter at the strong outside linebacker spot. He’s made a point to focus on his coverage skills all offseason and looks to see his highest snap count yet. 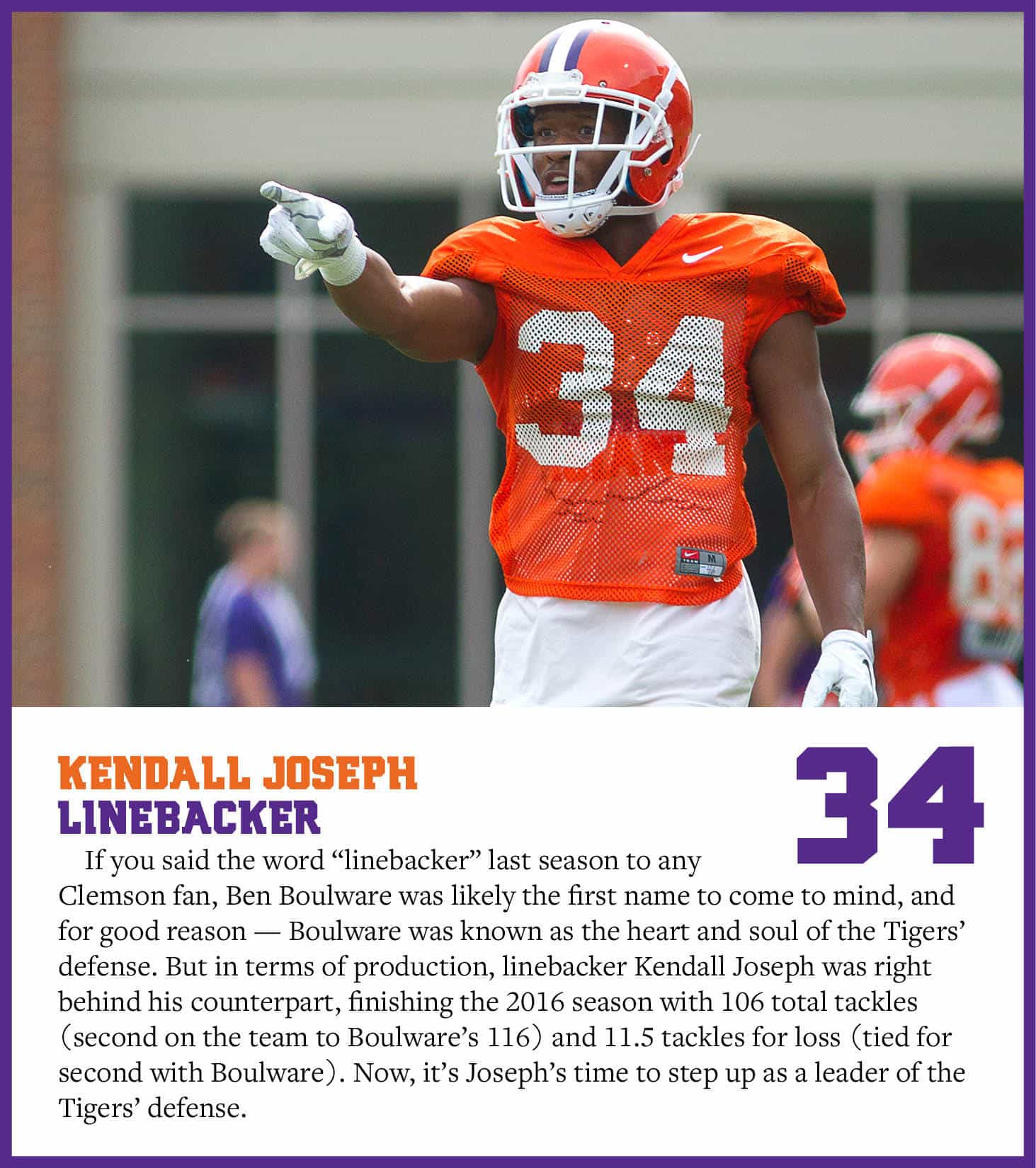 Clemson returns two starters for their secondary in 2017. Redshirt senior Ryan Carter is one starting cornerback. He’s done nothing but improve each year and has turned into a scrappy, instinctive, and consistent player. The other corner spot will be manned by senior Marcus Edmund or sophomore Trayvon Mullen. Edmund, fans may recall, made two game-winning plays last year against Louisville and North Carolina State. There’s no shortage of talent pushing these players. Junior Mark Fields, one of the fastest players on the team, should see his share of action on the field. Fans are excited to see true freshman AJ Terrell, who will bring a physical presence to the unit at 6 foot 2 and 190 pounds. Van Smith will start at free safety, and Tanner Muse will take over at strong safety. At 6 foot 2 and 220 pounds, Muse looks like he could play linebacker. Look for Venables to deploy him in run support near the line of scrimmage. 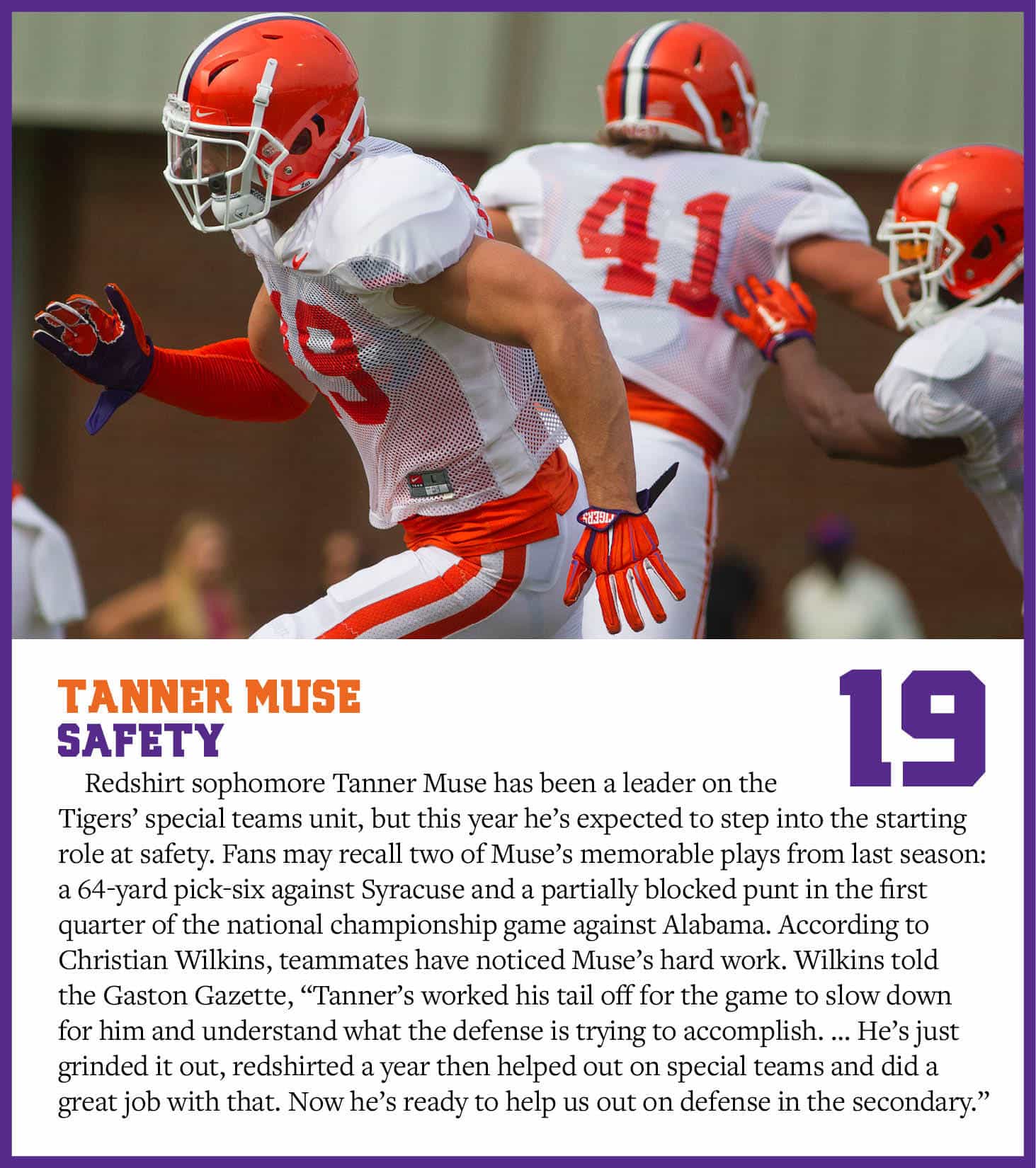 The Tigers will need to improve on kickoff coverage in special teams, as they gave up a handful of big plays in that area last season. At kicker, Clemson returns two-year starter Greg Huegel, who was second-team All-ACC and a Lou Groza Award semifinalist. He made 14 of 19 field goals last year and 71 extra points.

This article was written by Emily Pietras and Will Turbeville. 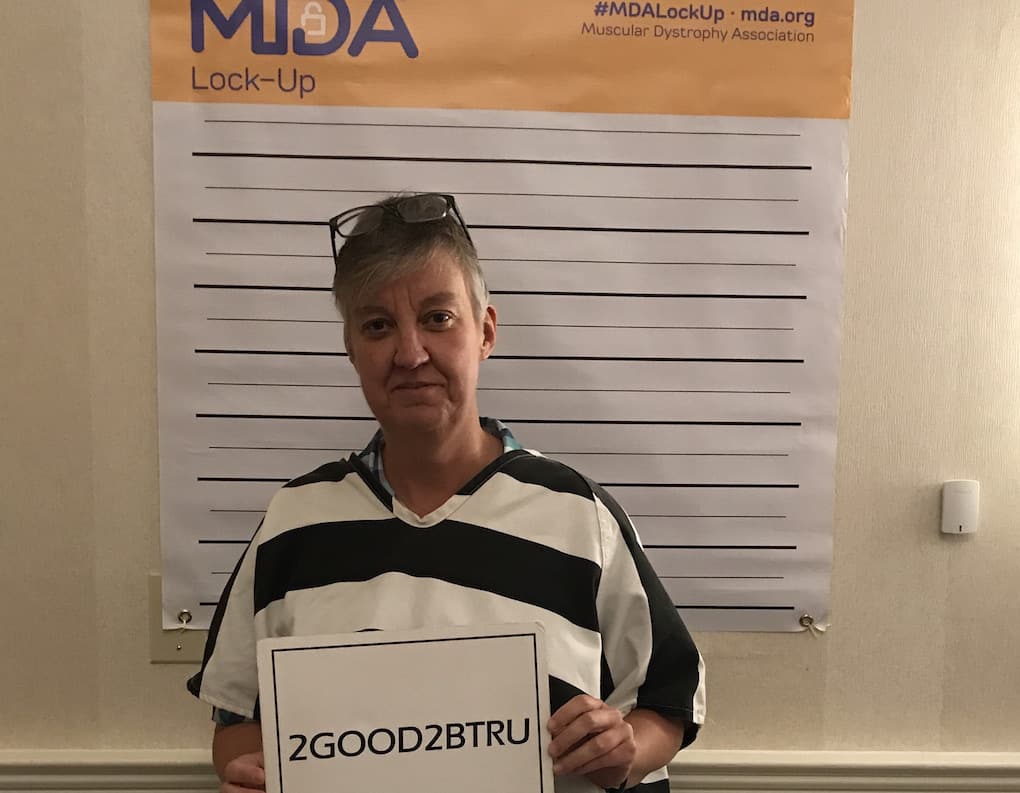 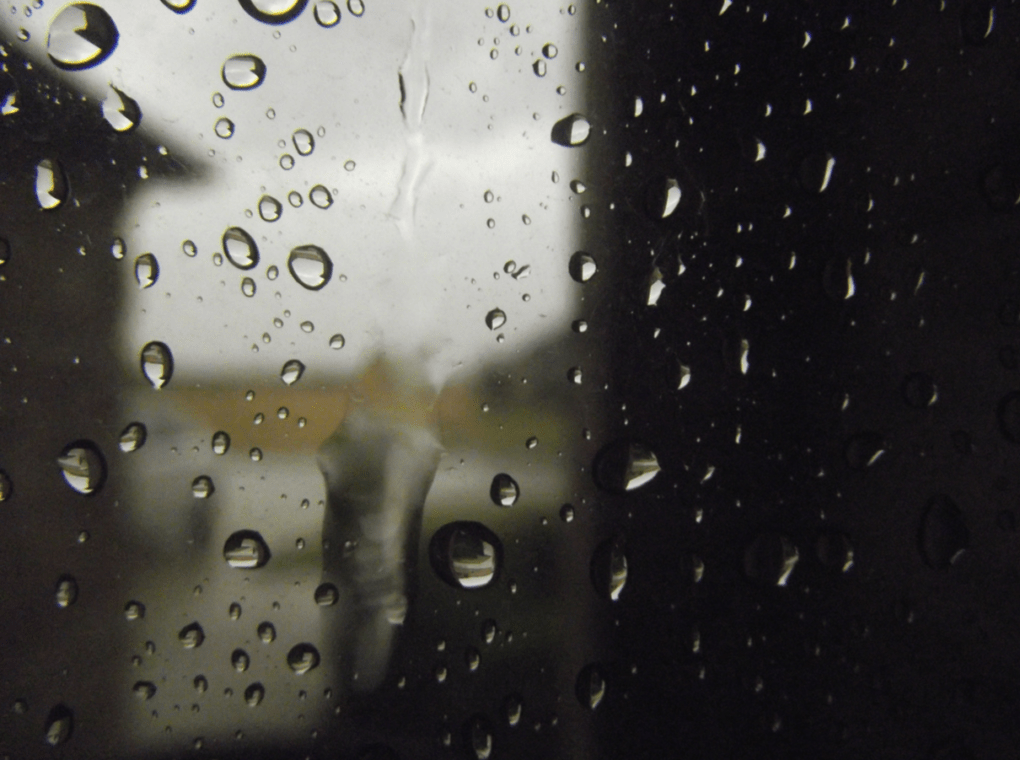