For those who are considering adoption, Katie Cruice Smith’s advice is to “be open to all possibilities.”

Smith, 41, is a parent to three adopted children and the author of the children’s book, “Why Did You Choose Me?”

She and her husband, Jamie, decided to adopt after they found out that they had fertility issues. “We decided that God was opening that door and making it very clear to us that adoption was how we were to grow our family,” Smith said. The Smiths, from Greenville, initially planned to adopt through a private agency or via the South Carolina Department of Social Services; ultimately, they worked with a local private attorney to adopt three children who share the same birth mother.

In a private adoption, the birth mother typically voluntarily places the child either with a family of her own choice or through an agency. In a public agency adoption, adoptive parents adopt a child — through DSS — whose birth parents have lost or terminated custody of them. 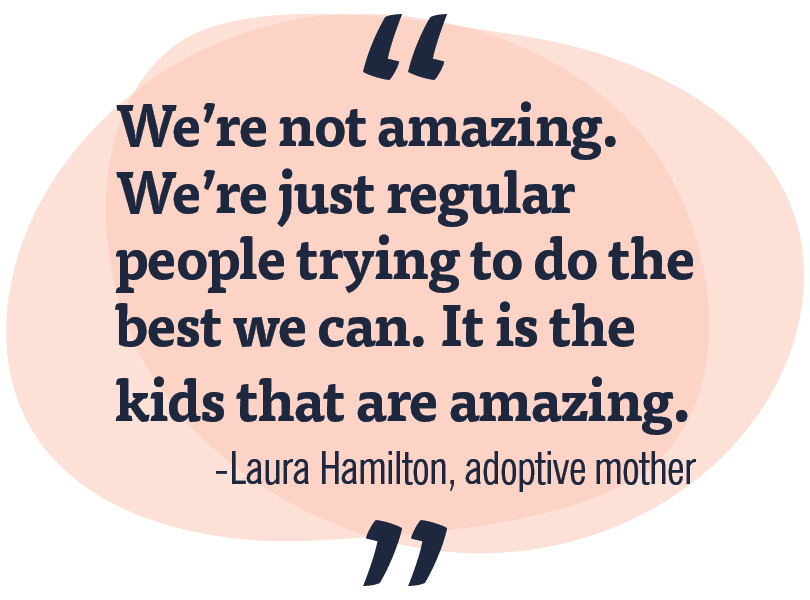 Laura Hamilton and her wife, Charlene, also of Greenville, knew that adoption was going to be their choice to expand their family, since Laura, 53, had herself been adopted. The Hamiltons had been in the process of adopting a child with special needs through DSS but ended up adopting another child after the first adoption fell through.

Hamilton said she and her wife were the first married same-sex couple to adopt in the state after the Defense of Marriage Act was ruled unconstitutional by the Supreme Court. Since then, they’ve adopted three other children through DSS.

Overall,  24% of Americans say they’ve considered or are considering adoption, according to research firm YouGov. But knowing where to begin or what sort of adoption is good for you can take time — there are lots of options, and those options can vary widely.

The adoption process-public or private?

The first step is deciding what type of adoption you want to pursue.

Casey Brown of Quiver Full Adoptions, a private adoption agency in Greenville, says that when a family contacts them looking to adopt, the agency sends out an information packet and application. From there, the family is put on a waiting list to becomes an active family in the agency. For Quiver Full Adoptions, the expectant mother decides which family her child will go to. After the child is born, the mother passes full custody of the child to the adoptive parents, which is finalized by a court. The adoption agency works with all parties throughout the process.

The Smiths used Ray Godwin, a Greenville attorney specializing in adoption, for their private adoptions. Smith said Godwin assisted with everything and walked them through the process. She also works for Godwin.

The Smiths also worked with DSS as foster parents. As someone who’s gone through home studies — home inspections and background checks to ensure the home is safe — in both private adoption and DSS, Smith said, “They just want to see that it’s a safe environment, that you have room for a child.”

Adoptions through public agencies such as DSS begin with an online application. When adopting from DSS, individuals are adopting children who have been separated from their birth families. There can be a number of reasons why the child was separated, and children adopted from social services tend to be older — meaning ages 7-18 in most cases.

After the application is submitted, prospective parents must register for training and complete all necessary paperwork. If everything goes well after a home study, the child will meet the prospective parents and live with them for several months before custody is fully awarded.

A third option is international adoption. This is similar to the others except that the child is not in the U.S. Agencies who facilitate these adoptions need to be knowledgeable about the country the child is from and what cooperation that country has with the U.S.

There’s one thing that those familiar with the adoption process want people to know: adoption does not have to be  costly.

“Having a lot of money is not a criteria,” said Hamilton. “You just have to be able to show that you pay your own bills and that you’re going to be able to care for this child.”

There are grants and funding to help if needed, especially if you’re adopting through DSS, which doesn’t charge an adoption fee — only the costs for medical checks and making a home ready for inspection.

For private adoption, the costs range from $30,000 and $40,000, according to Smith. There are ways to decrease that price, she added, including self-matching on social media, meaning the adoptive parents find an expectant mother and agree to the adoption and swap lawyer or agency information.

Challenges may come with adoption, but it’s “worth it”

It’s important for prospective parents to be prepared for the emotional toll adoption can have, not just on the adopted child, but the entire family.

“With a child accepting a new family — even if they’re an infant — at some point in their life, they’re going to realize that they had a birth family, and if they don’t know who that is, they’re going to experience some sort of loss,” said Catherine Harmon, DSS adoption administrator for the Upstate. For older children who may have been in the foster care system, it could mean having to deal with and grieve for the separation of a sibling or even leaving their hometown.

“It definitely comes with underlying grief that needs to be acknowledged and discussed and worked through in a therapeutic setting,” she said.

Resources are available, though. DSS ensures support services are in place even after the adoption is finalized. Therapy can be available, as well as services for the child such as college tuition or financial assistance to cover senior year activities, said Harmon.

One of the hardest aspects of the private adoptions was not being in control of much of the process, said Smith. “It’s an emotional roller-coaster ride, so just be prepared for that,” she explained. 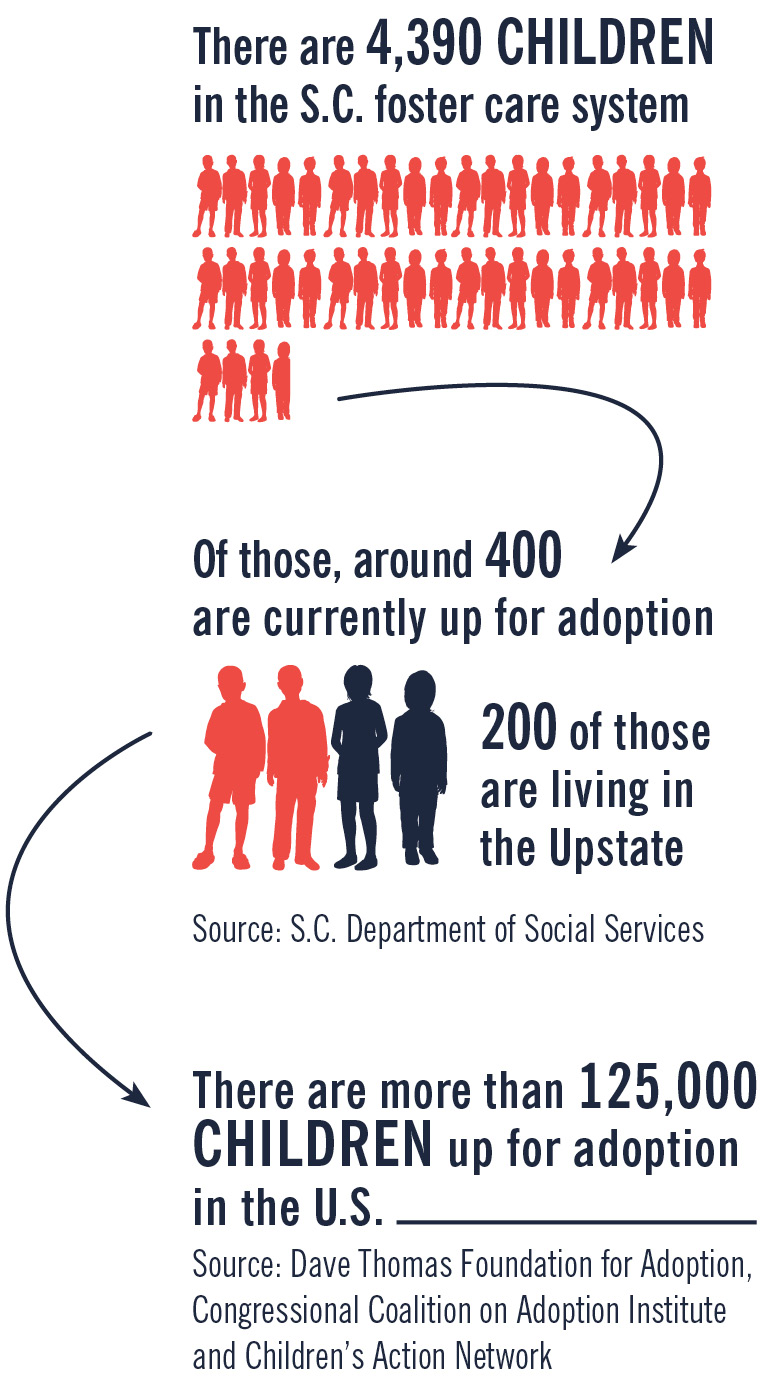 “But at the end, the process is worth it,” Smith added.

Both Smith and Hamilton recommend reaching out to the adoption community. With Facebook groups and local networks, potential parents can get quick information and support from those who have already been through or are in the process of adopting.

Adoptive parents should be prepared to work through issues stemming from the child’s past — not only for themselves, but also to be able to carry the child through them, says Hamilton. “Don’t forget to take time to step back and truly see the achievements that the child is making.”

Even with the challenges, it’s worth the effort. “We’re not amazing. We’re just regular people trying to do the best we can,” says Hamilton. “It is the kids that are amazing.”

For more information on adoption or fostering, contact Heartfelt Calling, part of the S.C. Foster Parent Association and a DSS partner, at heartfeltcalling.org or call 1-888-828-3555. 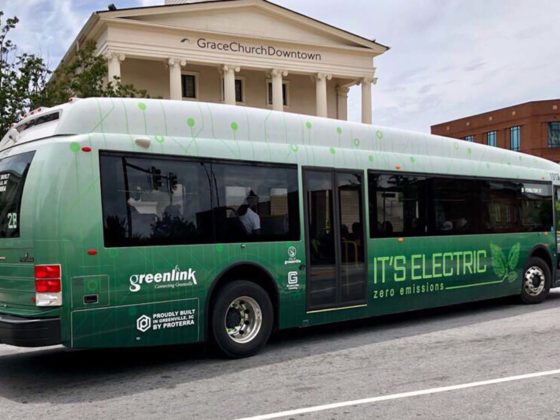