UP on the Roof, the roof-top restaurant at the top of Embassy Suites Downtown, opened Jan. 11, drawing larger-than-expected crowds throughout the weekend, a fact that was at least partially attributable to the unseasonably warm weather.

The roar of the guests on the outdoor deck Friday night drowned out the blaring top 40 music and could be heard two blocks away on street level. By 9:30 p.m., it was standing-room only on the outdoor deck, the indoor bar was three people deep and the seating was full with a constant wait.

UP, as employees call it, overlooks the Reedy River with near-360-degree views of the city, and features outdoor fire pits, bottled craft cocktails, along with a Pacific Island-inspired menu using loads of local ingredients.

The restaurant is a unique concept from Ruth’s Chris. Stephanie Malinauskas, Ruth’s Chris director of marketing and communications for South Carolina and surrounding areas, says UP may remain unique to the Greenville market.

The target demographic for UP is young professionals, says Kirk Watkins, general manager. And from the looks of the capacity crowd Friday night, it looks like the restaurant achieved that goal.

“We’re imagining guests are not going to be terribly stationary,” Malinauskas said before the restaurant officially opened, explaining why the bottled cocktails (craft cocktails pre-bottled as old-fashioned sodas on-site) would be even more important to keeping drink orders from backing up.

[slideshow_deploy id=’39069′]photos by Will Crooks

Chef Eric Omick developed the small-plate menu based on his experience living in Hawaii for years and then added Southern influences. He says the first sketch of the menu when UP was slated to open in the fall is completely different than the current one.

Currently, UP on the Roof opens at 4 p.m. each night and remains open until at least midnight. By the end of the month, Watkins says he hopes to be open at 11 a.m. daily. 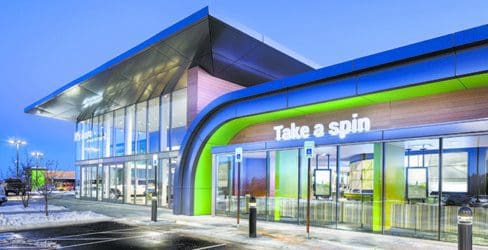 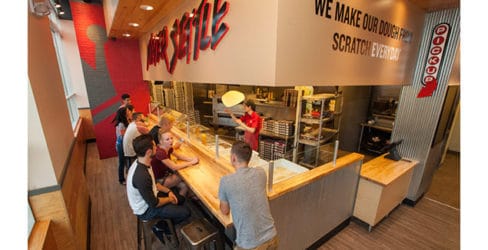 Toppers Pizza hopes to make some dough in the Upstate