The house stands out not just because it’s a story taller than the other homes on Asbury Avenue or for its flaking white clapboard. Rather, the site offers something of a soundtrack for a hard-knock Greenville neighborhood that’s heard its share of the blues.

“I know of them through my family telling me stories,” Traa Lake says of such African American musicians as Sarah Vaughn, Duke Ellington, Ella Fitzgerald and others who stayed in the Southernside home where, beginning in 1963, she grew up.

Today, Lake, a 24-year employee of the U.S. Postal Service who no longer lives on Asbury Avenue, is working on renovating the house in the middle of a three-block stretch originally called John Street. Two blocks away, an even bigger revitalization is underway: the 65-acre Unity Park.

“During segregation, they were not allowed to stay in the white hotels,” she says, so traveling black artists used the three bedrooms upstairs in the 11-room home.

In the 1950s, the home was listed in The Negro Motorist Green Book, which provided “the Negro traveler information that will keep him from running into difficulties, embarrassments.”

‘The end of the line’

Stacey D. Mills says he witnessed much worse when he became pastor of Mountain View Baptist Church, erected two years before Lake’s house was built and a half-mile away from the home at 212 Asbury Ave.

When Mills arrived in Southernside 22 years ago, many of the shanties, as he calls the now-razed properties surrounding the church, had decayed and become uninhabitable.

The area, wedged between downtown and the Reedy River, is historically a predominantly African American neighborhood. The city’s Southernside Neighborhood Vision Plan said in 2011 that the demographics comprised 70% black, 23% white and roughly 5% Hispanic.

“The existing diversity in Southernside,” the 71-page report says, “is seen as a valued asset of the community. It is important that the vision plan aims to foster cultural heritage and neighborhood tradition.”

‘We were all family’

Mary Duckett, a longtime activist who grew up in Southernside and still lives there, remembers shooting marbles and playing in the blacks-only Mayberry Park, abundant with warehouses and coal ash — “we had no idea it was hazardous to our health.” 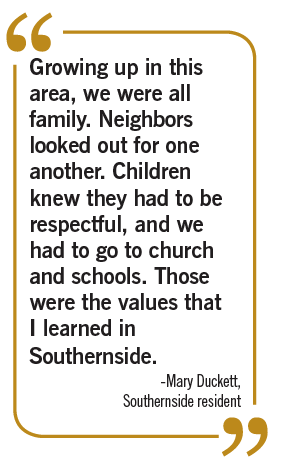 “Growing up in this area, we were all family. Neighbors looked out for one another. Children knew they had to be respectful, and we had to go to church and schools,” Duckett said. “Those were the values that I learned in Southernside.”

The 1960s brought the neighborhood’s collapse, she says. “Growing up, it was the good. The white flight was the bad. The drugs coming in was the ugly.”

Of the $41.2 million Unity Park, which is expected to open in October 2021, she says, “The word ‘unity’ speaks volumes in itself because it says inclusiveness, and with it being in Southernside, which has been one of the most blighted areas, it’s one of the greatest things that can pull us together.”

Says Mills, “The pride here is so thick for people who find strength and togetherness and remembering and identifying common memories. Enter Unity Park. It’s a place where the unity of people, of thoughts, of all backgrounds, socioeconomic backgrounds, can converge.”

Of concerns about gentrification, he says, “That train left the station. As Greenville continues to thrive and grow, so the neighborhood has to put a stake in and decide what part they will play in making this a viable community.”

For her part, Lake is working on getting help from a variety of sources, including city and state agencies, to repair the home that was damaged in a 2010 fire.

Meantime, J.D. Harrison, owner of CR8 Design Studios in Greenville, signed on six months ago as project manager for the historic home, where Lake also mentions that Kidd Smith died of asthma on the front porch in 1935.

“I believe the fact that it’s still standing says a lot,” Harrison says, as if reflecting on Southernside as a whole. “Throughout the history, the good times and bad and the torment, you know, it’s still here.”