When I first told you about the Upstate Music Awards in November, I didn’t know what to expect. I knew that I was excited about the idea that Future Chord’s Jeremy Theall and the Radio Room’s Wes Gilliam brought to me, the idea of honoring musicians making original music in our area. And I knew I was honored that they wanted to make me part of it.

But I wasn’t sure how much of a response the awards would get. I wasn’t sure if the Upstate music scene was going to be as excited about it as I was. Truth be told, I had my doubts about whether this fantastic idea would even get off of the ground.

But our music scene and the Upstate as a whole have given us a resounding response. Between Nov. 27 when the Upstate Music Awards website debuted, and Dec. 27, when the nomination period ended, more than 400 submissions from artists and fans were received.

We have nominees from just about every genre, including country, rock, folk, hip-hop, and electronic dance music. There are scores of EPs, full-length albums and music videos vying for the Best Of honors, and dozens of artists up for various awards, from Best Solo Act to Best Live Act to the 864 Award, which honors community service and advocacy.

There are people up for awards who I’ve been covering for years mixed with artists I’d never spoken with before. There are rappers sitting alongside pure-country singers, and DJs in the same categories as folk singer-songwriters. The field is as wide as the music scene itself, which is about all you can ask for when you try something like this.

And local businesses have taken notice. My wonderful colleagues at the Greenville Journal were the first to join as partners, and we were soon able to form additional partnerships with the radio stations Hot 98.1, 107.3 Jamz, X98.5 and 99.5 JACK FM.

In short, the response has been overwhelming, and I’m very grateful to every artist and fan who visited https://upstatemusicawards.com/ and submitted. 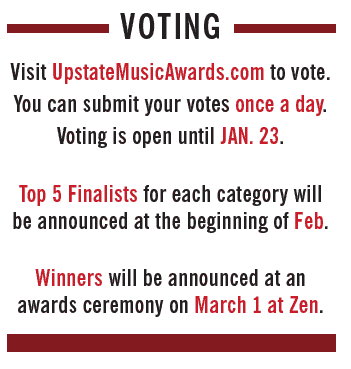 Now you come through for us, and for your favorite musicians, one more time. We’ve opened up the voting on the UMA site, and you’ll be able to vote on your favorites in our 13 categories until Jan. 23. You can vote once a day up until the 23rd, and we want you to tell every local music lover you know that they can make their voices heard about who makes the best original music in the Upstate.

We’ll name the top five finalists in each category at the beginning of February, and then announce the winners at an awards ceremony on March 1 at Zen-An Elegant Place For Hire in Greenville. We’ll have more details on that event soon, but for now, you’ve got until the 23rd to log on, vote and put your favorites at the top of their categories.

It’s a wonderful thing to see the Upstate take an interest in local, original music; your response has shown us, our partners and sponsors that it’s the right time. So go forth and vote. Let’s do this.

Singer Jamie Wright overcame bullying and stayed true to herself