David Sims is a veteran Upstate musician who’s probably best known as the singer/bassist for The Lackies. So it might seem like his new undertaking, the Greenville Music History Project, was a natural next step.

The Greenville Music History Project is a website and companion podcast that both dive deep into the venues, musicians and genres that have called Greenville home. A visit to the soon-to-be-completed site or a listen to the podcast might teach you about Greenville’s lost vaudeville houses, iconic bluesman and activist Josh White, or about the many great bands who played at the Greenville Memorial Auditorium.

But in truth, Sims had no intention of creating anything like this; he was just trying to learn about his family history.

“It’s weird because I’m not really a history person,” he says. “But it started because I was doing a family history project. When you get over 40, you start to care about history. I started doing some research and I learned that one of my ancestors started one of the first bakeries in town.”

“Basically, I’m going through every newspaper from every month of every year that is accessible online and scouring it for music-related information.” – David Sims, musician, founder, Greenville Music History Project

Sims started combing through archived newspapers, looking for ads for his family’s bakery. And in the process, he inadvertently launched the Greenville Music History Project.

“It just became really fascinating to me because it was history that was tangible,” he says. “It became interesting to me to learn about what people did to entertain themselves back then and I started running across these music venues from the 1800s, one of them called the Grand Opera House, which had scores of performances each year from national touring shows.”

The more Sims learned, the more he felt the need to create some sort of resource where others could learn about the Upstate’s surprisingly rich musical history.

“There were so many fascinating people and stories and venues and music that came from this area that nobody knows about, except for maybe a few historians,” Sims says. “So I started to reach out to some local history people and started to develop the idea of making it into something that could be accessible to the public, so that if you want to search music from a particular era or to see the evolution of vaudeville houses in Greenville in the early 1900s, you could do that.”

Sims’ podcast will include notable local figures like The Handlebar’s former owner, John Jeter, and he hopes to have the website up by this summer. He recently received an Individual Artist Grant from the Metropolitan Arts Council to get the Greenville Music History Project off the ground.

“It’s just mind-blowing when you see the timeline, because it’s amazing.” – Sims

“The podcast will be a few episodes in before the website becomes active,” he says, “but on the website, you’ll be able to search a timeline. Basically, I’m going through every newspaper from every month of every year that is accessible online and scouring it for music-related information. Then I put all that information in that timeline.”

Sims says that this project is important to him because, as an up-and-coming musician in the 1990s, he didn’t really know that Greenville HAD much music history.

“Maybe it was just because I was young but I never really thought of Greenville as a huge music town,” he says. “And a lot of people see Greenville as a place where folks stop for a minute, but not a place that really fosters its musicians with a thriving music scene.  But the more I dug, the more I found that there was so much stuff going on. It’s just mind-blowing when you see the timeline, because it’s amazing.” 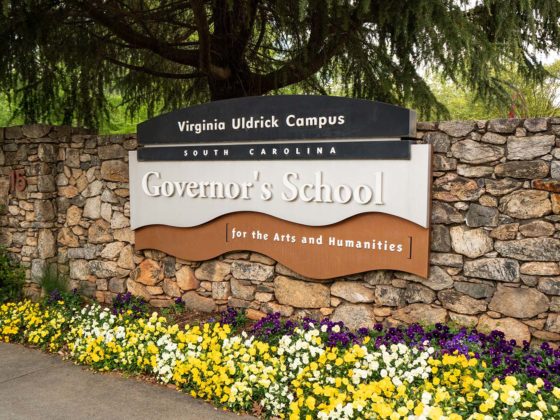