“I see my world. I see my tribe. And I’m like, this is just beautiful,” Marjorie Boafo Appiah says.

Originally from Ghana and now living in the Upstate, Appiah shares a fictional story that touches on real-life immigration stories today in “The Shimmigrant.”

Shimmigrant: a female who lives permanently in a foreign country she calls home

“The Shimmigrant” follows the story of a young maidservant named Obaa Yaa Sasha. The book allows readers to learn and experience the ins and outs of immigration, as well as the importance of culture.

Appiah, also known by her pen name Marjy Marj, explains that the book title is a play on the words “she” and “immigrant.” Appiah also calls male immigrants “himmigrants” and teen immigrants “timmigrants.”

“Although the story is fiction, it’s very real,” she says. “Whatever hardships this young girl goes through shows you that perseverance does pay off, and that it’s good to have hope and not despair.”

Tears were shed by Appiah herself as she penned the words of “The Shimmigrant.” She wants readers to be inspired to never give up no matter how bleak the situation may look.

As Appiah’s first published book, “The Shimmigrant” has received much praise from diverse readers. Amazon also named the book a No. 1 new release earlier this year.

“The Shimmigrant” has also been chosen as the spring Preface option for off-cycle English 101 students at University of South Carolina Upstate. Preface is a first-year reading and writing program. 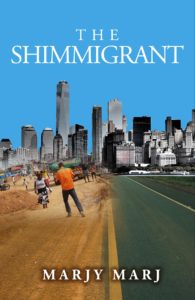 In addition to being an author, Appiah is a wife, a mother, and the owner of a management consultant business. Learn more about Appiah at marjymarj.com and find her book on Amazon and Barnes & Noble.