A Greenville resident since 2014, printmaker Sylvie Bucher thinks of the city as her “playground.”

According to her artist statement, Bucher creates art as a reaction to her surroundings. “I never know what my artwork will be. … I explore every common thing and especially letters [and signs] we don’t pay attention to.”

Manhole covers, forgotten signs, and the faded letters of old street signs – these often-overlooked boundary markers and identifiers of our modern society fascinate Bucher and populate her recent work.

After graduating from school in her native France in 2000, Bucher spent 14 years leading and creating workshops for the disabled in different locations in France, Finland, and Canada. But after moving to the United States, she has begun working on personal projects again.

Bucher doesn’t set out to create specific works; she is “always on the road, looking with a sharp eye for the subject of my next piece.” After taking in the various sights on whatever “urban trail” she chooses to trek across, she reflects on the things that caught her eyes, and the rubbings of the textures she encountered along her way. After reflecting and processing, sometimes for months, the works she creates offer a unique way of seeing Greenville and the parts of it usually overlooked.

Under her gallery of work on her website, Bucher explains, “I reinvent the picture of a city, street, or neighborhoods by interlacing all kind of signs, hand-lettering, pictograms… like a travel diary full of unexpected events.”

Most of her work features one or two colors, mixed with strong contrasting lines and patterns in black and white or sometimes earth tones. For Bucher, the contrast is an ode to black-and-white street photography, a genre of art born from the act of exploring city streets looking for a fresh way to see the ordinary.

The most prominent symbol in Bucher’s work, besides bold lettering, is the repetition of fish. Some works, like “Broad Street,” feature a single fish, colorful and bright, almost lost in a sea of letters from road signs. In works like “Main Street,” the fish overwhelm the words, jumping over each other in a frenzied pace.

This interplay between the fish and their wordy surroundings reflect how we as humans are often unaware of the details of our urban lives, sometimes seemingly lost among the mindboggling amount of information around us, and yet always pulled back into the hustle of the crowds of city life. 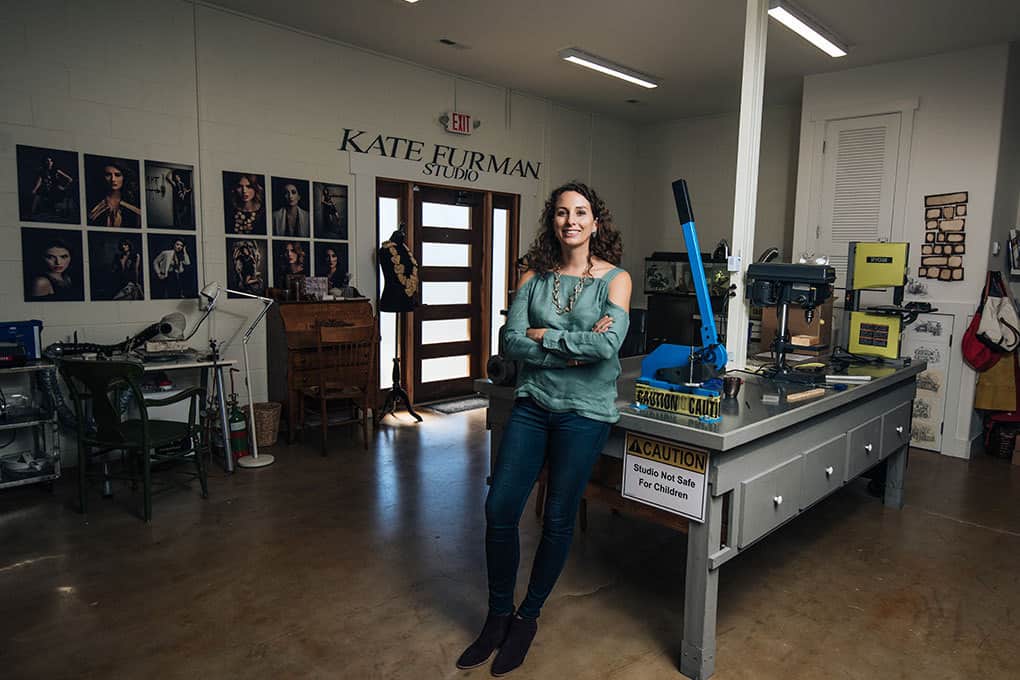 Kate Furman unleashes the natural beauty of the objects she collects